The mood around Goodison Park has been lifted massively in the few weeks since Lampard was named the successor to Rafael Benitez. While they failed to get a perfect start under the new manager, falling to a 1-3 defeat at Newcastle, Everton bounced back in their recent match against Leeds United, securing a 3-0 win. Many players have shown improvements over the recent week and seem to have regained their confidence. The Brazilian midfielder, Allan, is one of those players who has looked rejuvenated in recent weeks. He has featured in every match under Lampard so far and has been one of the Toffees’ standout performers.

Since signing for Everton in 2020 during Carlo Ancelotti’s time in charge, Allan has been a prominent part of Everton’s midfield. He featured regularly under Ancelotti and maintained his place in the starting XI during Benitez’s turbulent reign as manager. Under Lampard as well, Allan has looked impressive in his role in the midfield pivot. His importance is further highlighted by the fact that he is the only player in the midfield pivot to have maintained his place in all three matches so far under Lampard.

In a recent interview, Allan expressed his desire to stay at Goodison Park and win a silverware. The midfielder also believes that Lampard’s arrival has been crucial for his side as the former Chelsea man has inspired the squad, giving them the confidence to demonstrate on the field. So far, Allan has made 19 appearances in the Premier League this season.

Let’s take a look at his stats to gauge his performances as Everton’s box-to-box defensive midfielder. 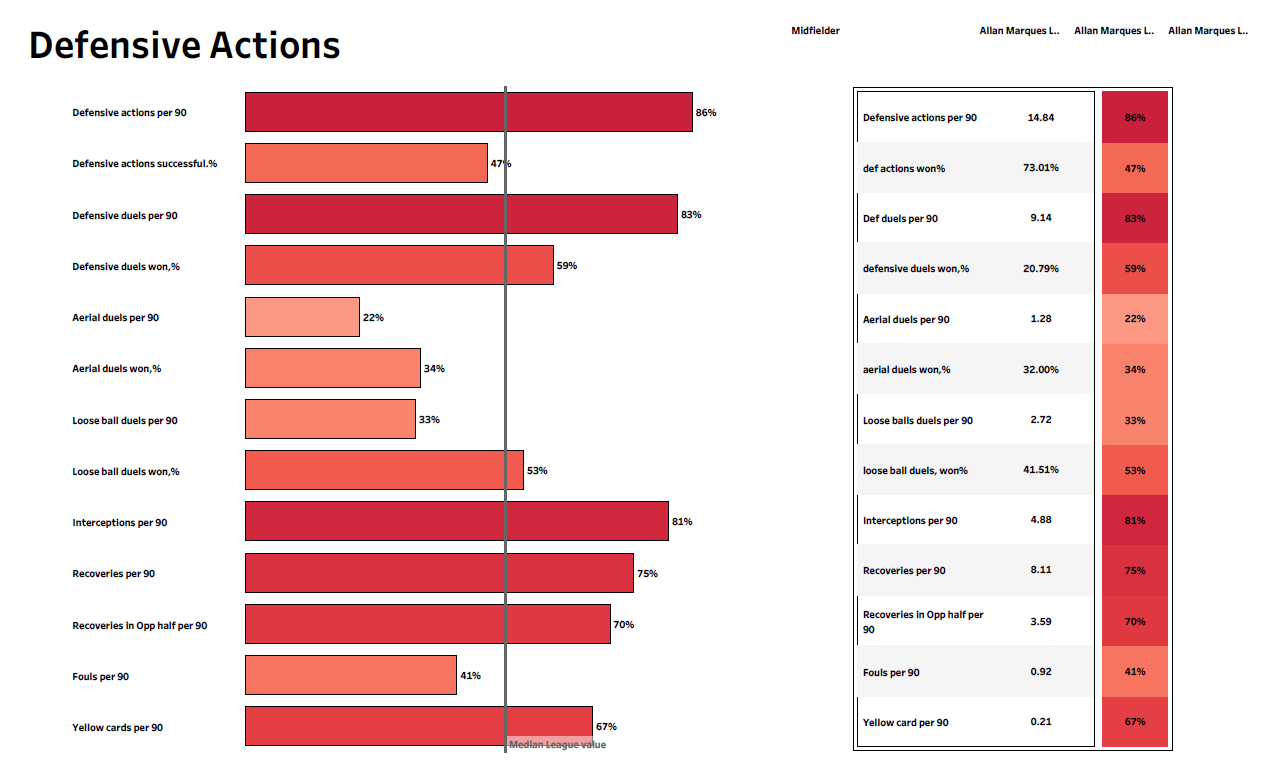 In the above viz., we can see Allan’s defensive stats so far this season. While there are some areas where he has fared below average, a case mirroring Everton’s overall form in the league, the majority of Allan’s stats surpass the league median. We can see that he has fared well in terms of defensive duels per 90, interceptions per 90, recoveries per 90, and recoveries in the opponent half per 90. Allan has been known as one of the best box-to-box defensive midfielders. His ball-winning ability combined with technical ability allows him to progress the ball in the midfield effectively. The Brazilian is an influential part of the build-up for his side, possessing excellent passing range and vision. 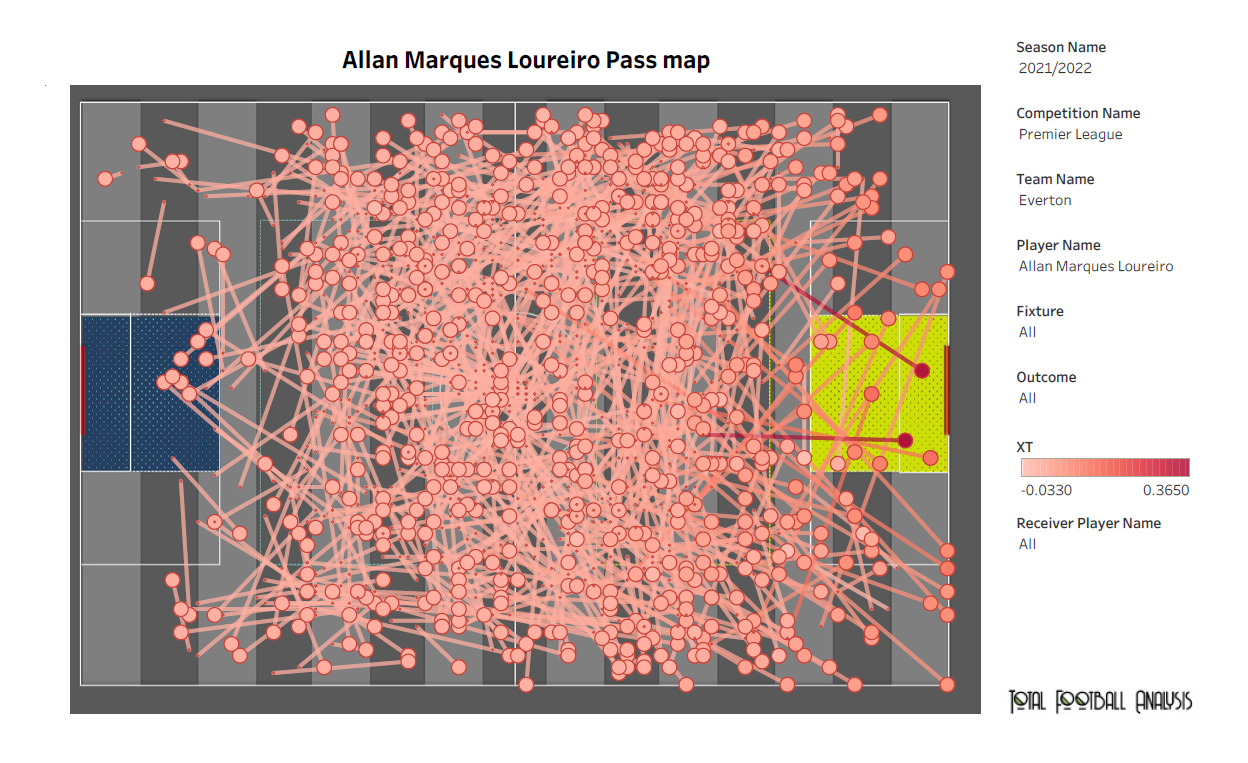 The above viz. highlights the locations of the pitch where Allan delivers his wide array of passes. We can see that he has delivered his passes all over the field. Several of his passes have been made in the final third of the pitch, which further indicates his importance during the build-up phases. Allan can pierce opposition defenses with his passing and is adept at pressing his opponent. His quality in creating room for himself and exploiting the space behind the opponent is impressive as well. 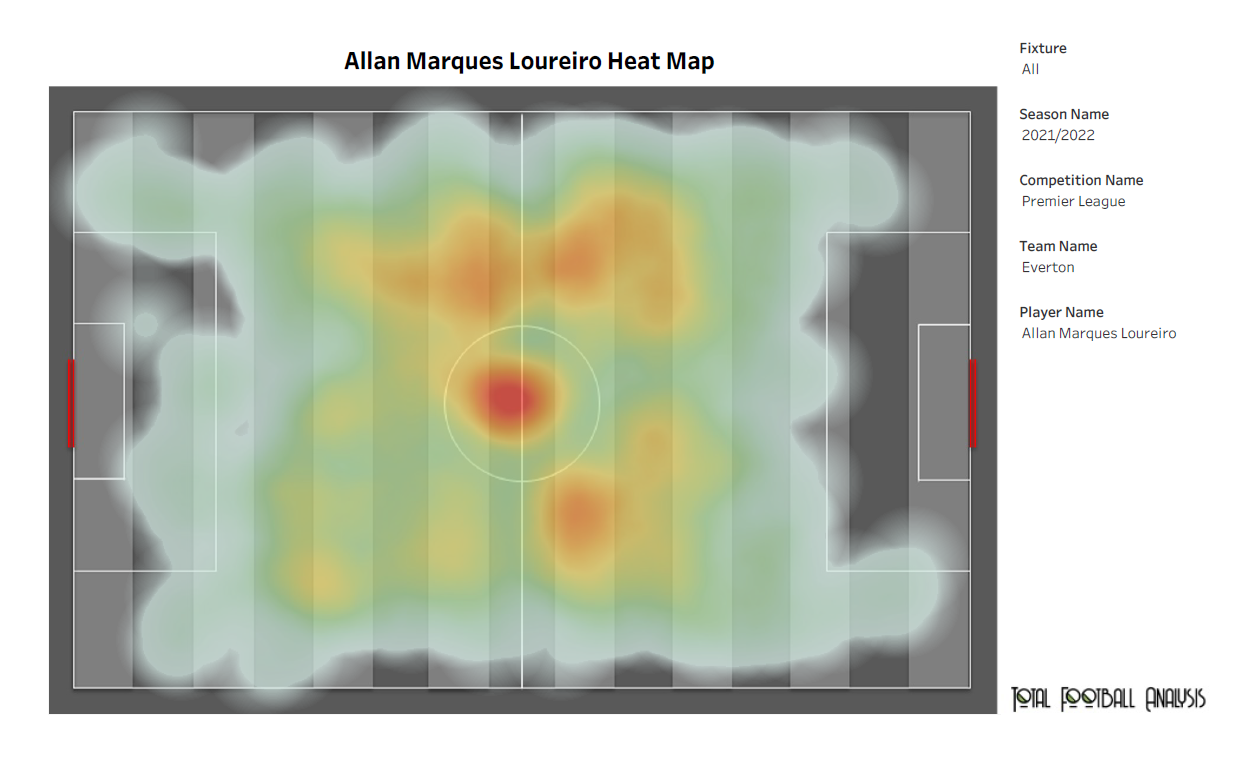 Allan’s extensive work rate is evident in the above viz. The midfielder is known for his work rate off the ball, and his constant hounding and pressing of the opponent is instrumental for his side breaking up the opposition play. We can see that he has covered vast spaces on the pitch. In Lampard’s first two game’s in-charge, Allan operated in the midfield pivot in a back-three formation alongside Andre Gomes. However, in the recent win against Leeds, Allan was deployed with Donny van de Beek in the midfield pivot in a 4-4-2 system. The Brazilian’s experience of playing in a 4-4-2 was evident during the match as he kept things tidy in the midfield, managing the opponent’s press effectively. He was positionally impressive as well.

Allan looks set to keep his place in Lampard’s midfield, especially in the absence of Abdoulaye Doucoure. His stats and performances indicate that the Brazilian is set for an important role as a box-to-box defensive midfielder in Everton’s midfield pivot.