Everton have joined the English Premier League clubs like West Ham United, Leicester City and a few other European clubs to sign the young Belgian midfielder, Amadou Onana. The 20-year-old joined Lille at the start of last season from Hamburger SV and has caught the eye of a lot of clubs. He found himself in the midfield on 43 occasions last season in all competitions for the French side. Onana has also made his international debut and is regarded as one of the best upcoming talents in the country. Some of the stats from the UEFA Champions League 2021/22 show why Everton have shown an interest in the midfielder. 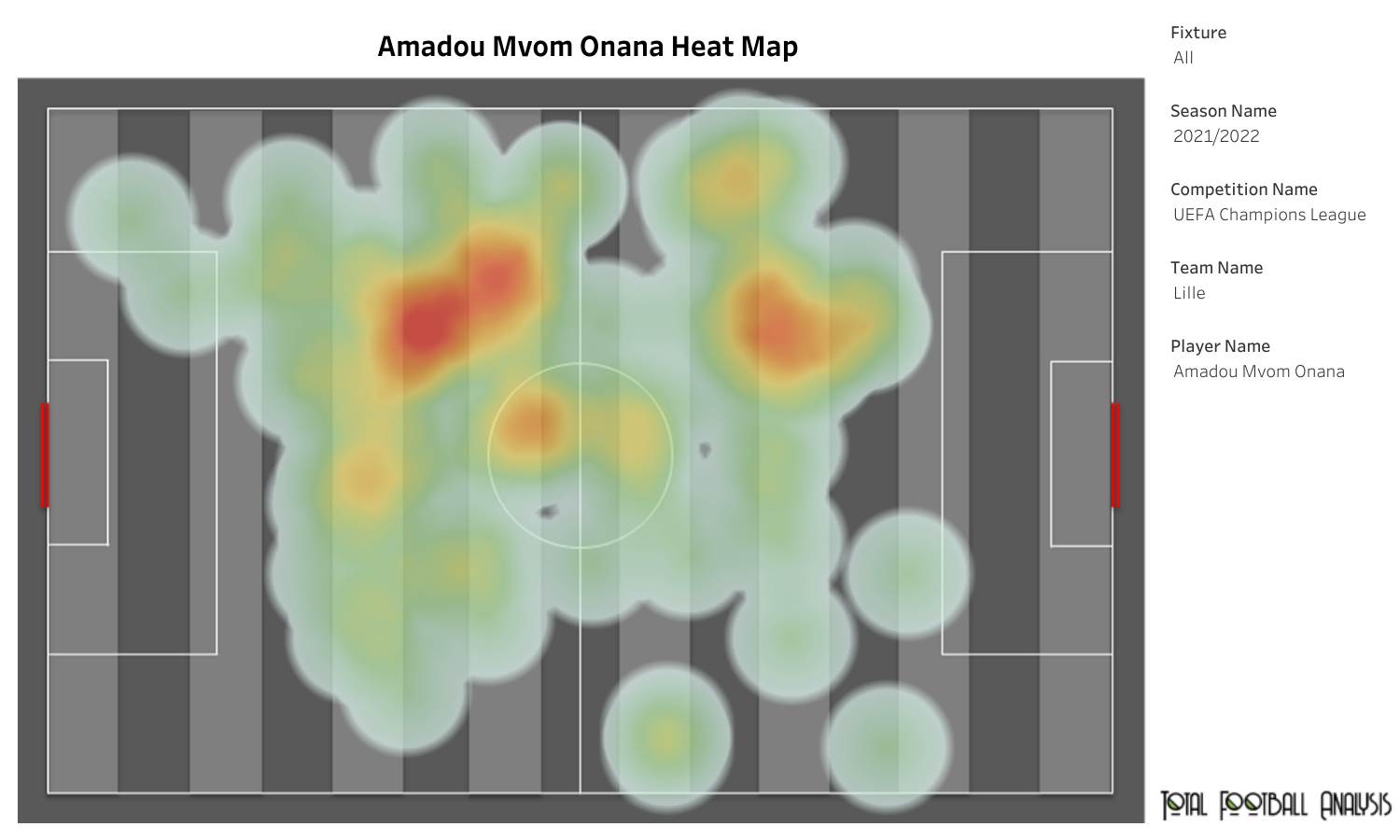 Onana appeared in nine UEFA Champions League matches. He started in two matches, and one was against Chelsea. The above viz shows the heat map of the player in the elite competition. Onana played the defensive midfielder role. He played towards the left side and often got involved in the play in the attacking third. The 20-year-old was involved in 4.3 attacking actions per 90 minutes but had a low success rate of 35.7%. He attempted two shots but was unable to hit the target on both occasions. 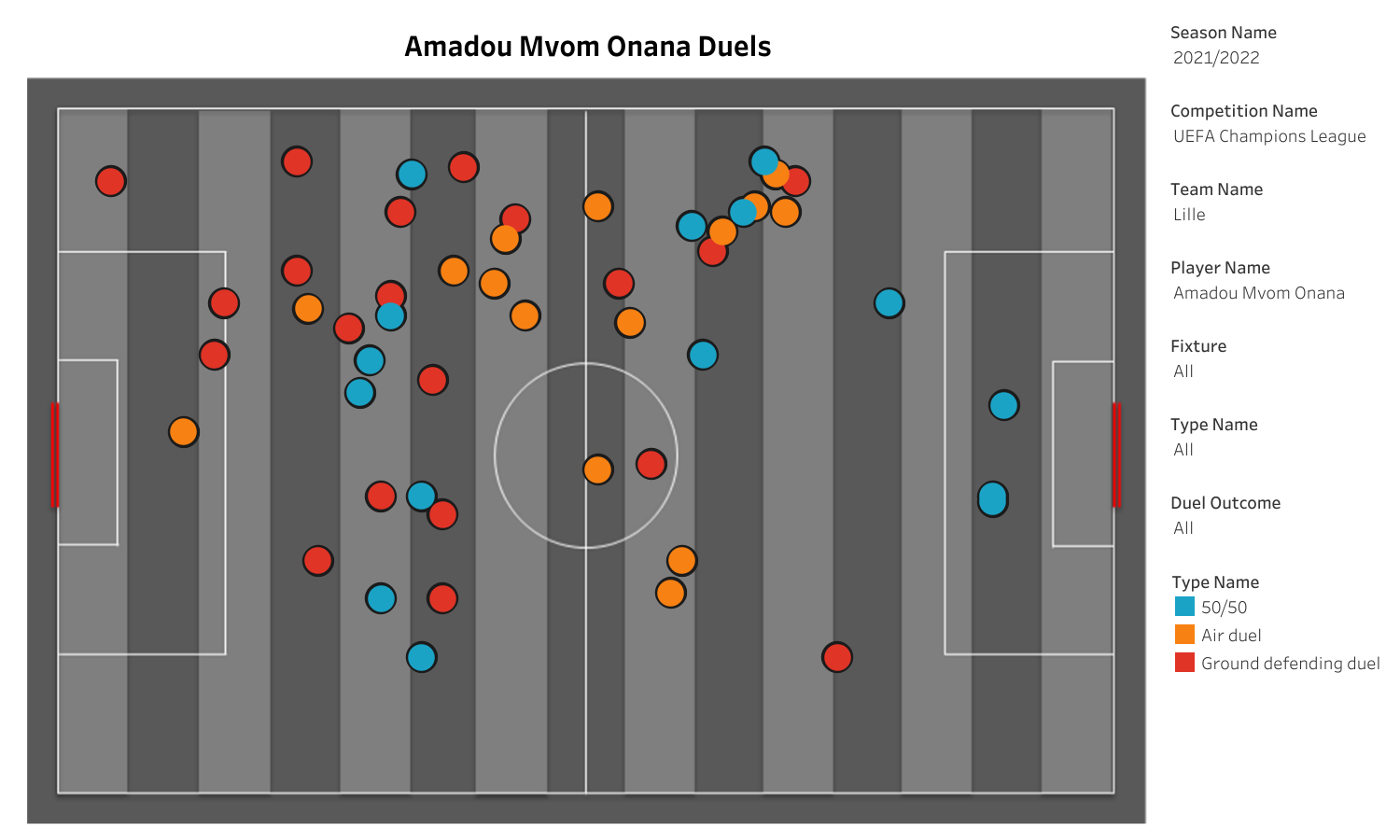 Regarding his defensive side, Onana showed his A-game. The midfielder was involved in 10.1 defensive actions per 90 minutes and was successful 85% of the time. The above viz shows all the duels that were contested by Onana. He contested 6.12 defensive duels, 4.6 aerial duels, and 4.6 loose ball duels per 90 minutes. The success rate of the youngster was high at 45% for defensive duels, 53.33% for aerial duels, and 40% for loose ball duels. Other than this, he made 2.45 interceptions and 8.27 recoveries per 90 minutes. Onana won the ball for his team on many occasions and broke the play of the opposition. Everton need a defensive midfielder who can perform consistently. Onana is still young and could be groomed into a perfect defensive midfielder, which the Toffees want. 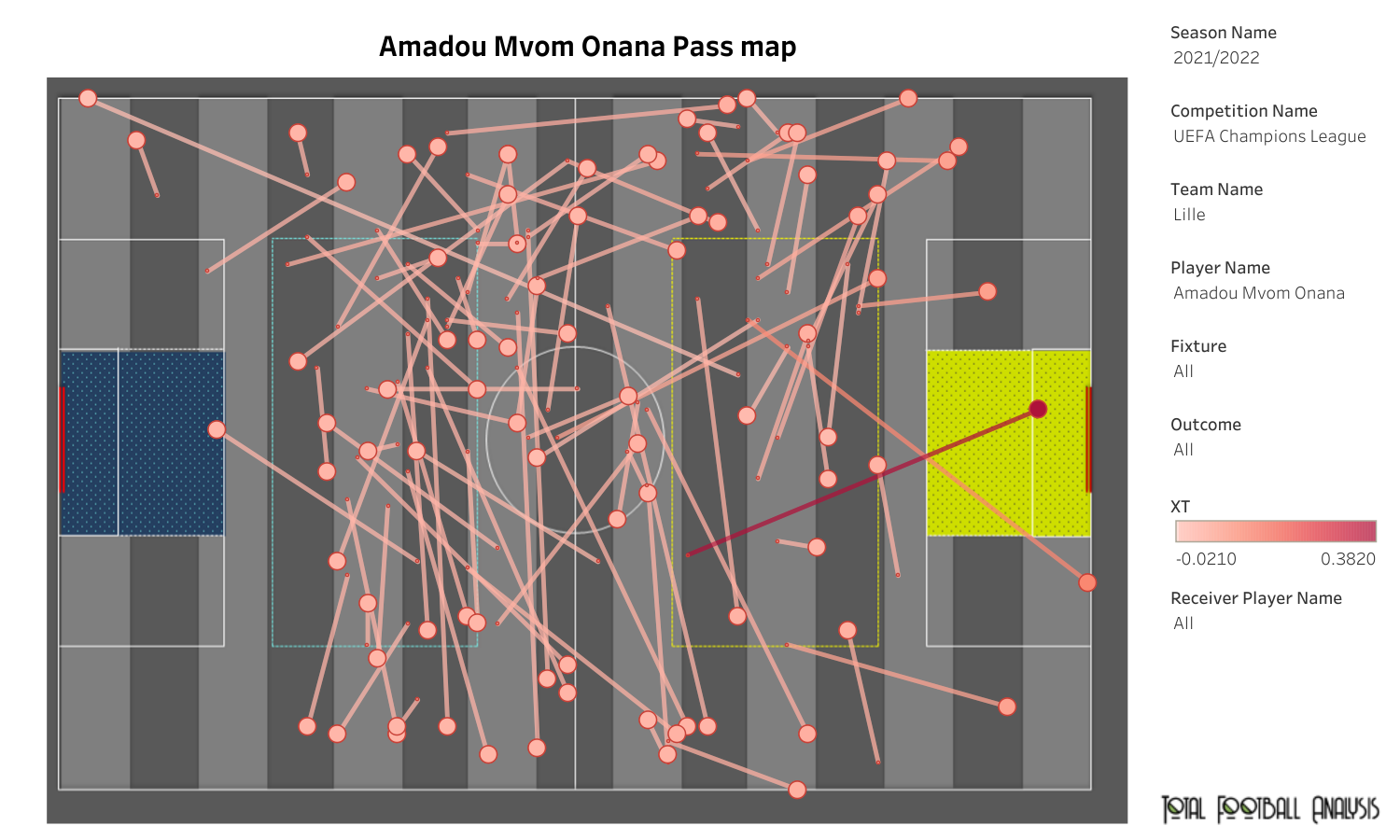 Onana averaged 26.6 passes per 90 minutes and had a low accuracy rate of 79.3 in the UEFA Champions League. He was given fewer minutes and was more involved in clearing his defensive line. Therefore, the player averaged low in the competition. Onana mainly distributed the ball towards the wings and attempted one or two passes to find a teammate inside the opposition’s penalty box. Most of his passes were towards the left-winger, Jonathan Bamba, and he was followed by the two full-backs, Tiago Djaló and Mehmet Zeki Çelik.

The young Belgian showed his defensive abilities last season and gained the interest of a lot of clubs. Lille might look to cash in on the youngster if they receive a good amount. Everton need a defensive midfielder, and Amadou Onana could solve their problem for the next few years.