Everton’s problems with consistency have not improved under Frank Lampard. The former Chelsea manager, who was appointed in charge of the Toffees in January, has seen his side struggle to put up consistent performances. Following their massive injury-time win against Newcastle, Everton were thrashed 0-4 at Crystal Palace in the FA Cup quarter-final. While Everton possessed the momentum during the first quarter of an hour, Andros Townsend’s injury and subsequent replacement saw the game turn on its head.

Crystal Palace started dictating the play after 20 minutes and got the lead via Marc Guehi. Jean-Phillipe Mateta then doubled the advantage for Palace before the break. Wilfred Zaha and Will Hughes sealed the win for Palace as they progressed to the semi-finals of the FA Cup. Everton’s defeat against the Eagles proved to be a grim reminder of their ineffectiveness to build on their momentum. The team looks short on confidence and will have a tough time ensuring survival in the Premier League amidst a tough round of upcoming fixtures.

Everton have struggled massively in the midfield this season, and they lack alternatives in the middle of the pitch.  One of the midfielders who has struggled to put up consistent performances this season is André Gomes. The Portuguese international was deployed alongside Doucoure in the midfield. Often this season, Gomes has offered little in the attacking half and has been a liability off the ball. His performance against Palace was similar, as he was ineffective for the vast majority of the match.

Despite getting opportunities, Gomes has struggled to cement his place in the starting XI since his move to Everton from Barcelona, and the Goodison faithful have lost confidence in the midfielder’s abilities.

Let’s take a look at his stats to gauge the midfielder’s struggles. 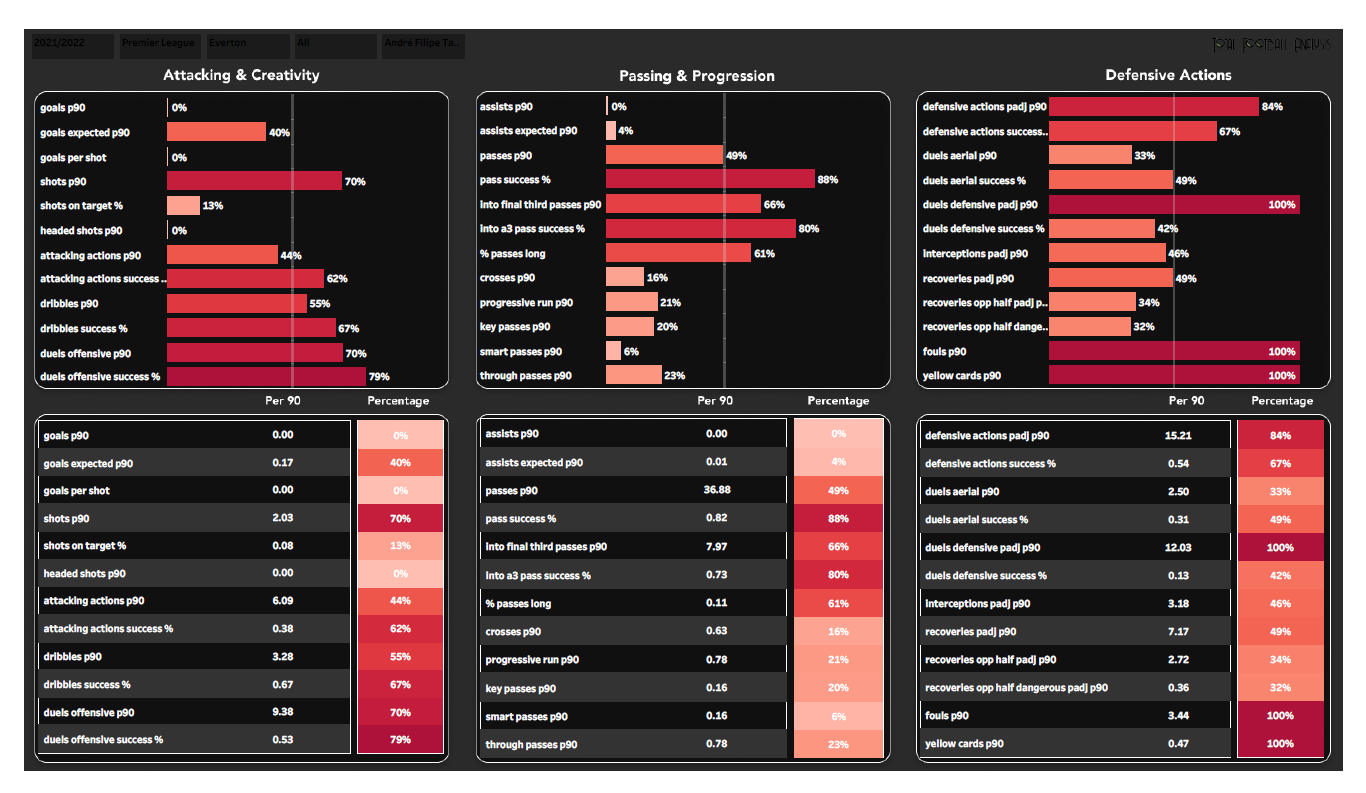 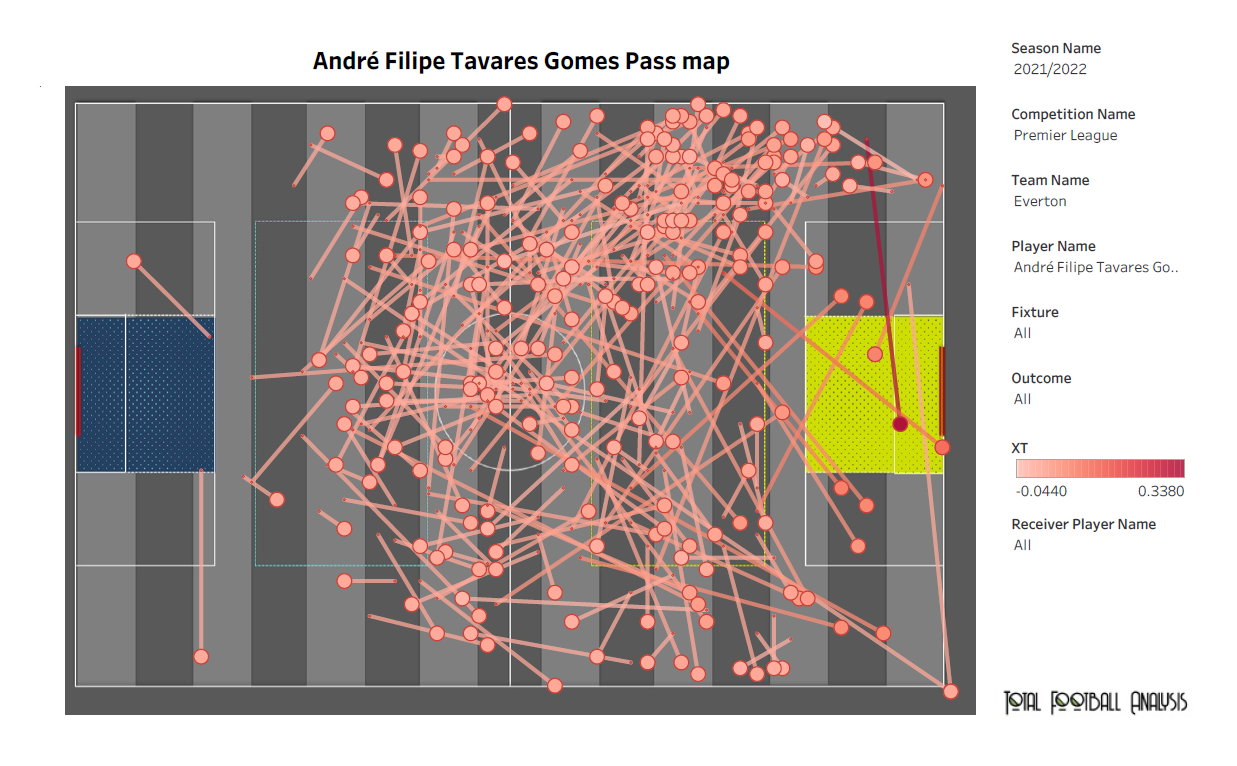 The above viz. displays the passes made by Gomes this season. We can see that a vast majority of his passes have been sideways and backwards, with very few threatening passes in the opponent’s half. The Portuguese international’s best qualities are passing and progressive balls up the pitch, but he has failed to produce his best qualities on the pitch this season. Too often this season, Gomes has lost possession and made reckless challenges. 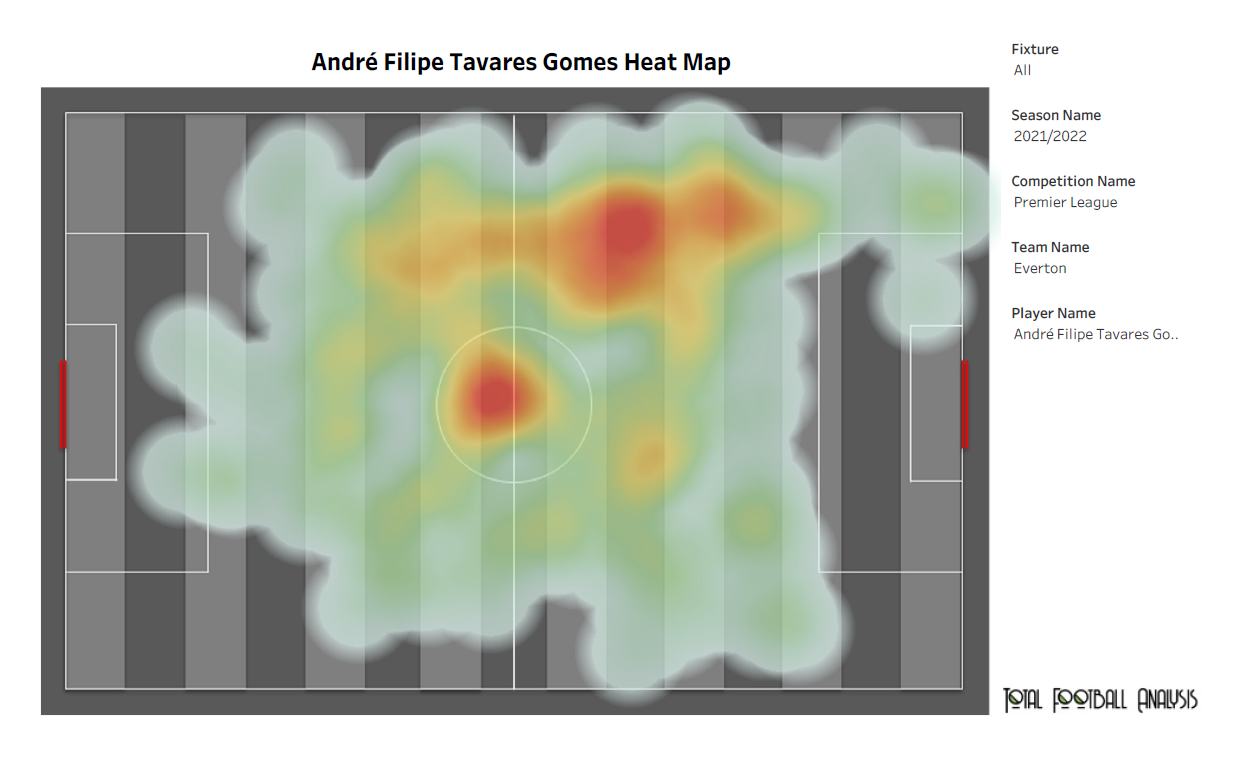 We can see Gomes’s area of activity in the above viz. He has mostly occupied the half-spaces in the opponent’s half. While the 28-year-old’s coverage of the pitch is decent, he has been unable to make impactful contributions on either end of the pitch. When needed to contribute to his defense, Gomes is unable to stop opposition players, becoming a liability at times. Although he is decent in his pressing, his ineffectiveness in preventing players from going past him has been a cause for concern.

Gomes has failed to measure up to the qualities that brought him to Goodison Park. His struggles with consistency and game time point towards an uncertain future for the Portuguese international at Everton.