Things have not gone according to the plan for the Toffees. Since taking charge of Everton, Lampard has overseen seven matches, winning three and losing four. In their recent match, the Toffees suffered one of their heaviest defeats of the season, a 5-0 thrashing at the hands of Spurs. Everton’s attempt at playing a high line was exposed time and again by Tottenham. The Toffees’ away form has been specifically disappointing in the recent matches. A lack of defensive tenacity, individual errors, and general ability to trouble the opposition defense has been a common theme of Everton’s away form.

As a result of their poor displays, Everton now find themselves battling for survival in the Premier League. Just a point above Burnley, in the 17th spot, Everton would need to pick up wins in their upcoming matches if they are to ensure survival in the league. Lampard has tried multiple different formations and is still to settle on a single shape. While Richarlison, Gordon, and Calvert-Lewin have seen plenty of game time in the attack, Andros Townsend has struggled to feature regularly under Lampard.

Many fans and pundits have expressed that Townsend is not getting the credit he deserves for the impact he has made since arriving at Goodison Park last summer. He is currently Everton’s highest scorer with seven goals, while he also has the joint-highest assists in all competition. Townsend offers a reliable option for Lampard in the attack, given his versatile nature, and could be influential in Everton’s bid to ensure survival.

Let’s take a look at some stats to gauge whether he should get more game time in upcoming matches. 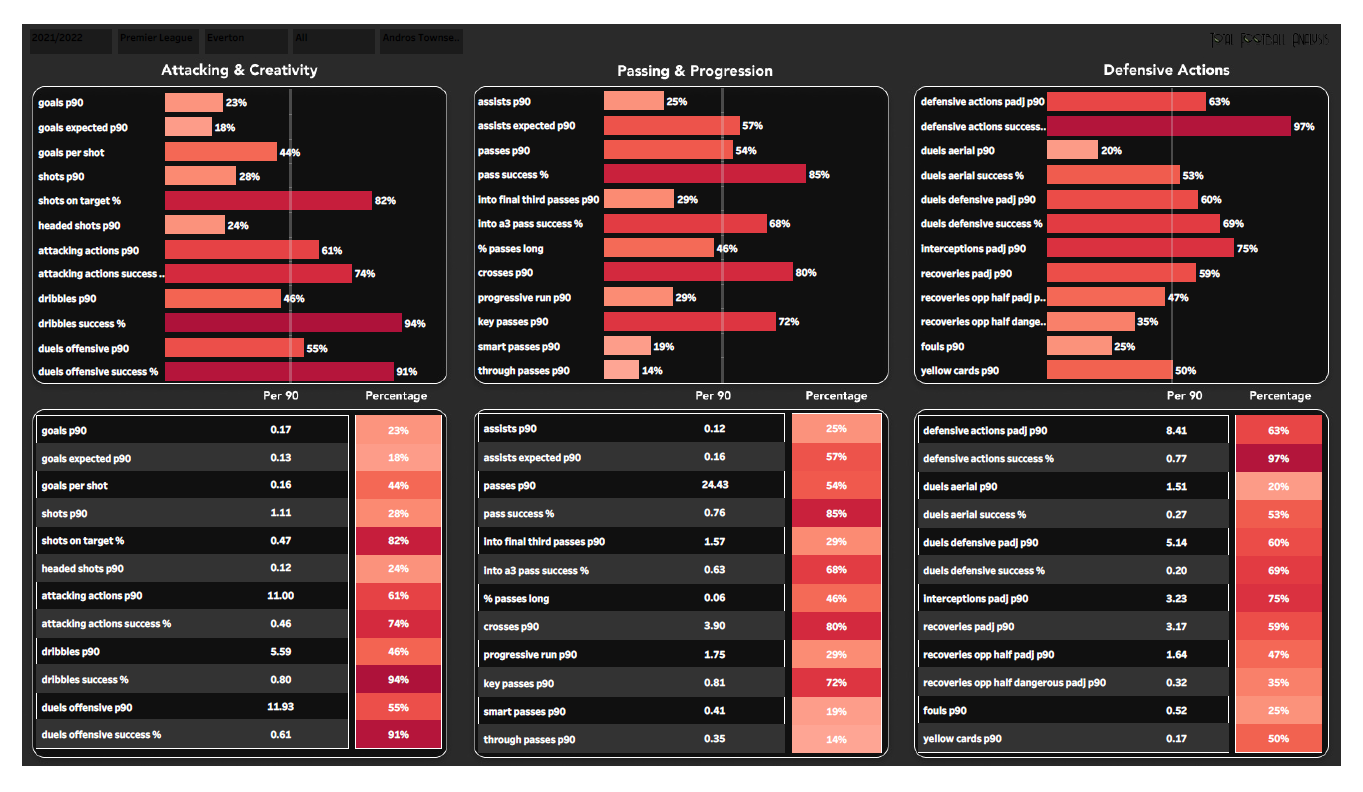 In the above viz., we can see Townsend’s overall stats in the league this season. In terms of the attack, his most notable stats are attacking actions success rate, dribbles success rate, and offensive duels success rate. The 30-year-old has fared above the league median in many other stats as well. Townsend’s playstyle is direct, and he utilizes his dynamic presence in the forward areas to break down the opposition defense. He is an adept dribbler, who can spread the defense, creating space for his attackers. Townsend has maintained a decent level of performance under Lampard in the few opportunities that he has gotten. He has a goal contribution of two in four appearances under the new manager. 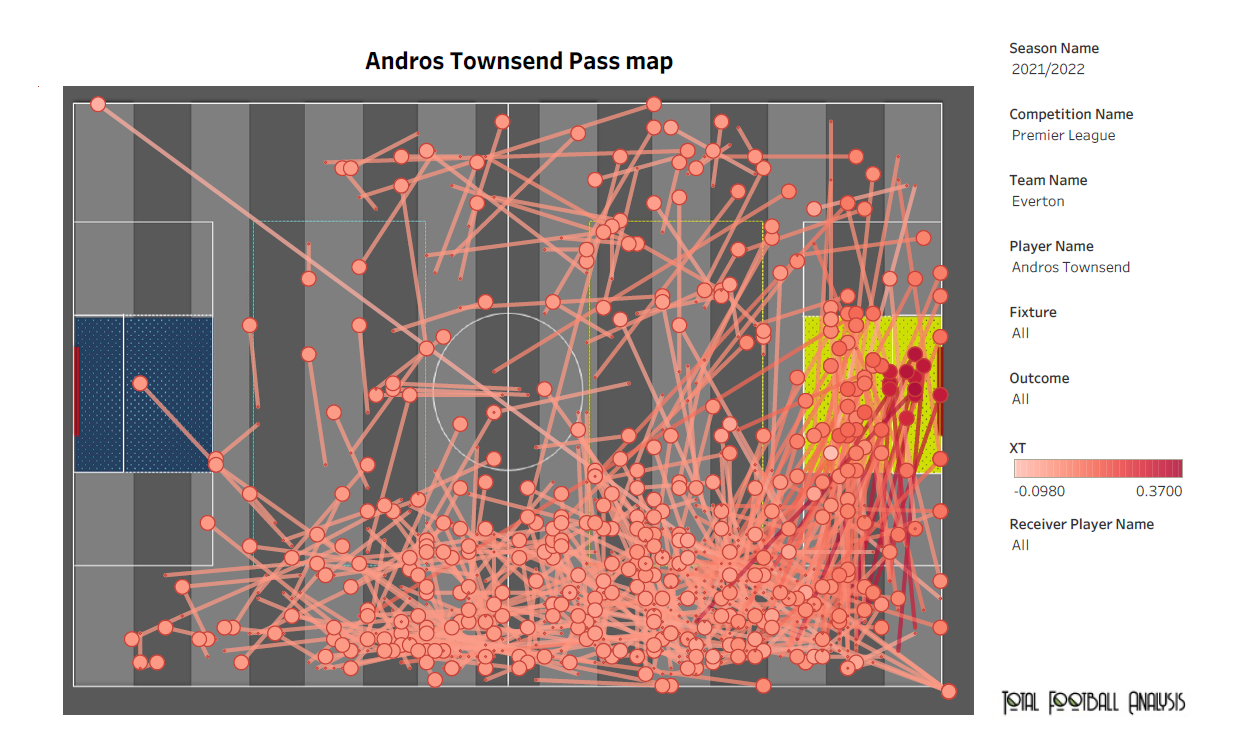 The above viz. displays the areas of the pitch where Townsend has delivered his passes. We can see his multiple threatening passes into the opposition box from the right wing. Everton are in desperate need of creativity from the midfield, and Townsend could be one of the options given his knack for finding the spaces to attack. Against Boreham Wood in the FA Cup, Townsend was impressive, completing all of his dribbles, winning most of the duels, and contributing an assist. 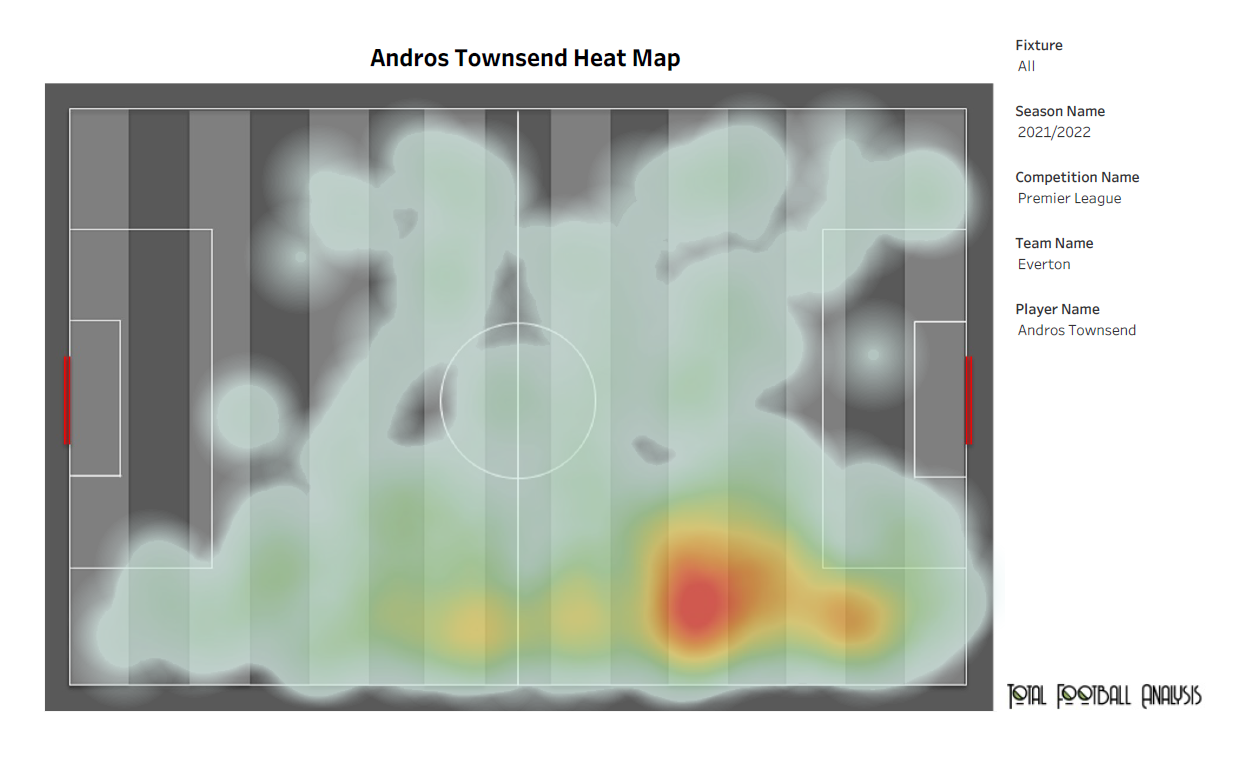 The 30-year-old provides versatility to play across multiple roles in the forward line and in attacking midfield positions. He can be used as a traditional winger, pinging crosses into the penalty area and providing width, or as an inverted winger, attacking from the right flank. In the above viz., we can see his movement and activity in the opponent’s half. This season, Townsend has been deployed as a right-winger, second striker, and attacking midfielder. His highest contributions have been made as a right-winger.

Townsend’s experience in the league could be an asset for Frank Lampard’s men in the upcoming matches. They are in desperate need of goals and creativity, and should very well rely on their highest scorer this season.