Just days after announcing the loan move for Aston Villa for winger Anwar El Ghazi, Everton declared that they have parted ways with manager Rafa Benitez. Following a 1-2 defeat against Norwich City, Everton hierarchy decided to sack the Spanish manager after just six-and-a-half months in charge. The Toffees have been struggling to perform throughout the season and have won just once since September. Their poor run of form has seen them drop to 15th position in the Premier League with five wins, four draws, and 10 losses in 19 matches. As a result, they are just six points above the relegation zone.

El Ghazi’s signing has been questioned by many fans as Everton already have a host of players capable as a winger. Before his sacking, Benitez was asked about El Ghazi’s signing. The Spaniard replied that with the situation with COVID, injuries, and Iwobi away on international duty, it was an opportunity too good to miss.

The Dutch winger has made only nine appearances, mostly as a substitute, and has seemed to drop out of favor at Villa. New manager Steven Gerrard has opted to play Danny Ings up top with Watkins and Buendia on either flank. However, last season the former Ajax academy product scored 10 goals in 28 appearances for Aston Villa.

Let’s take a look at some stats to gauge whether El Ghazi can provide aid to Everton’s creativity issues. 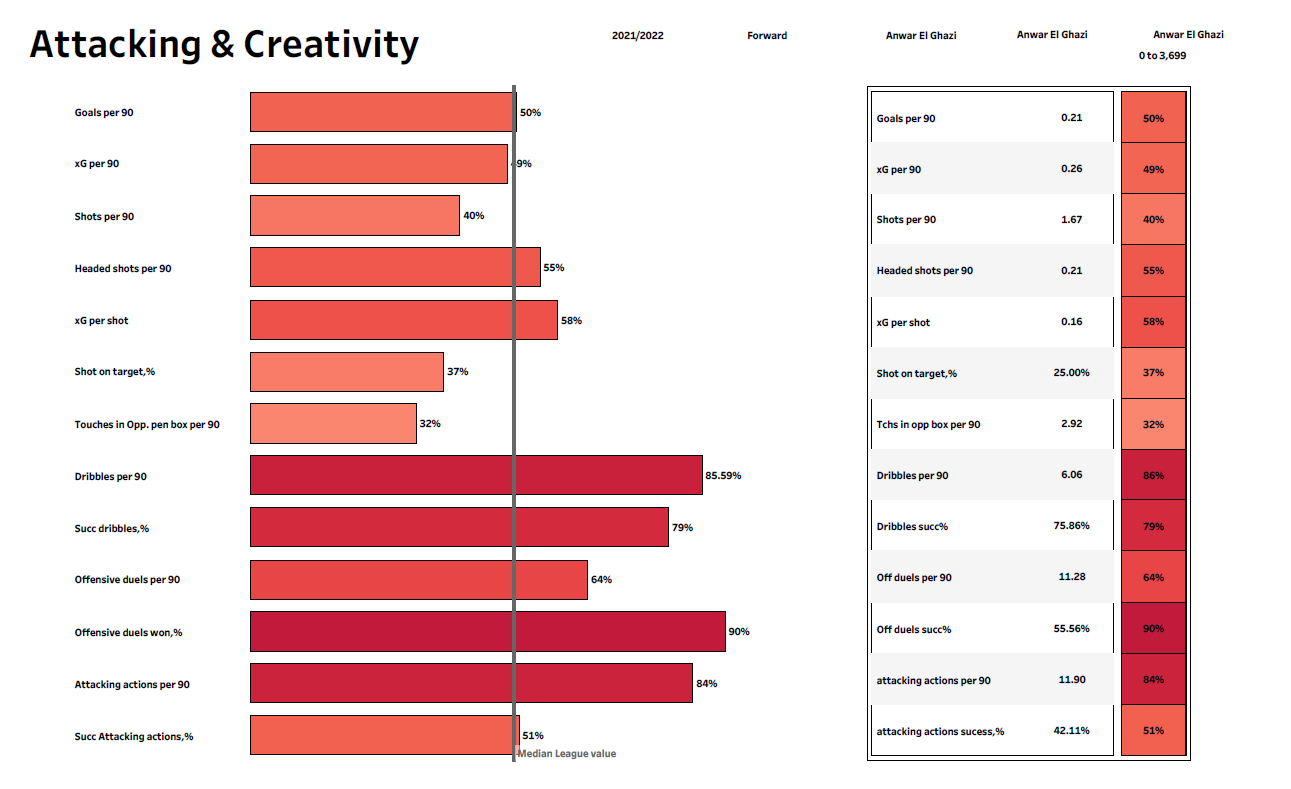 The majority of El Ghazi’s attacking and creativity stats surpass the league median value, despite being limited to mostly substitute appearances. His most notable stats are average dribbles per match, successful offensive duels, and average attacking actions per match. El Ghazi is a versatile winger who can be deployed on either flank. He is capable of making threatening deliveries in the opposition’s box with either foot. El Ghazi is strong in the build-up phases of the game, a quality he demonstrated during his time at Aston Villa. He often looks to bypass the opposition defender with quick one-two passes. 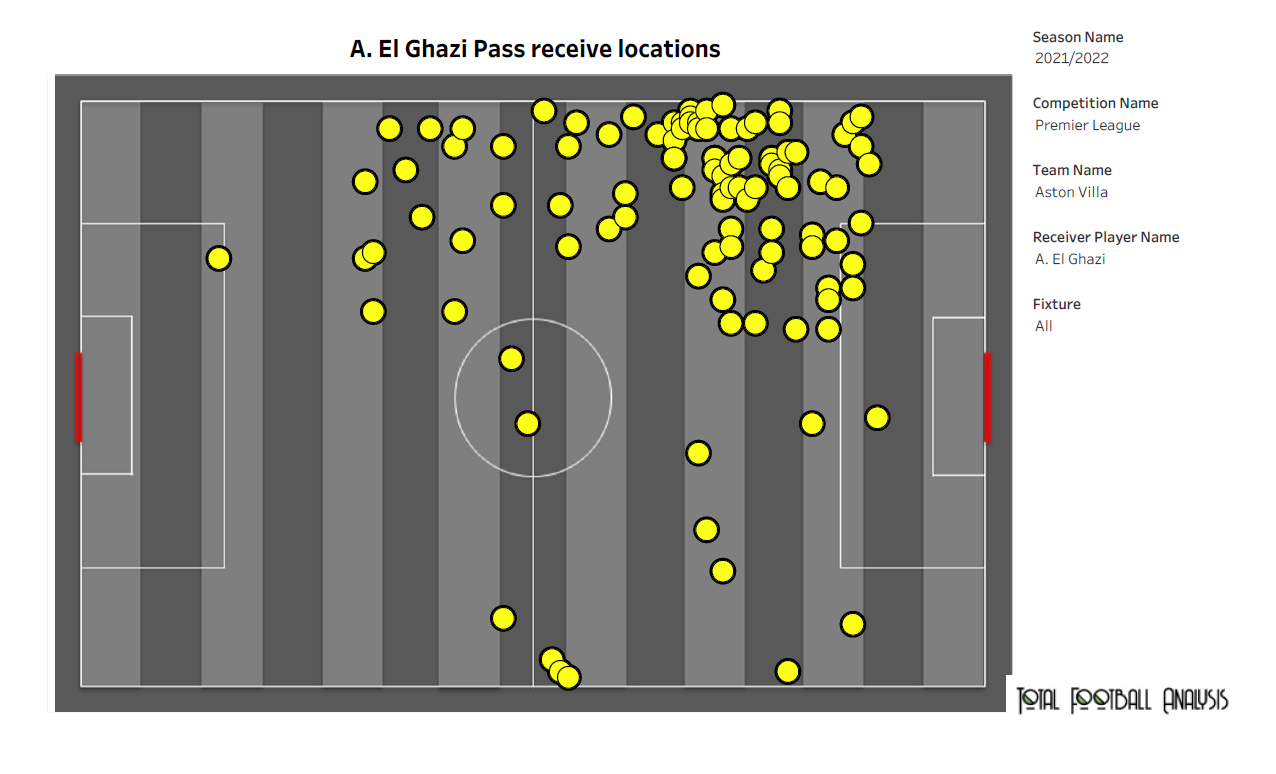 El Ghazi’s ‘pass receive’ locations display the areas of the pitch where he drops to receive passes. We can see in the above map that El Ghazi received most of his passes in the half-spaces and the wide areas near the touchline. El Ghazi is particularly efficient in creating space for his full-back. The winger is constantly drifting between the central zones and wide areas and is often able to trick the defender into following him. Everton have been lacking in creativity this season from wide areas, and El Ghazi can provide the attacking threat by utilizing his dribbling ability and running with the ball. In the above map, we can also see that El Ghazi often drifts into his half to receive passes and aids his side in the build-up phases. 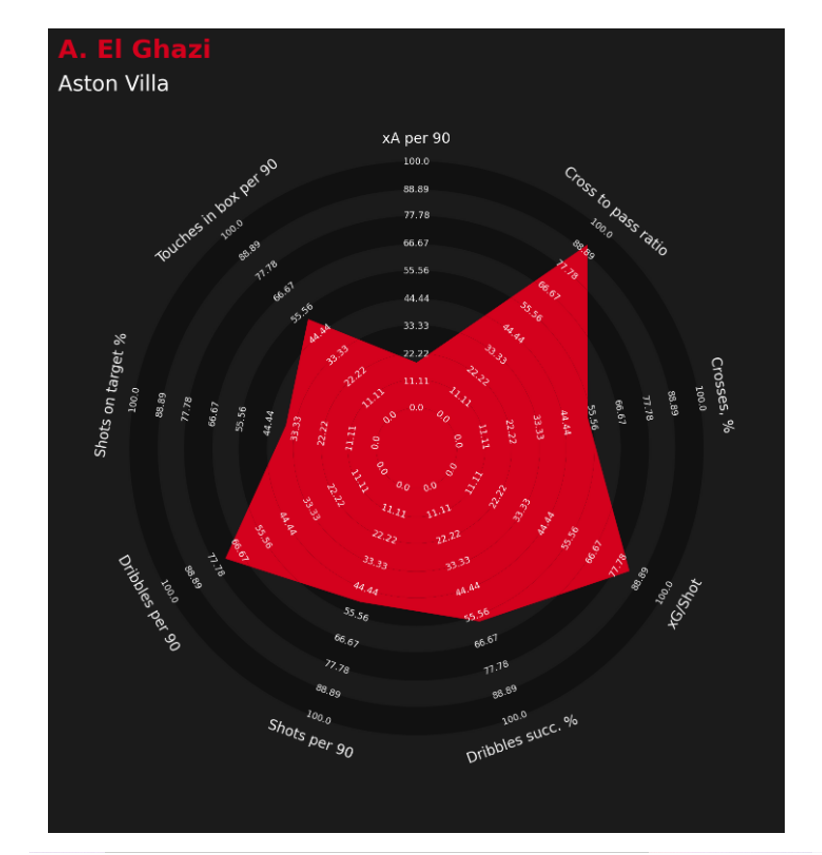 Another one of El Ghazi’s strengths is his shooting ability, specifically from distance. During his time at Ajax, El Ghazi established himself as capable of scoring long-distance goals. This could provide an added advantage to Everton, as other than Andros Townsend, they lack capable shooters from outside the box. In the above viz., we can see that he ranks highly in terms of xG/shot. In addition, El Ghazi excels in crossing the ball in threatening areas, as indicated by his high cross-to-pass ratio. 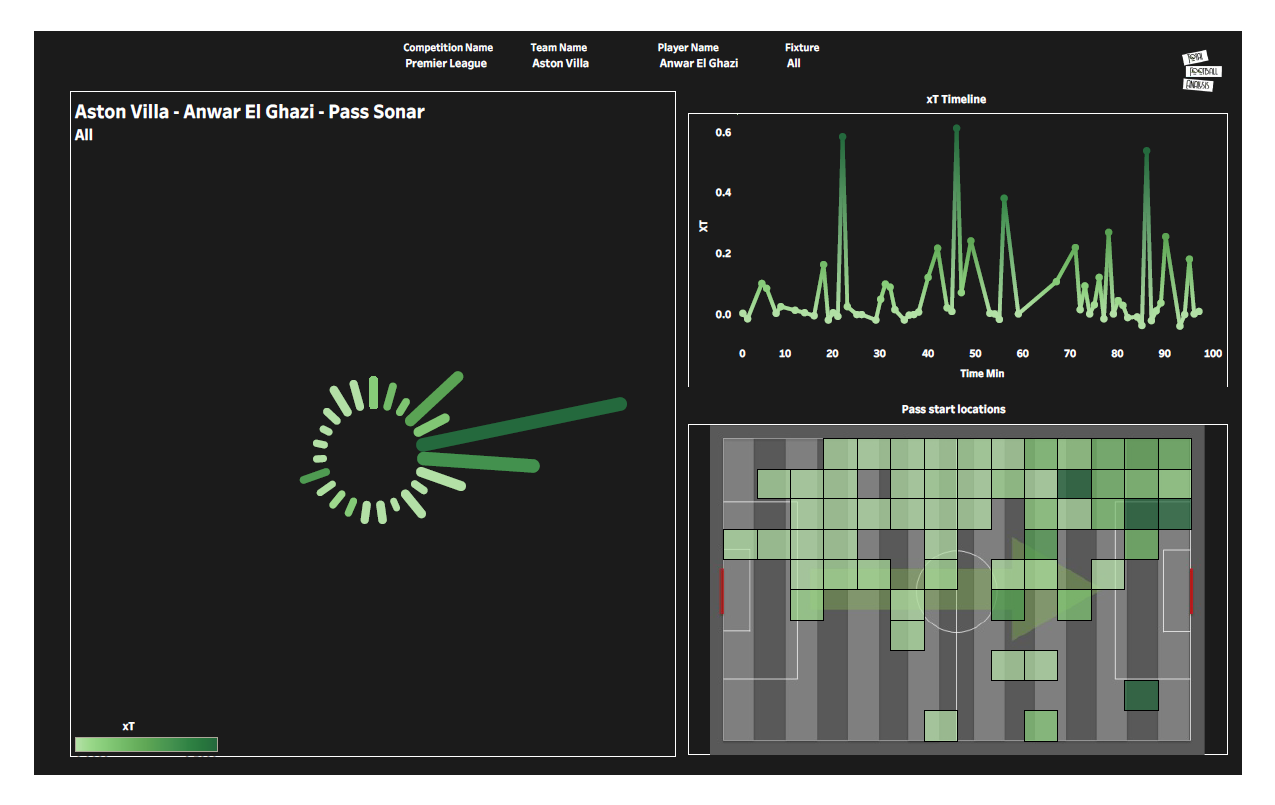 Pass Sonar outlines the direction of pass that a player or a team tends to make and indicates a player’s influence on the movement of the ball. In addition, it shows the frequency distribution of different passing angles for an individual player, as well as the typical length of pass attempts. Despite not registering any assist last season and just one this season, El Ghazi has demonstrated his ability to play threatening passes near the opposition’s box. The above viz. shows the location of his threatening passes on the left wing. El Ghazi might need to improve his lack of assists, if he is to cement his place in Everton’s starting XI.

Although the signing of El Ghazi has puzzled many fans, Everton’s next manager would need to decide on how to utilize El Ghazi’s creative attributes effectively. His stats indicate that he can provide an extra layer of attacking threat to Everton’s offensive play.