Everton suffered yet another defeat over the weekend, falling 0-1 to Wolves in the Premier League. The defeat means that Everton are now on the cusp of the relegation zone, level on points with 18th placed Watford. After their 0-5 thrashing at the hands of Tottenham, the match against Wolves was crucial for the Toffees. However, Connor Coady’s goal handed Frank Lampard his second successive home defeat in the league.

Whether or not they stay in the Premier League, the upcoming summer would likely see Everton dive into the transfer market. One of the players that Everton have been linked with is Armando Broja. The 20-year-old, who is on loan at Southampton, is a product of Chelsea’s youth academy. Broja is having an impressive season with the Saints, scoring six times in 25 league appearances.

Lampard already displayed his impressive work with young players during his time as Chelsea manager. The likes of Mason Mount, Tammy Abraham, Fikayo Tomori, and Reece James have benefited under Lampard’s tutelage. However, the Everton manager must first ensure that his side stays in the Premier League, as any possible deal could be impacted by where Everton find themselves next season.

Let’s take a look at some stats to gauge whether Broja would be a good fit for Everton. 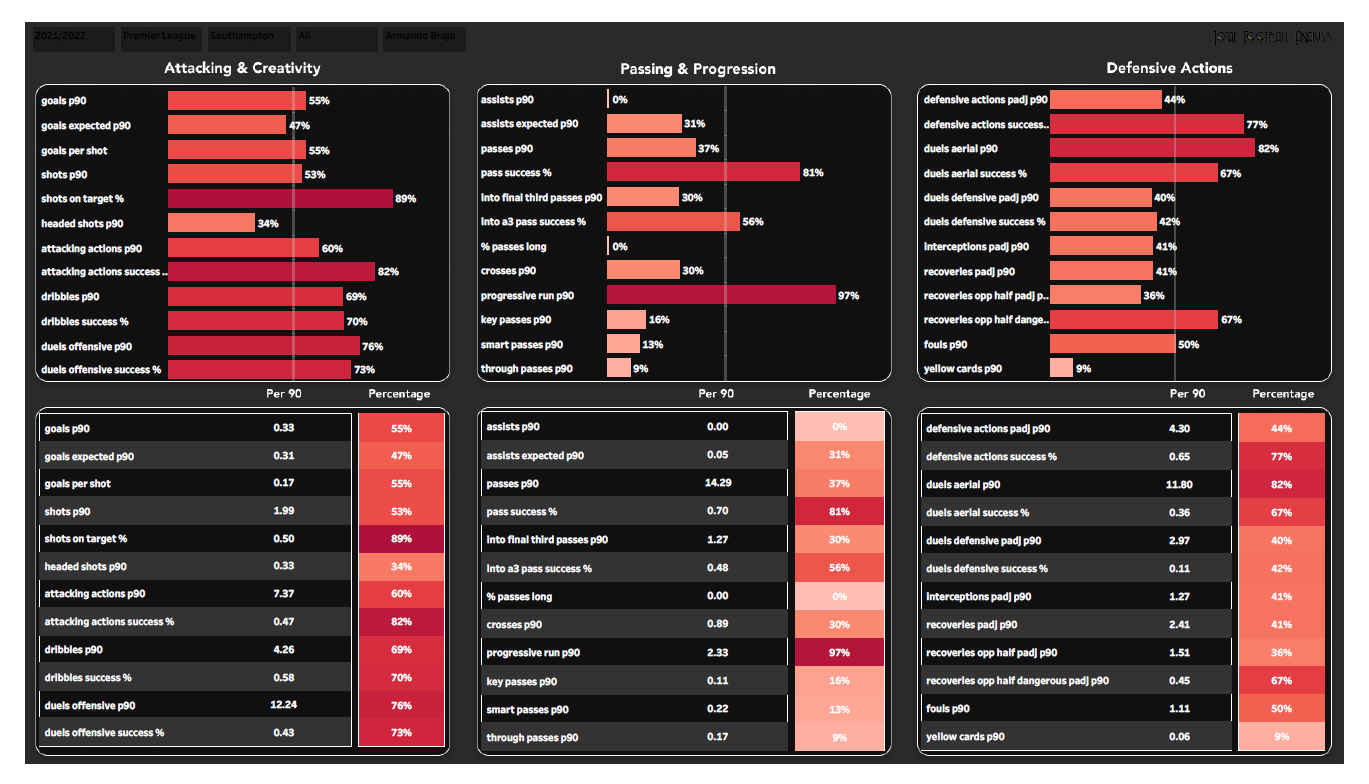 In the above viz, we can see Broja’s overall stats in the league. Broja has decent stats in terms of attacking & creativity. His most notable stats are shot accuracy, attacking actions success rate, and offensive duels per 90. Broja is an effective target man with a decent build who is assured in possession. He uses fewer touches of the ball to make an effective play. His build allows him to hold the ball under pressure from the opposition defenders. In addition, he possesses strong dribbling ability, which he utilizes with great effect to create better shooting angles. 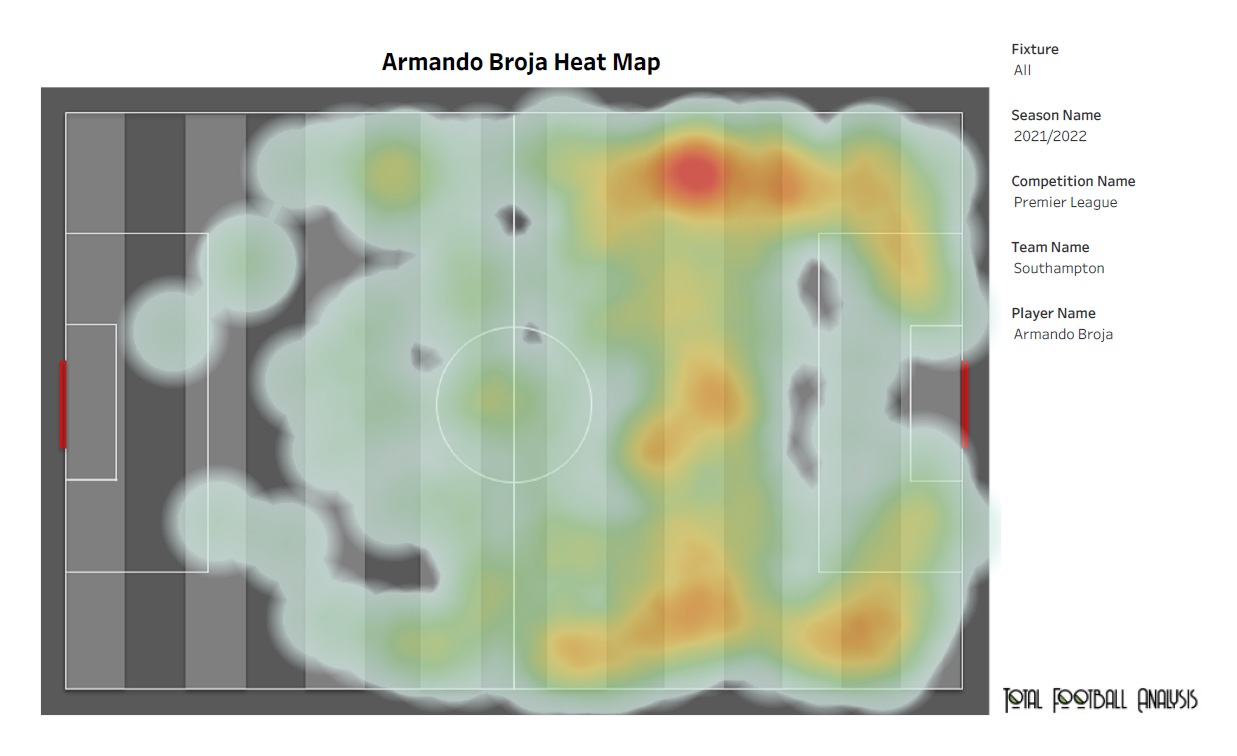 Broja can operate as a centre-forward or as a wide attacking player. His versatility in both roles would make him a suitable prospect at Everton, as he could replace Calvet-Lewin or Richarlison in the attack. He is adept at dropping deep and aids his side during the build-up play. He possesses great ball-playing ability and positional awareness. He can play off the last man, draw defenders wide and drop in and link up with midfielders. In the above viz, we can see the areas of the pitch where he is most active. The Albanian international has been most active in the half-spaces on the left wing. In Hassenhutl’s 4-4-2 system, Broja is usually deployed on the left side of the front two. 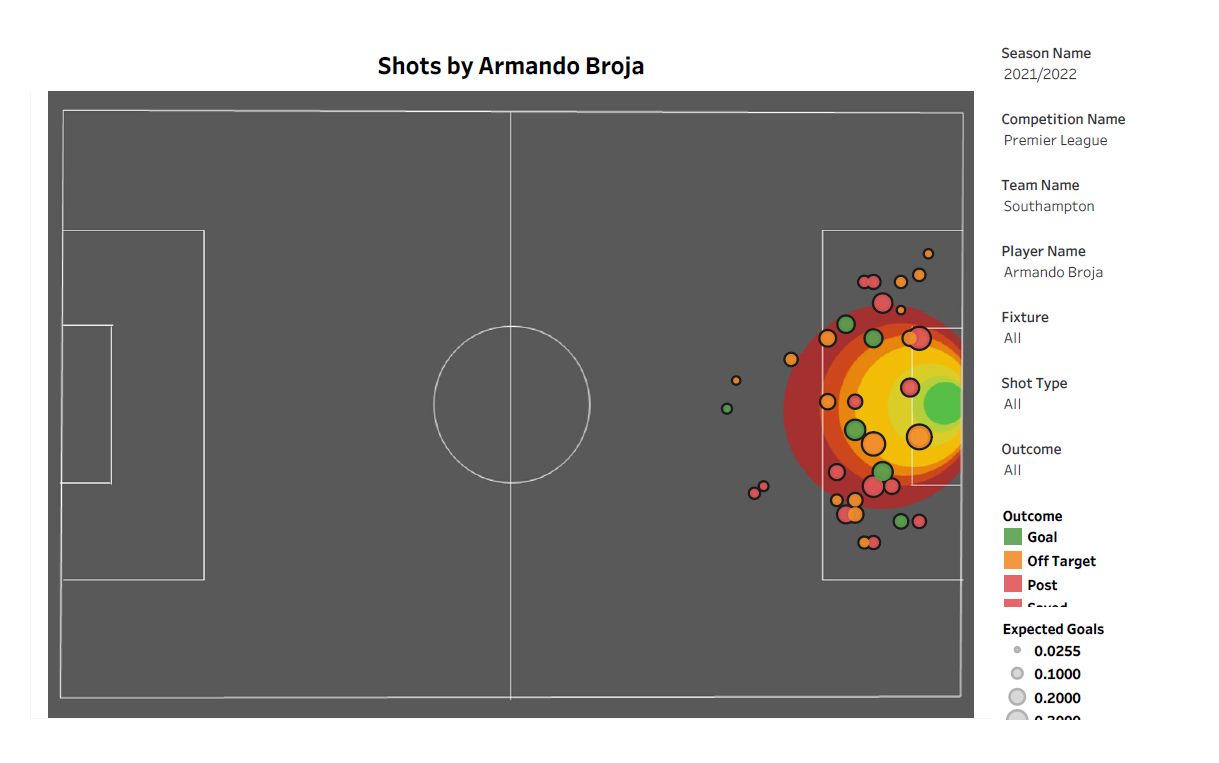 In the above viz, we can see the locations on the pitch from where Broja has taken his shots. Most of his shots have been taken from inside the opposition box. Broja often makes late runs and can receive threatening passes near the box. He is a capable finisher as well as a creator. Broja can finish with both feet and is an aerial threat.

Broja has attracted interest from a host of clubs, including Arsenal. His loan spell at Southampton has proven to be a fruitful one. The Albanian international is an ideal candidate to provide depth to Everton’s front line.