With the search for a new manager still in full swing, Everton have been linked with many players despite completing three new signings since the January transfer window opened. The Toffees have already bolstered their full-back area with the addition of Vitaly Mykolenko and Nathan Patterson, while they have also strengthened their attacking options with the signing of Anwar El-Ghazi.

Reports this month have claimed that Everton could move for Tottenham midfielder Dele Alli. The 25-year-old midfielder has struggled to get into the starting line-up of the Lilywhites for the past couple of seasons. Despite Spurs’ managerial changes, the midfielder has often found himself on the fringes of the squad, a situation which persists under current manager Antonio Conte. While a permanent deal this month is looking unlikely, Everton could sign Alli on a loan deal.

A move to Everton could breathe new life into Alli’s career, while also providing Everton with the attacking reinforcements in the midfield. The Toffees are currently lacking a number ten option. Alli, who is capable of featuring as a number ten or as a wide forward, could act as a link between Everton’s midfield and attack. The midfielder’s lack of playing time is one concern that the Everton hierarchy must consider before deciding to make the move, as Alli has made only 25 appearances in the Premier League in the past two seasons combined.

Let’s take a look at the midfielder’s stats to gauge if he could possibly become a good signing for the Toffees. 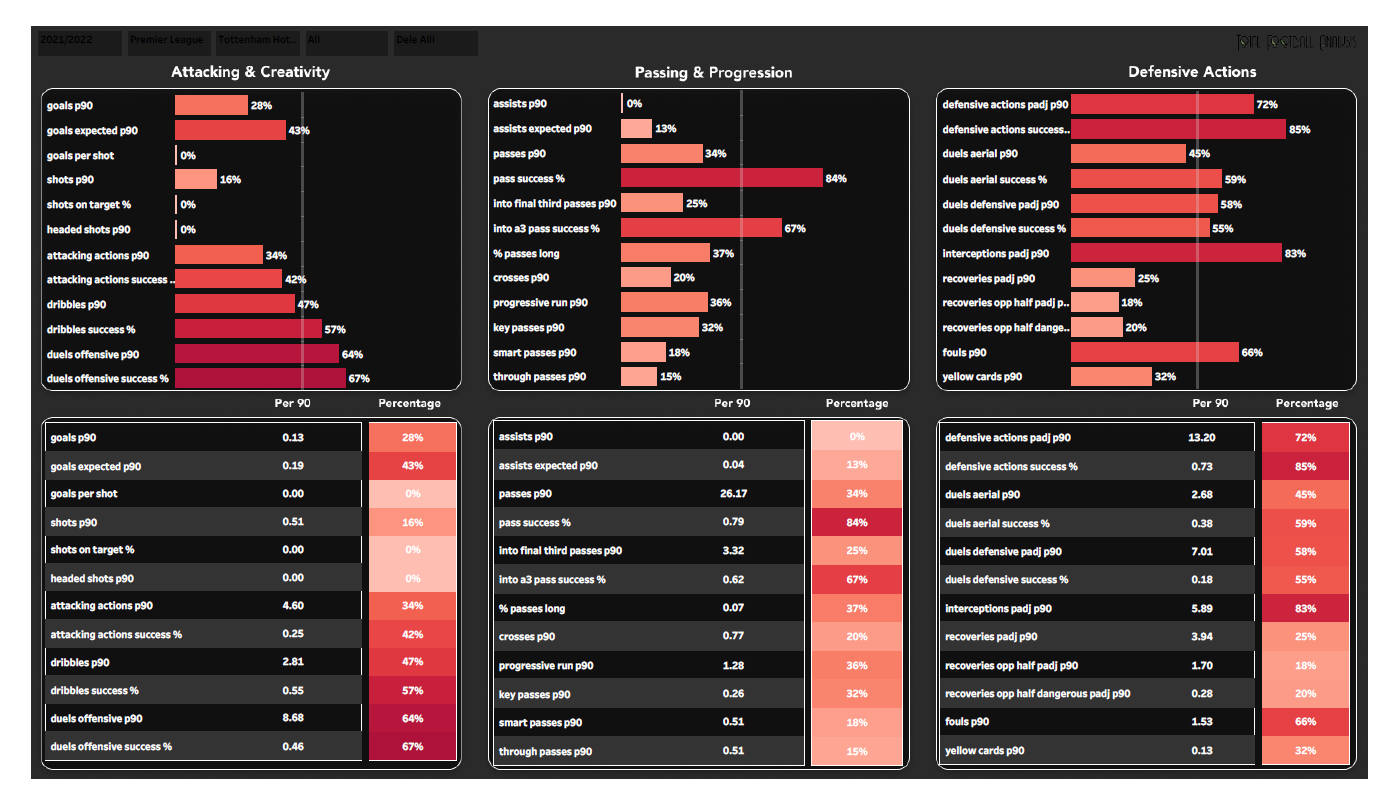 In the above viz., we can see Alli’s attacking & creativity, passing & progression, and defensive stats. At an initial glance, his stats look unimpressive as he has had limited game time under his belt. Nevertheless, the midfielder has struggled with consistency which is further highlighted by his inability to feature regularly under multiple managers. However, there are some metrics in the above stats where the midfielder has displayed his ability, for example – dribbling success rate, average offensive duels, and offensive duel success rate. In addition, Alli’s pass completion rate of 84% is also impressive. Interestingly, the attacking midfielder has fared much better in terms of his defensive output, as highlighted by the above stats. Alli excels at dribbling, and possesses the speed to run past the opposition defenders. He has also displayed the ability to finish from outside the box and remains a threat near the edge of the box. 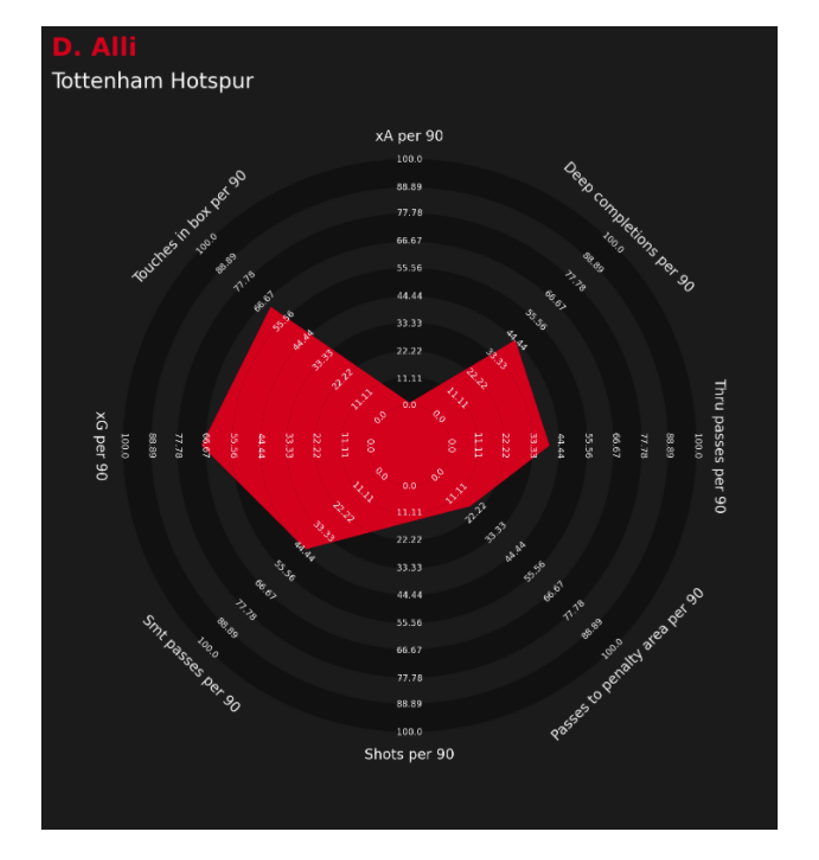 The above viz. further highlights Alli’s attacking threat. He has fared well in terms of xG per 90 and touches in the box per 90. However, there are multiple other areas where Alli would need to improve if he is to provide a meaningful contribution to Everton’s attack. 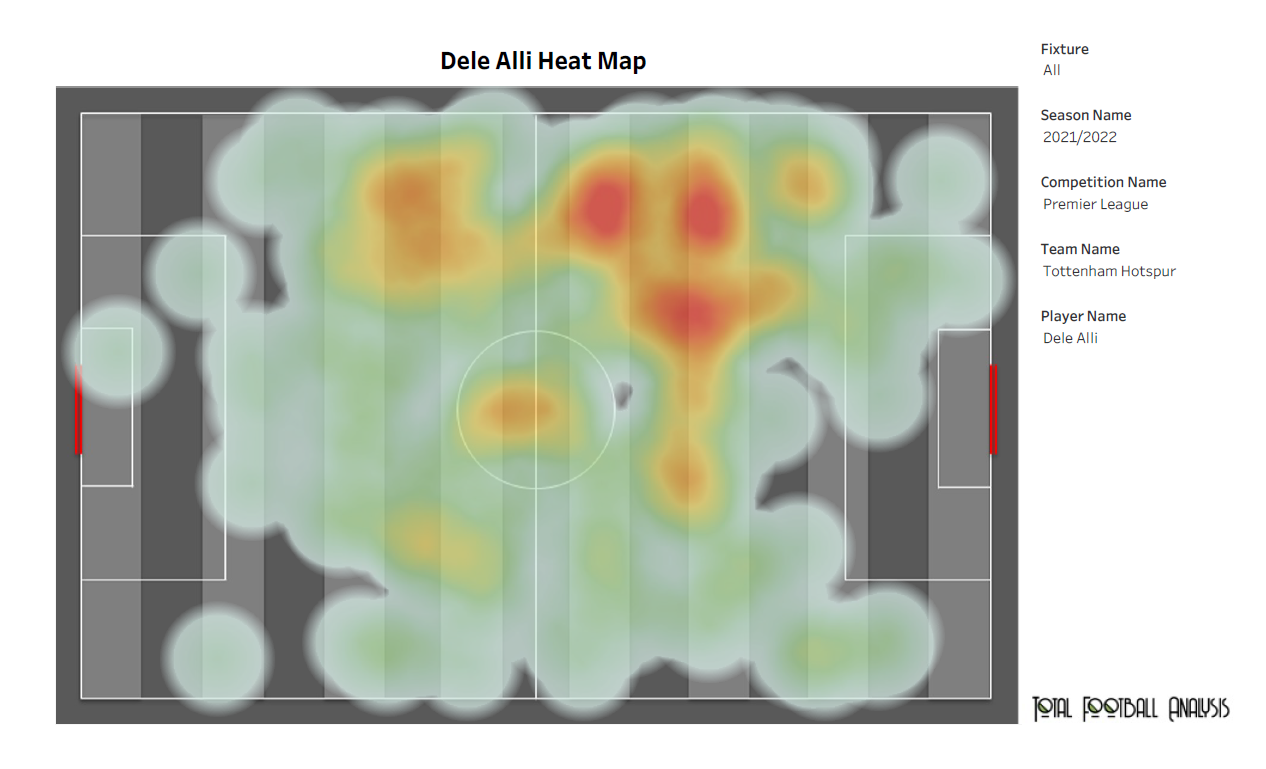 Despite making limited appearances this season, Alli has displayed an impressive work rate, as highlighted in his heat map. Furthermore, he can travel with the ball and can get into threatening areas. Alli can play as a wide forward, but a number ten role at Everton would suit Everton the most as he can link up the attack with the midfield. His late runs into the penalty area also add to his attacking threat. Alli’s technical ability allows him to pick the ball comfortably from his defenders as well.

Alli would need to improve on his consistency if he is to get a starting role at Everton. His stats indicate that he could possibly become a good signing for the Toffees.