Things have not gone well for Everton’s deadline-day signing Dele Alli. Since making the move to Goodison Park, Alli has struggled for game time. The 25-year-old has made just six appearances and is yet to start a single match. Many reports are now claiming that the Everton hierarchy is considering letting him leave in the summer. Alli’s form and performances have declined in recent years. Since the departure of Mauricio Pochettino, the midfielder had struggled to get a place in the starting XI under multiple managers at Tottenham.

Alli’s move to Everton was seen by many as a chance for a fresh start, which could help him regain his form and confidence. However, the 25-year-old has struggled to make any sort of impact at Goodison Park. Given the Toffees’ recent form, which has seen them drop crucial points and placed them in a relegation battle, it is unlikely that the midfielder is going to be afforded many chances in the upcoming matches. Following the international break, Everton are set to undergo a tough round of fixtures, the one which will see them take on some of the top teams in the Premier League, and with Alli’s current form, it is unlikely that the 25-year-old would be gambled upon.

The midfielder’s confidence has seemed to drop massively in the recent seasons, and he has failed to impress multiple managers. During the start of the season at Spurs, Nuno Espirito Santo tried to repurpose Alli into a number eight, however, it did not work. Antonio Conte was similarly left unimpressed by the 25-year-old. Under Lampard, the Toffees have won just one game in which Alli was involved, with no goal contribution to his name.

Let’s take a look at some stats to gauge what has gone wrong for the midfielder. 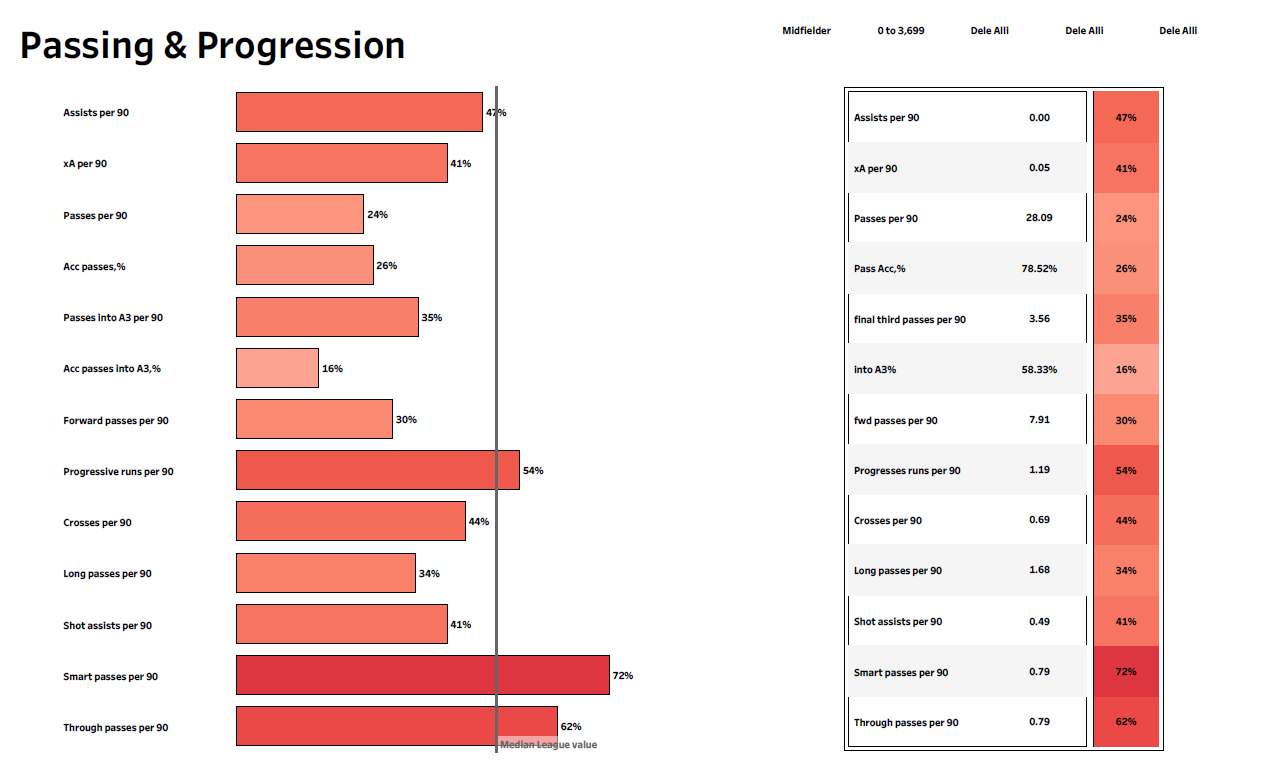 In the above viz, we can see Alli’s passing & progression stats. The majority of his stats are underwhelming and are below the league median. While he has gotten very few chances, Alli has struggled to make an impact on Everton’s attacking play, and his performances have lacked sharpness, energy, or creativity. Often, he has lost possession, and his recoveries have fallen short as well. 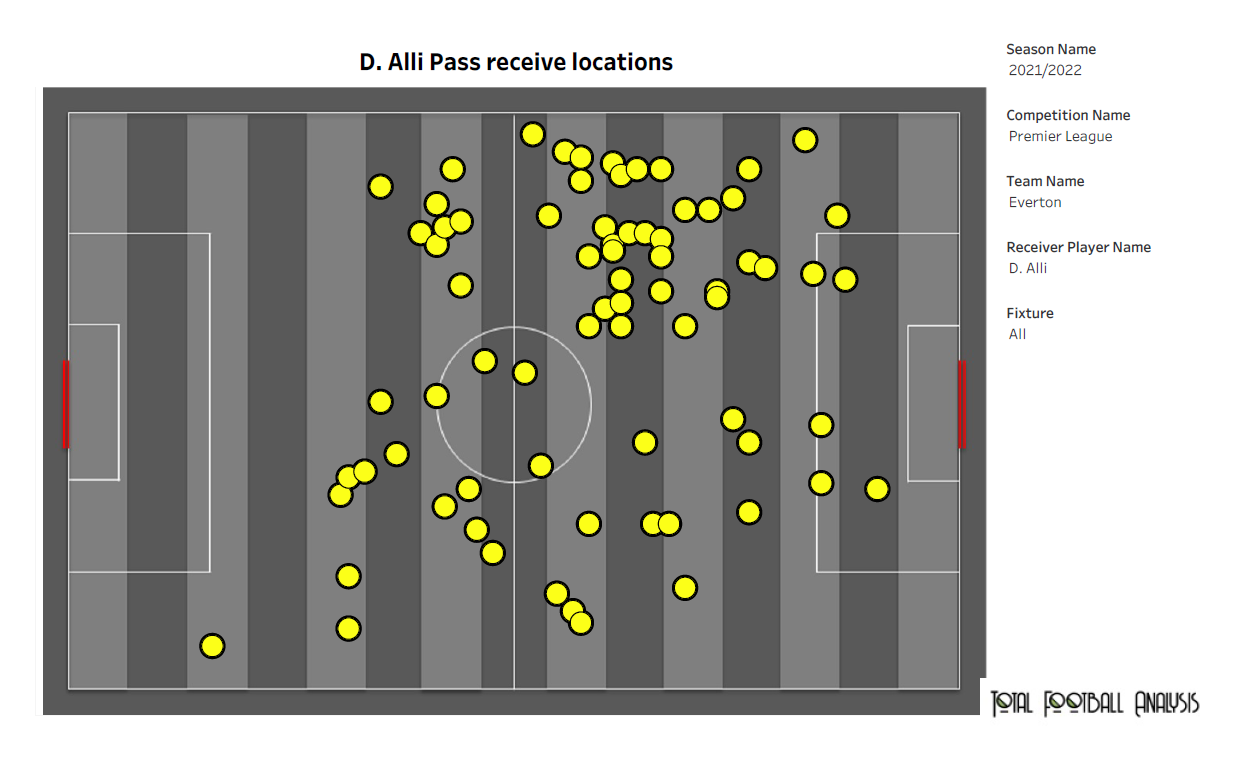 The above viz. displays the areas of the pitch where Alli has dropped to receive his passes. We can see that the 25-year-old has been mobile and dropped in his half regularly, which indicates that the forward is working hard out of possession. However, the lack of impact and end product in his game has drawn him a lot of criticism from fans and pundits alike. Alli has also struggled to display the speed and dribbling ability that made him a huge threat at Spurs. 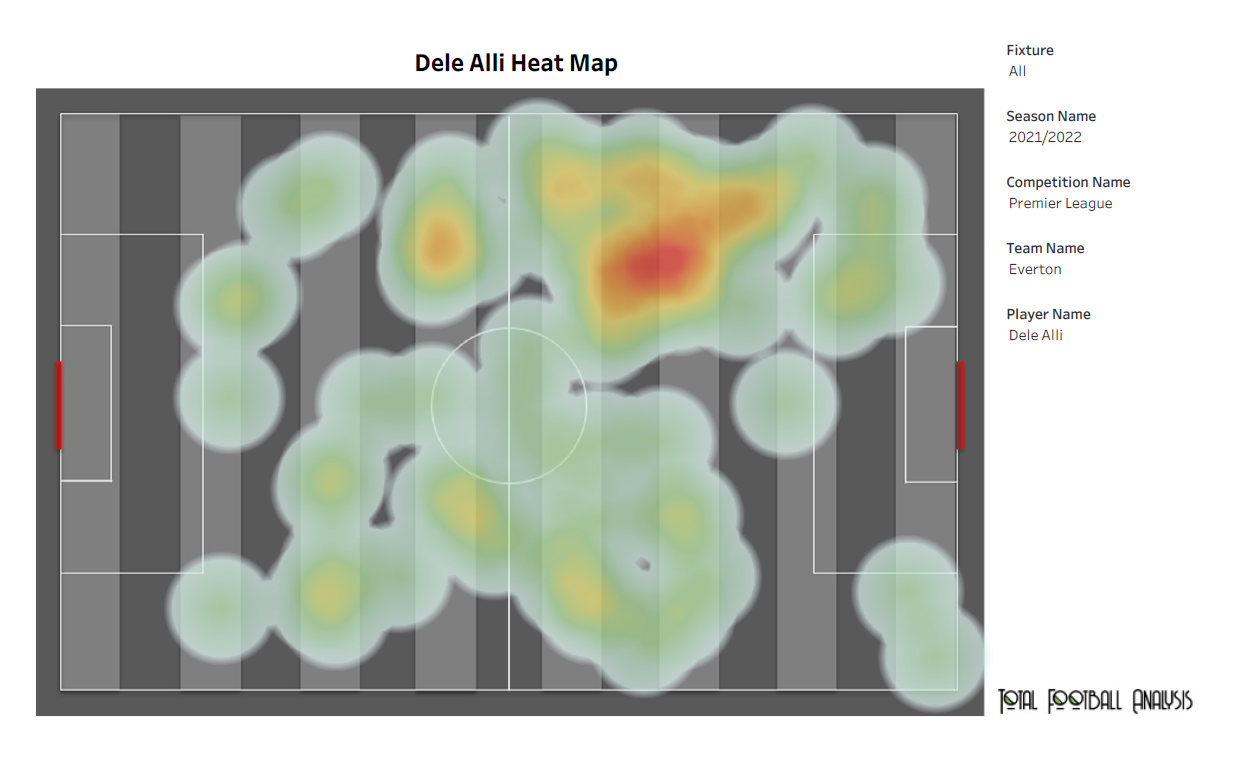 We can see the areas of the pitch where Alli has been most active in the above viz. At Everton, Alli has been mostly deployed as an attacking midfielder. In a few of his substitute appearances, the midfielder has displayed slight sparks in the middle of the pitch, helping Everton with build-up, but that hasn’t been enough as Everton have overall been run over in the midfield. We can see that Alli has mostly engaged in the half-spaces on the left wing.

While there have been a few sparks in his substitute appearances for the Toffees, a lack of consistency has been a major theme of Alli’s performances. With Everton currently engaged in a relegation scrap, it is looking unlikely that Alli would be afforded many chances to make an impact unless there is a drastic change in his form.