In five matches under Frank Lampard, Everton have been inconsistent. While at home turf, they look energetic and dominant, but they face trouble replicating that same energy and dominance in away matches. However, since Lampard’s arrival, the recent 0-1 defeat against Manchester City was the first time that the Toffees failed to capitalize on the electric Goodison Park atmosphere. Although the defeat was narrow, Everton fans would feel hard done by the decision to not award their side a penalty, as Manchester City midfielder, Rodri, appeared to have handled the ball in his area.

The recent defeat proved to be a grim reminder for the Toffees – who have now lost three out of four games in the Premier League – that they need something more if they are to hope for a mid-table finish, a scenario that’s looking bleak at the moment. One of the players who can provide the Toffees with the edge and whose progress under Lampard has been halted due to injury, is the 25-year-old winger, Demarai Gray.

Since joining the Toffees from Bayer Leverkusen in the summer, Gray has been Everton’s most consistent performer this season. He was influential under Rafa Benitez’s troubled reign as Everton’s manager and established himself as an impressive young talent. After missing out on two league games against Leeds and Southampton, Gray made his comeback from injury as a late second-half substitute in the defeat against Manchester City. However, his cameo appearance proved insufficient to save the Toffees from defeat.

Despite Everton’s inconsistent form, Gray’s return could be massive for Lampard as he looks to elevate the Toffees up the league table. However, the former Chelsea manager’s first task would be finding a suitable place for Gray in his starting XI.

Let’s take a look at some stats to gauge his ideal position in Lampard’s starting XI. 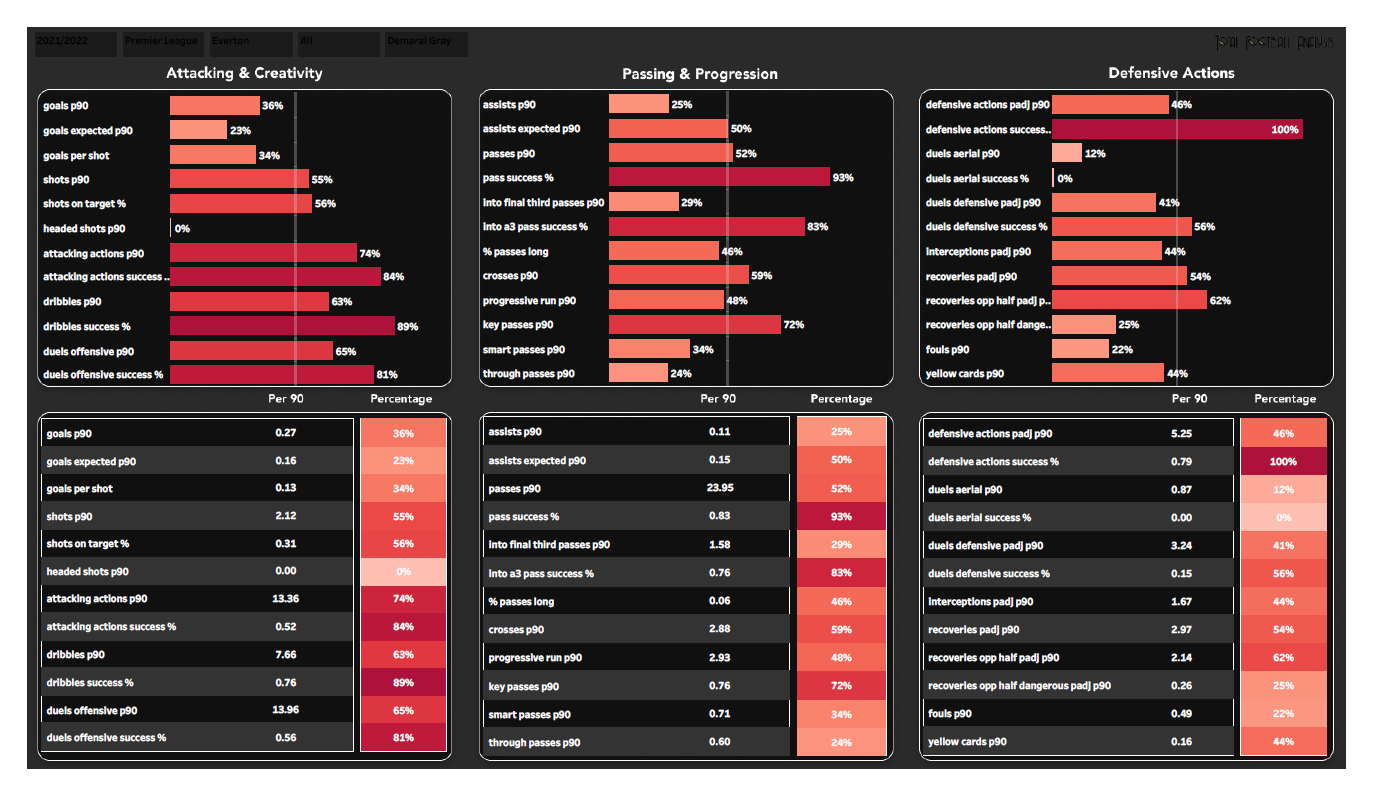 In the above viz., we can see Gray’s overall stats in the Premier League. In terms of attacking & creativity, Gray has fared well, with most of his stats surpassing the league median. His most notable attacking stats are successful attacking actions, successful dribbles, and successful offensive duels. The 25-year-old has been above average in terms of the majority of passing & progression stats as well. His ‘pass success rate’ and ‘attacking third pass success rate’ are his most notable passing & progression stats. So far, he is Everton’s second-highest goal-scorer with six goals in all competitions and has also provided three assists. 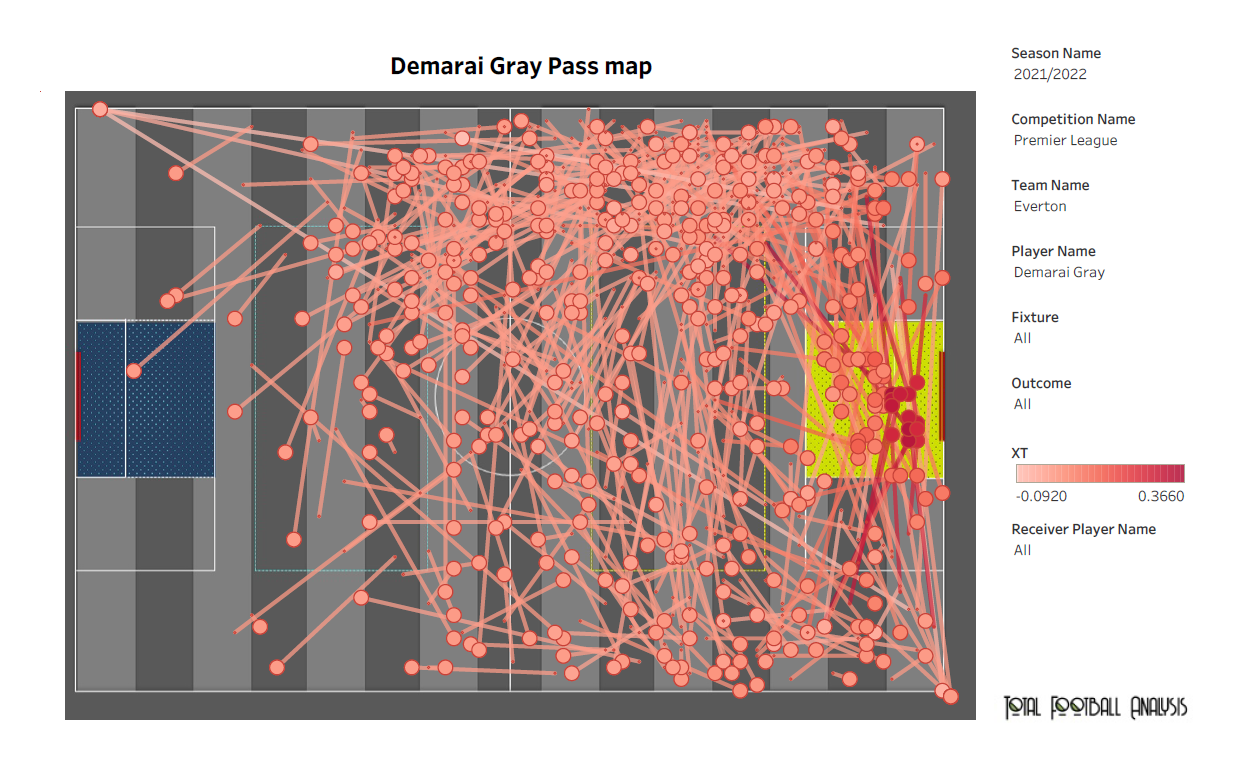 Gray is known for his dribbling ability and is capable of getting past multiple players. He is light on his feet and possesses impressive balance. Gray’s style of running is direct and he either tries to pass the ball into the final third or make the run himself. The above ‘pass map’ highlights the wide array of passes that Gray has delivered all over the pitch. We can see that he has delivered passes carrying high expected threats into the opposition’s box from both left and right wings. The 25-year-old’s most impressive performances this season came as a floating number 10 under Benitez, where he had the freedom to exploit the spaces near the attacking areas. 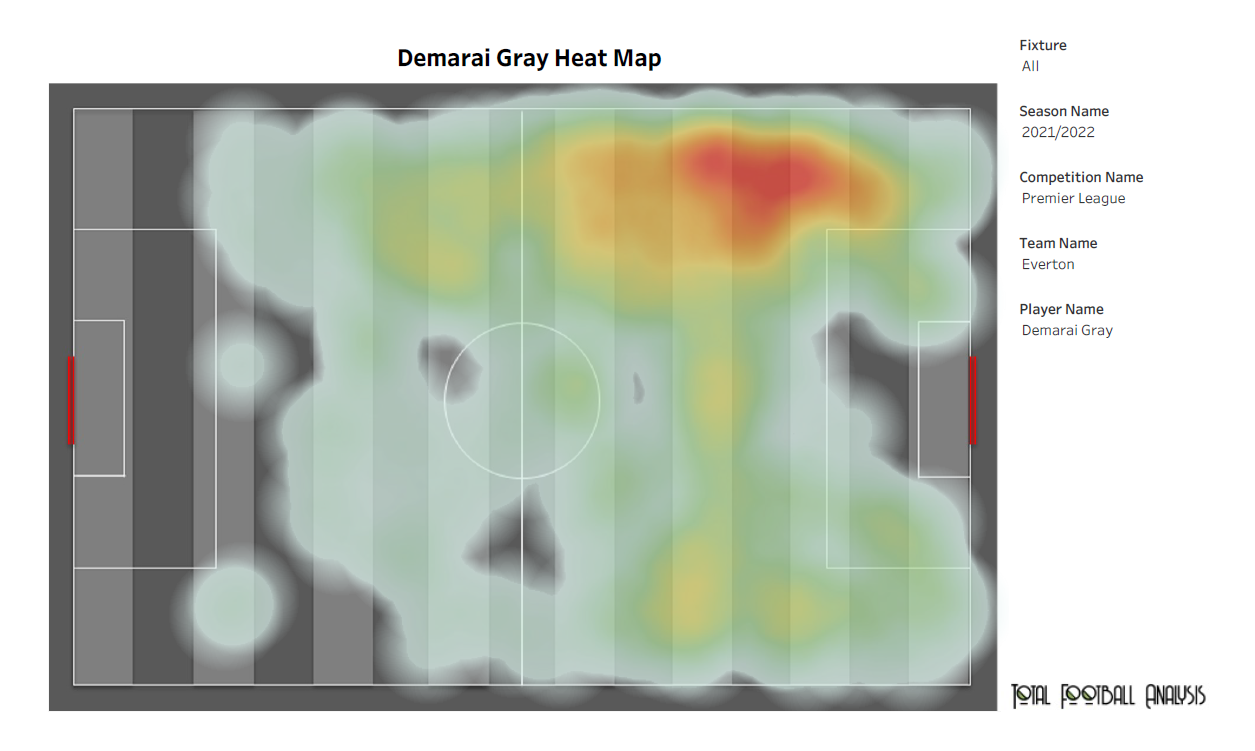 In the above viz., we can see the areas of the pitch where Gray has been most active. He has been mostly found on the wide left and in the half-spaces near the opposition’s box. During the start of the season, Gray was deployed as a number 10, although we can see that he tends to operate on the left, where he looks to isolate the full-back and dribble. Under Lampard’s first two games in charge, Gray operated on the left-hand side of the front three. However, since then, Lampard has deployed a 4-4-2 and recently against City, a 4-3-3. In both of those formations, Gray could be deployed on the left.

Depending on the formation that Lampard chooses to deploy, Gray can operate either as floating number 10 or as a left-winger. He has already demonstrated his attacking threat in both of those roles, and he could provide Lampard with the attacking edge in the upcoming matches.