Everton have been one of the busiest sides in the Premier League since the beginning of the January Transfer window. Since the start of the year, they have acquired two full-backs, one winger and have let go of Rafa Benitez from the managerial position. In addition, they have announced the appointment of former Chelsea manager Frank Lampard as the successor of Benitez.

It was announced in the recent few days that Everton were in pursuit of Donny van de Beek. Since then, the Toffees have confirmed that the Dutch midfielder has joined on a loan deal. Everton were reportedly interested in bringing van de Beek in the summer but a deal could not materialize. Since joining Manchester United in the summer of 2020, van de Beek has always remained on the fringes of the squad. The 24-year-old has featured in just 24 games in the Premier League and 10 games in the Champions League since his arrival at Old Trafford. The Dutch midfielder has endured a difficult time since his move to English football and would be looking to turn his fortunes with his move to Goodison Park.

Among Everton’s multiple areas of improvement in the squad, the midfield was also a prominent one. In light of the Toffees’ injury crisis, a loan move for the Dutch midfielder could provide Everton with depth in their midfield while also giving van de Beek regular game time.

Let’s take a look at his stats to gauge whether the midfielder is ready for a career revival at Everton. 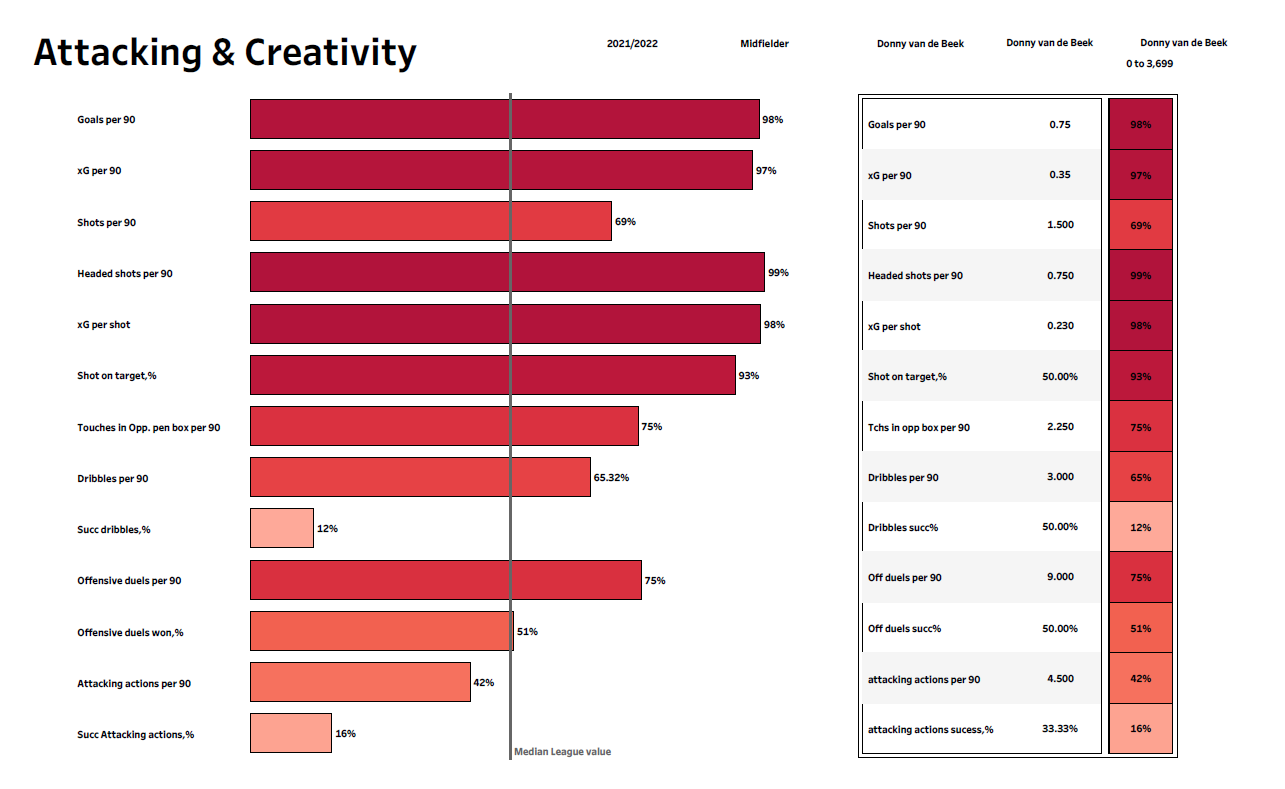 In the above viz., we can see van de Beek’s attacking and creativity stats. Most of his stats surpass the league median value, with the most notable stats being xG per 90, xG per shot, and shot on target accuracy. While analyzing the Dutch midfielder’s stats, we need to consider his limited game time as it can inflate some of his stats. Nevertheless, van de Beek has displayed glimpses of his quality in the limited appearances that he has been afforded this season. The midfielder is known for his technical ability and possesses impressive ability on the ball. He is strong under pressure and can retain ball possession in tight spaces as well. 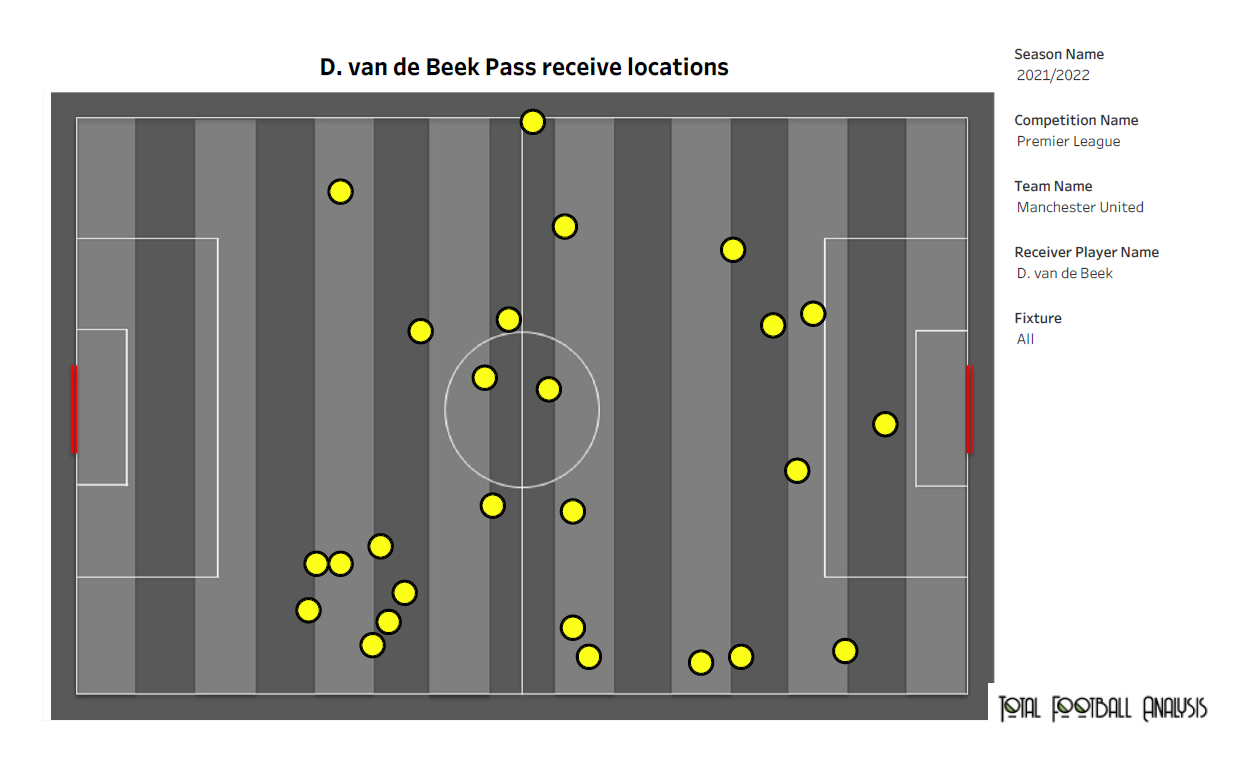 In the above viz., we can get a sense of the locations that van de Beek has dropped on the pitch to receive his passes. Van de Beek is known for his intelligence and possesses impressive game awareness. He is always on the lookout for his teammates in threatening positions and looks to play forward passes. Van de Beek’s positional play is also brilliant as he can position himself into pockets of spaces to receive the ball. We can see in the above viz that he has drifted to multiple areas of the pitch, including his defensive half. 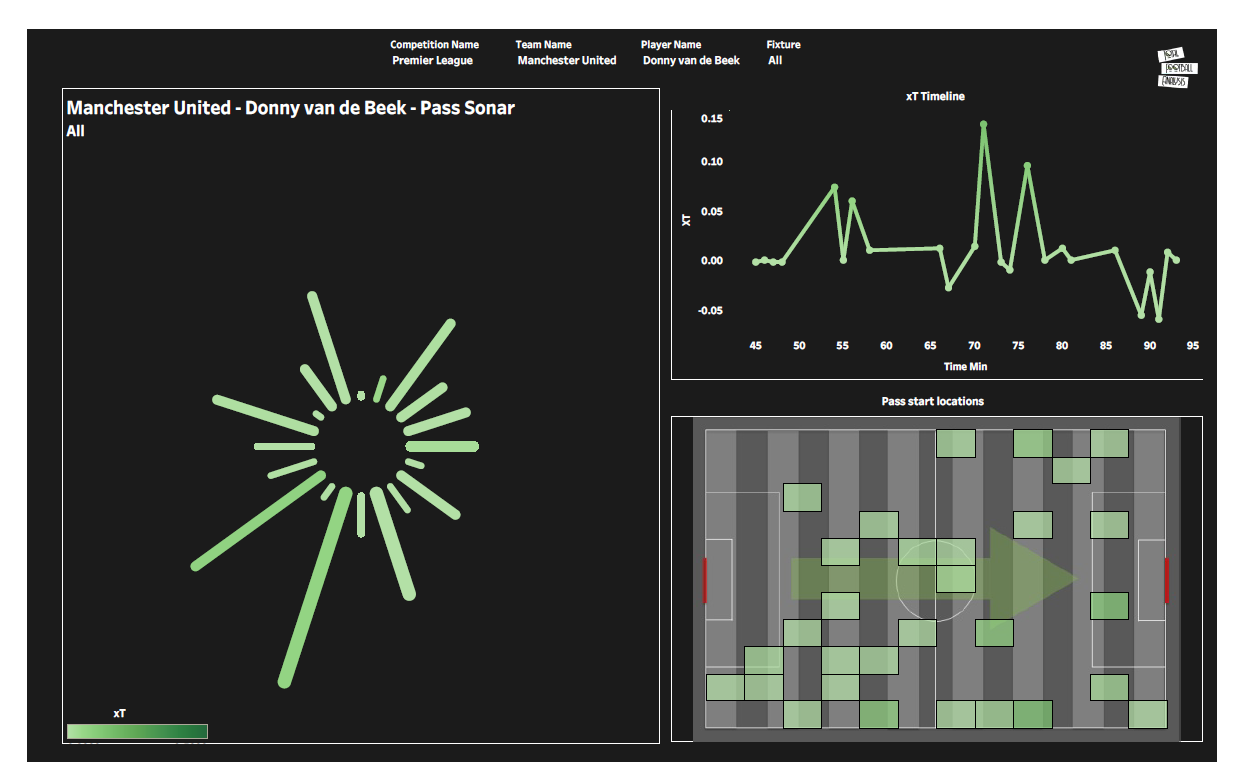 Another one of van de Beek’s best assets is his passing. He prefers to play quick and short passes and maintains high passing accuracy. The 24-year-old has can be deployed in multiple areas in the midfield, in the role of a number ten, in a box-to-box role, or as an anchor in the midfield. In the above viz., we can get a sense of the directionality of the Dutchman’s passes. In addition, we can see the location of those passes and the expected threat associated with them.

Van de Beek could prove to be a brilliant signing for Everton, given their lack of depth in the midfield. The Dutchman could be utilized in multiple roles and provide the creative output from the midfield that Everton seek.