Everton’s start to the season has plummeted from bad to worse in recent weeks. Last Sunday’s 2-3 defeat against Brighton at Goodison Park yet again reminded the fans of Rafa Benitez’s inability to impact the match with his substitutions. The Toffees have now won just one of their last 12 Premier League matches, a run that extends back to the end of September, and there are few signs to indicate that anything is going to improve immediately. Their poor run of form has seen them drop to 15th place in the league, with five wins, four losses, and nine defeats in 18 matches, and just two places above the relegation zone.

Benitez is under immense pressure to find solutions to improve his side if they are to avoid getting in a relegation battle. The problems that Everton manager is facing are multiple and varied. With the injuries to key players since the start of the season along with the departure of the Director of Football, things have not worked out in his favor since taking the managerial job at Goodison Park.

Everton have been wasteful in the attack, while they have been equally poor defensively. Their poor defensive form is further highlighted by the 32 goals conceded in the league. Along with underperforming centre-backs, Everton’s full-backs have also been overburdened this season. Seamus Coleman, who has been ever-present in the role of right-back for a decade, is in dire need of some rest as a decline in his form and speed is evident. Benitez’s fallout with Lucas Digne has made matters worse as he looks unlikely to play for Everton for the foreseeable future.

On the brighter side, Everton have shown their willingness to address their issues as evidenced by the signings of two young full-backs in the space of a few days. Scottish right-back, Nathan Patterson, has signed for Everton a few days after Ukrainian left-back, Vitaliy Mykolenko, was confirmed to have joined. The arrival of Patterson soon after that of Mykolenko could provide some relief in both the full-back positions, but Benitez would need to solidify his side’s overall defensive structure.

Let’s dive into some benchmarking stats in order to gauge the areas that Benitez needs to improve in Everton’s defense. 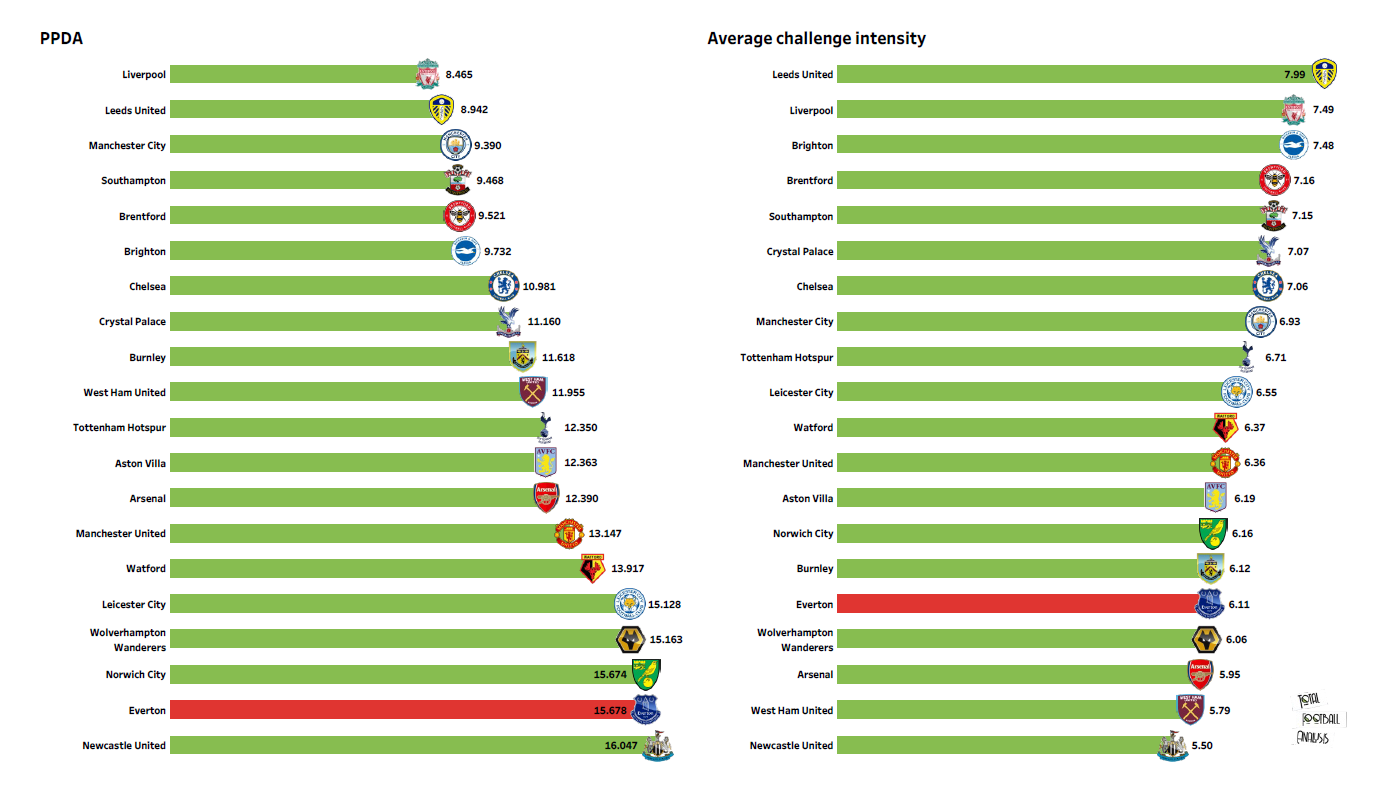 Everton’s PPDA value indicates that they have been poor in applying the defensive pressure effectively. In terms of PPDA, they rank at the 19th spot in the league. Everton have not fared well in terms of average challenge intensity as well, ranking at 16th spot in the league. While high pressing intensity is not the only way to defend, winning the ball high up the field allows teams to maintain their advantageous position on the field and carry on with the attack without readjusting the backline. 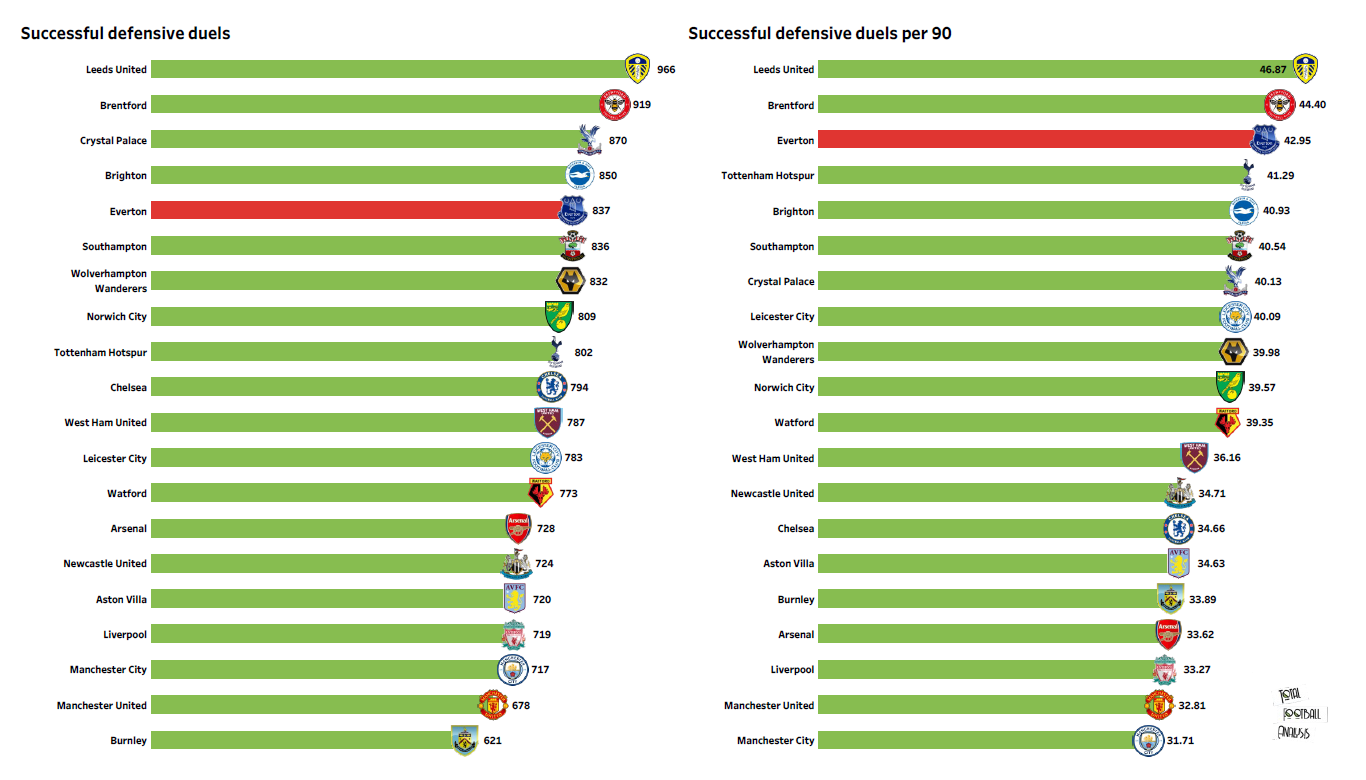 While at a glance, it may seem that Everton are faring well in terms of successful defensive duels, that is only because they have had to sustain more defensive pressure than their opponents. Benitez would need to sort out his side’s weaknesses in terms of defensive duels if his side is to gain defensive solidity. 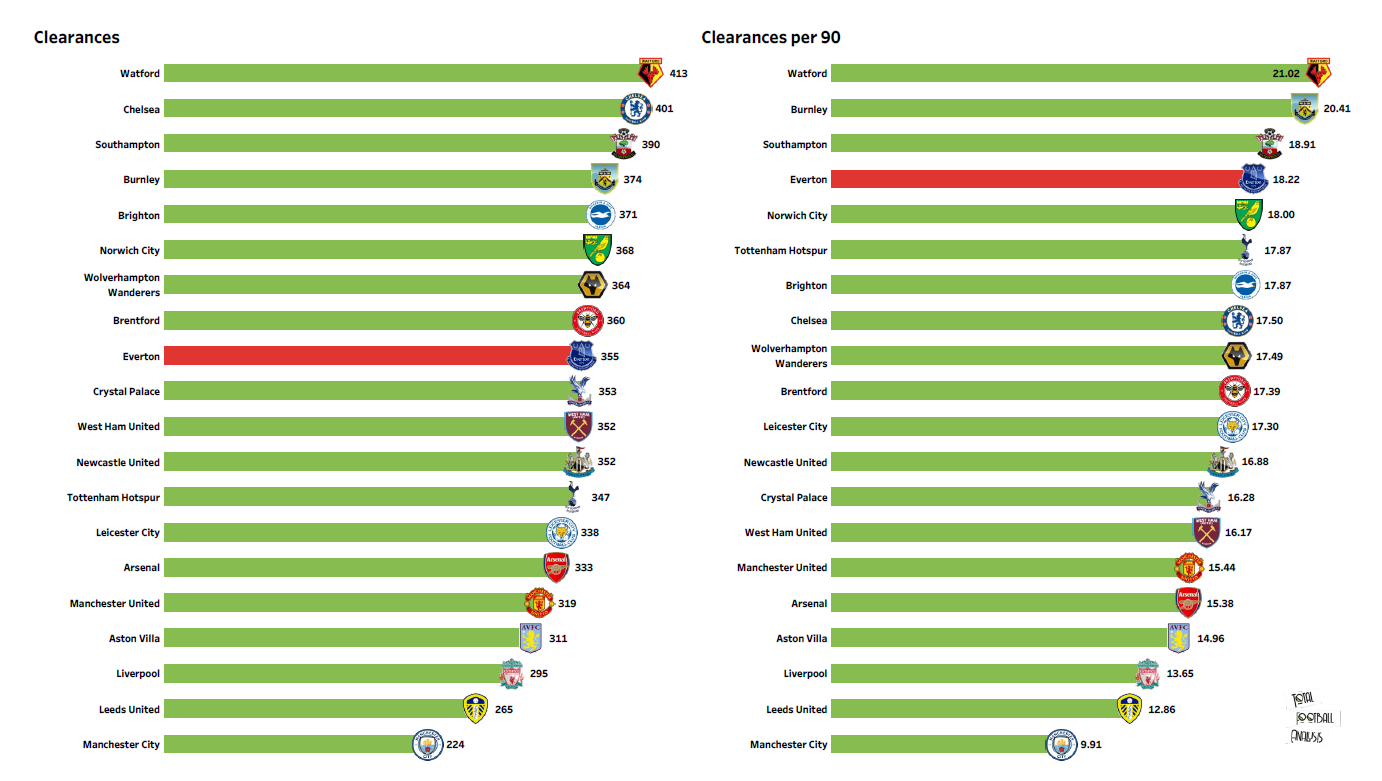 Another area of improvement for Everton’s defense is clearances. While their average clearances per match puts them at the fourth spot in the league, too often this season, they have been unable to clear the danger in their half, a scenario which has led them to concede many goals. 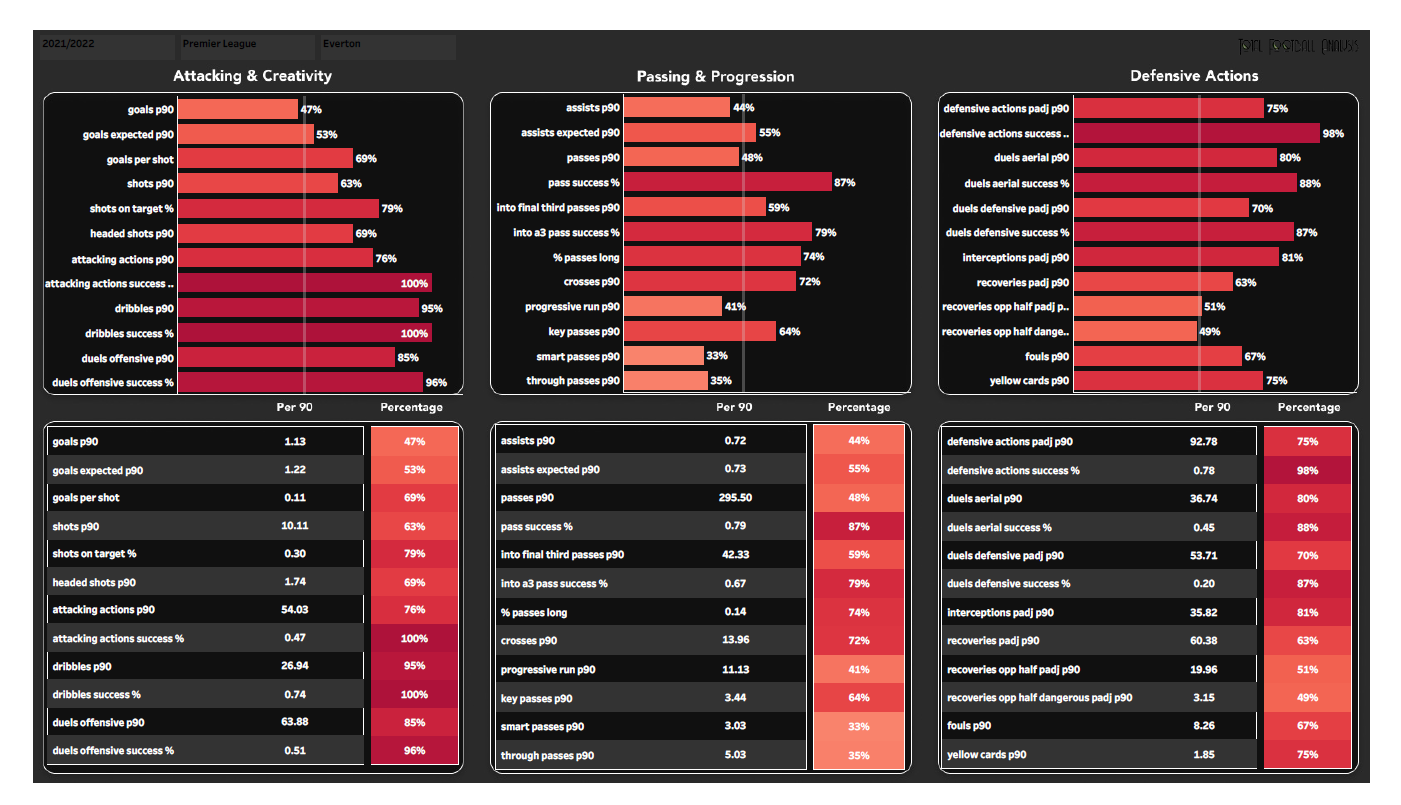 In the above slide, we can see an overview of Everton’s stats so far in the league. The above chart indicates that the Toffees have a lot of scope for improvement in terms of their recoveries in the opponent’s half.

With huge pressure mounting on Benitez to improve their on-field performances, more specifically their defensive solidity, Everton will need shrewd recruitments in the January window. While they have already begun to address their issues with new signings, Everton will need to rally up quickly if they are to avoid a worst-case scenario – a relegation battle.

Under the microscope: Could Anwar El Ghazi provide aid to Everton’s creativity issues?

Transfer Talk: A reunion with Benitez – Is Sean Longstaff the answer to Everton’s midfield issues?

Under the microscope: Could Anwar El Ghazi provide aid to Everton’s...

Transfer Talk: A reunion with Benitez – Is Sean Longstaff the...

Under the microscope: Key areas that Benitez needs to improve in...

We use cookies to ensure that we give you the best experience on our website. If you continue to use this site we will assume that you are happy with it.Ok