With just one win in their previous five matches in the Premier League, Everton would need to pick up points in their upcoming matches, if they are to survive in the Premier League. While the injury time 1-0 win over Newcastle was huge in the relegation battle, Everton are still not in the clear. They are currently placed in the 17th spot with seven wins, four draws, and 16 losses in 27 matches. Frank Lampard would need to rally his squad ahead of the international break.

Everton have a tough round of fixtures following the international break. They have five Premier League fixtures next month, and their opponents are West Ham, Burnley, Manchester United, Leicester City, and their Merseyside rivals, Liverpool. Among these teams, only Burnley are placed below the Toffees in the league table in the relegation zone. While every fixture would prove to be a tough test for Lampard’s men, they must ensure to pick up points away at Burnley. However, it could be tricky to pick up a win at Turf Moor.

Amidst the lack of resilience and consistency, Lampard would need to come up with a lineup to get through the upcoming tough round of fixtures. While there are multiple approaches on how Lampard could set up the team, a pragmatic setup could allow the Toffees to plant their feet firmly and distance themselves from the relegation zone.

Let’s take a look at some stats to gauge the lineup that could help Everton to turn their season around. 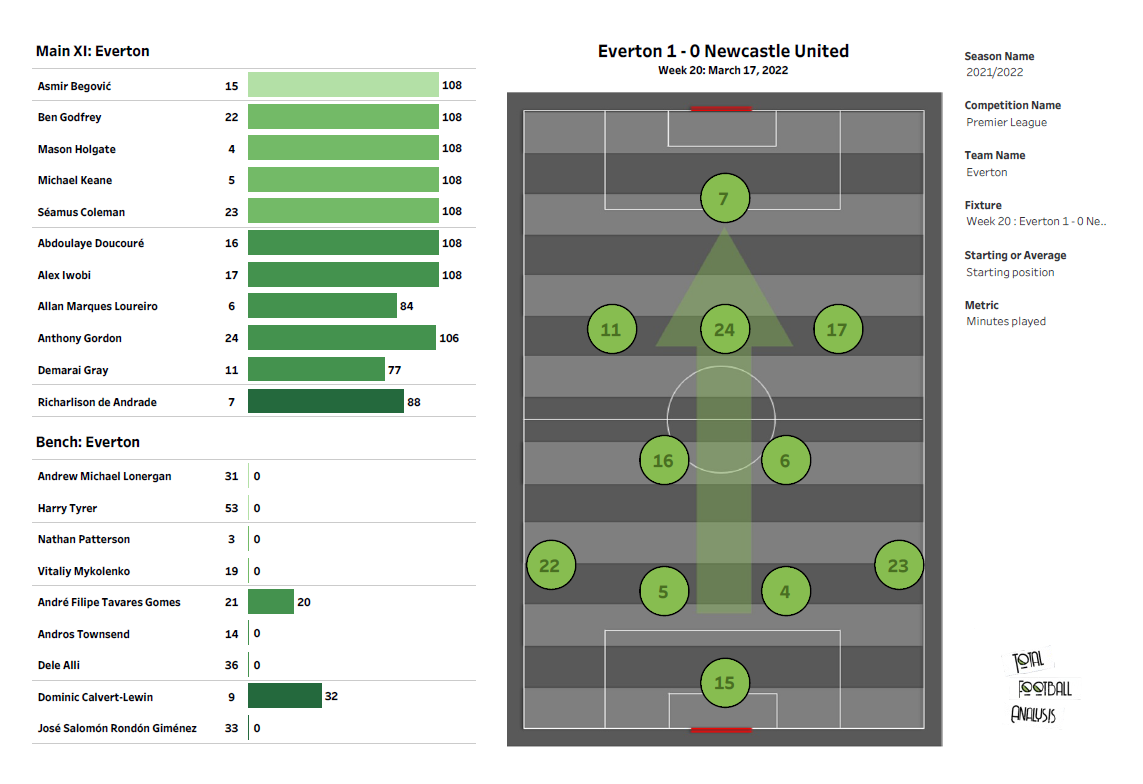 The above viz displays Everton’s lineup in the win against Newcastle. Lampard has tried out multiple formations and setups since he arrived at Goodison Park. While the injury situation has been a roadblock for Lampard to identify his best starting XI, the former Chelsea manager should perhaps focus on a single setup. Under Lampard, Everton have operated in a back three or a back four. In the above viz, we can see Everton’s 4-2-3-1 formation. Begovic was the man between the sticks, while Holgate and Keane were the two central defenders. Godfrey and Colemen occupied the full-back spots, with Doucoure and Allan in the midfield pivot. Gordon was deployed as a number 10, flanked by Gray and Iwobi on the wings. Richarlison led the attack upfront. Everton’s midfield has been one of their weakest areas as they are easily overrun. Moving to a three-man midfield could perhaps provide some relief to Everton in the midfield. With Van de Beek nearing his return, a three-man midfield of Van de Beek, Doucoure, and Allan could be Everton’s best bet. 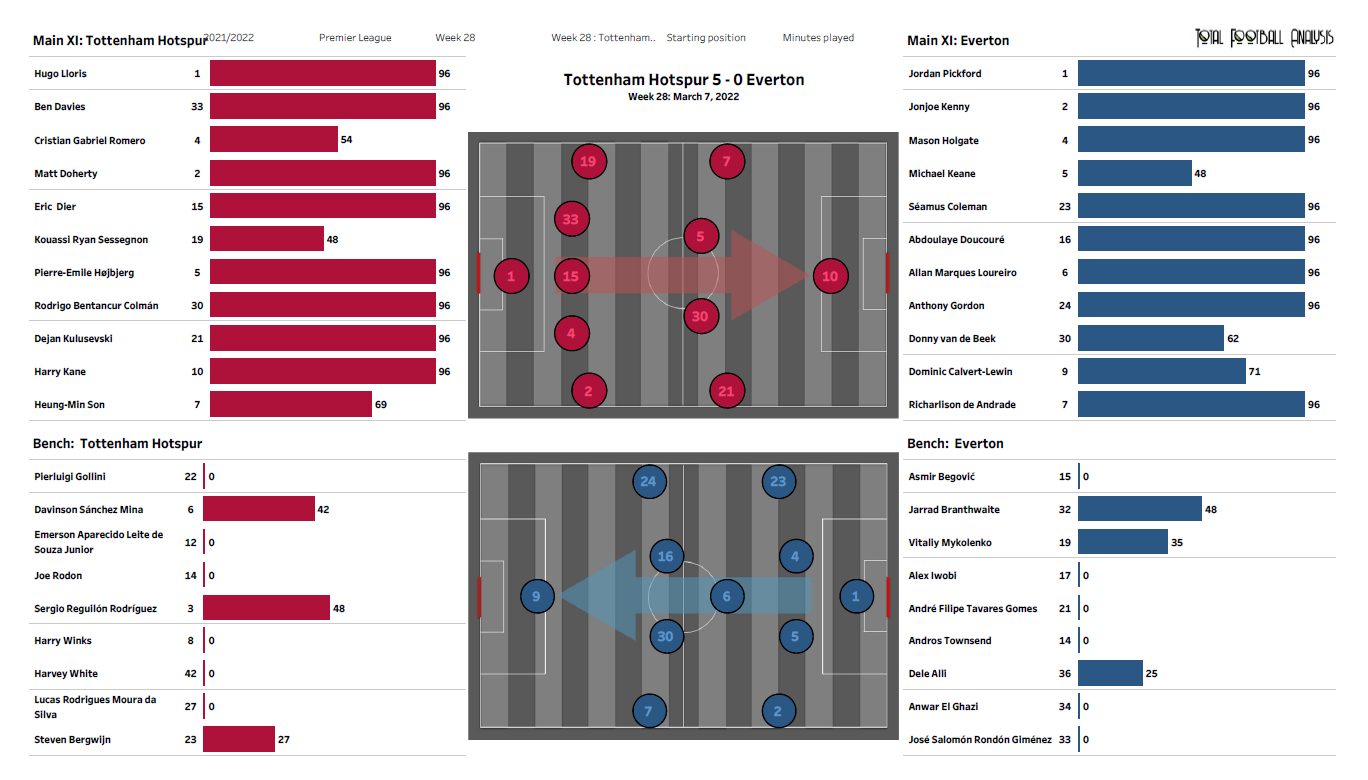 In the above viz, we can see the lineups of Everton and Tottenham. Everton lined up in a 4-1-4-1 formation. The two full-backs were Coleman and Kenny. While Everton did bring in two additional full-backs in the name of Patterson and Mykolenko, they haven’t been given the opportunity to play. Patterson is yet to start, while Mykolenko has made three and hasn’t made an impact. Coleman and Kenny seem like the most suitable options for the Toffees as full-backs.

The above viz displays Everton’s lineup in the defeat against Wolves. While Richarlison has led the attacking lineup for Everton in recent matches, re-integrating Calvert-Lewin in the starting XI could be impactful for the Toffees. The striker has not been in his best form since making his return from injury. Defense is another area where Everton have struggled throughout the season. Deploying Godfrey alongside Keane in the two centre-back spots is currently the best-case scenario for Everton as Yerry Mina is out injured.

A more defensive setup in the away matches could help Everton to pick up points in those games, while an attacking approach could be utilized in home games. The Toffees’ survival in the Premier League could be decided in the upcoming matches.