Everton are reportedly planning a move for Leicester City centre-back Jannik Vestergaard. The 29-year-old defender joined the Foxes from Southampton last summer, but since then, he has struggled to adapt to Brendan Rodgers’ defensive style. Vestergaard has made just 10 appearances in the Premier League this season. Although he has a contract with Leicester till 2024, the defender could reportedly be moved in the upcoming transfer window, with Everton emerging as one of his possible destinations.

According to some reports, the Toffees sent their scouts to watch Vestergaard in action for Denmark during the international break. Everton are in need of reinforcements in multiple areas of the pitch, and defense is one of the priorities. Michael Keane, Mason Holgate, Ben Godfrey, and Yerry Mina have all struggled with either performances or injuries. As a result of their defensive issues, the Toffees have so far conceded 47 goals this season, and they find themselves near the relegation zone. Vestergaard has reportedly been identified because of his aerial ability and his Premier League experience. He could possibly be the type of defender that Everton need.

After a disappointing season, the Toffees are battling against relegation, and adding a capable defender to their ranks in the summer would be prioritized. Although Vestergaard has struggled to get game time under his belt for Leicester, he had an impressive spell during his time with Southampton. With a towering frame, the Danish defender has the kind of presence at the back that could benefit Everton.

Let’s take a look at some stats to gauge if Vestergaard would be a suitable addition to the Everton defense. 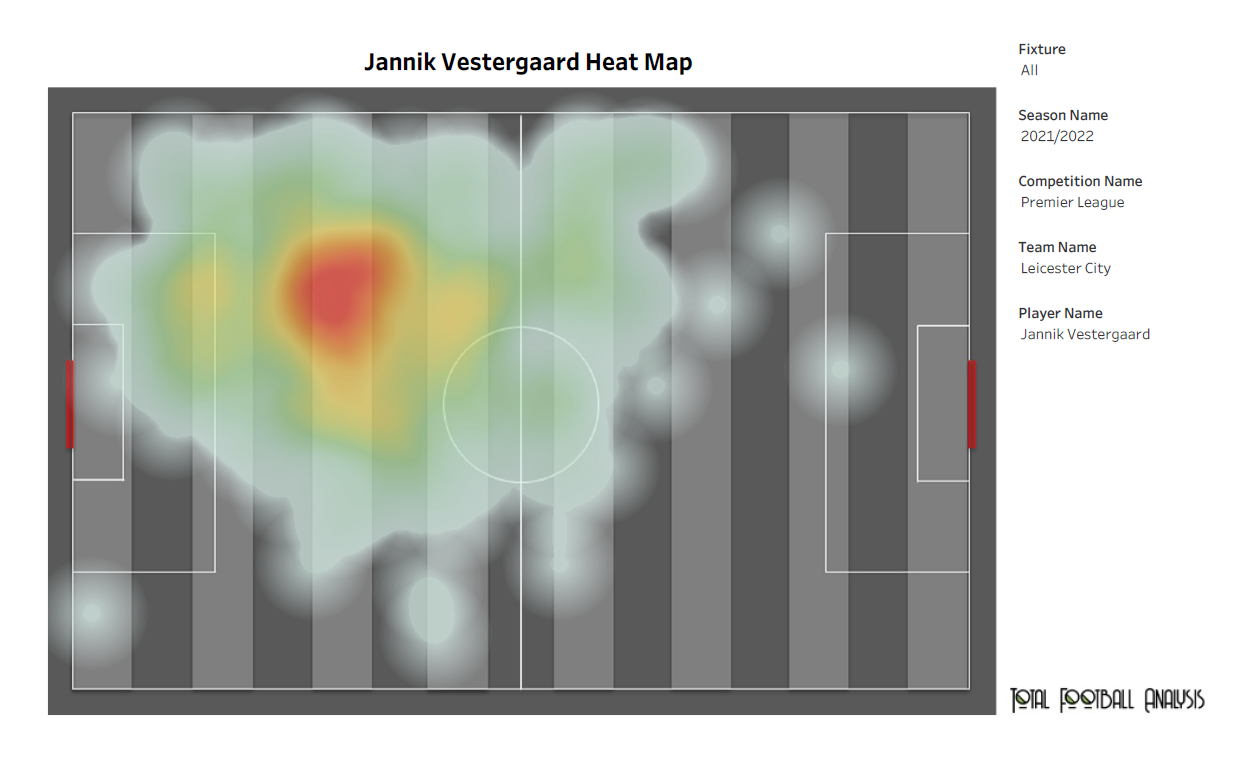 In the above viz, we can see Vestergaard’s areas of activity on the pitch. The 29-year-old has been mostly deployed as a left-sided centre-back this season. Vestergaard is a strong and physical centre-back, who uses his awareness and reading of the game to good effect. His towering frame aids him in winning aerial duels, and he is a threat during set-pieces. He remains calm and composed during the defensive phases of the match and is able to command the backline. Vestergaard’s ability on the ball allows him to aid his team in building up from the back. In the above viz, we can see his immense presence in the front of his defense, while also drifting towards the opponent’s half when required. 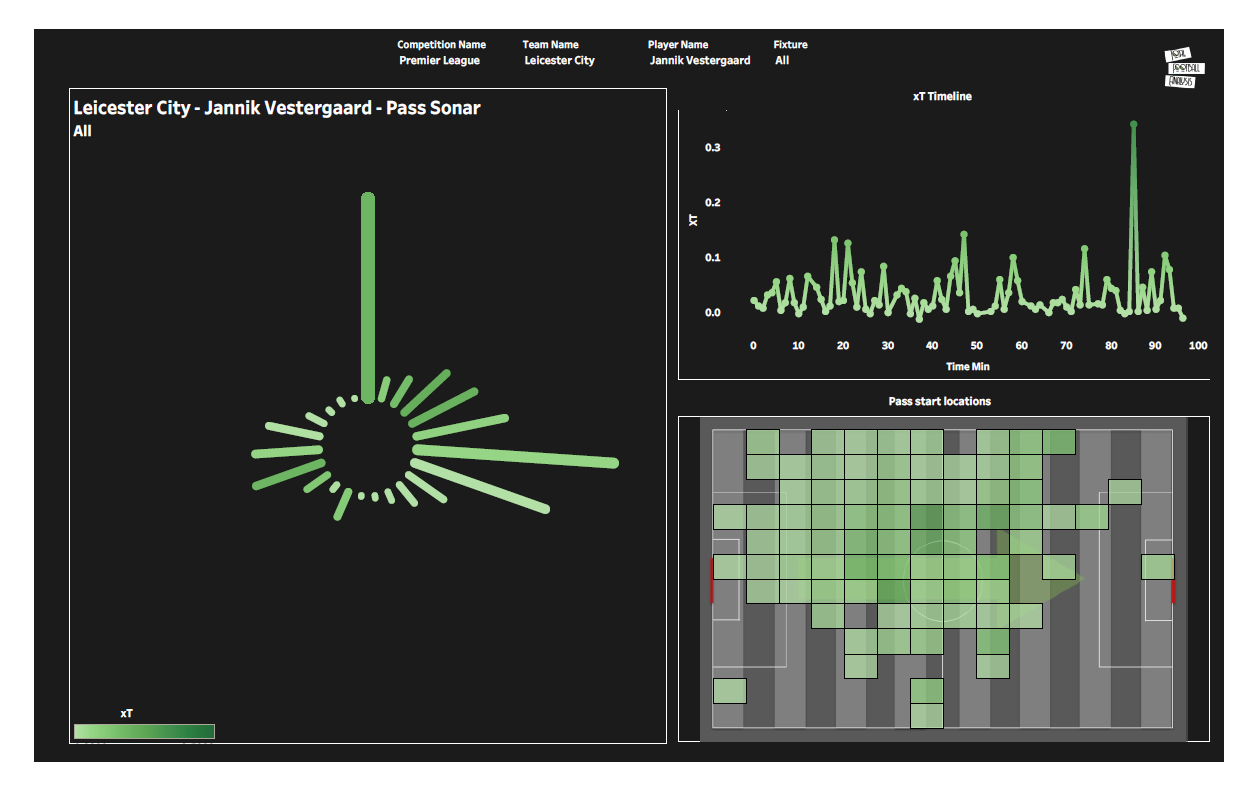 We can see Vestergaard’s directionality and range of passing in the above viz. Due to the nature of his position at left-centre-back, Vestergaard has delivered most of the passes towards the left wing in his half and in the opponent’s half, as seen in his ‘pass start location’. He remains composed and assured under high-pressure situations, displaying impressive positional play. 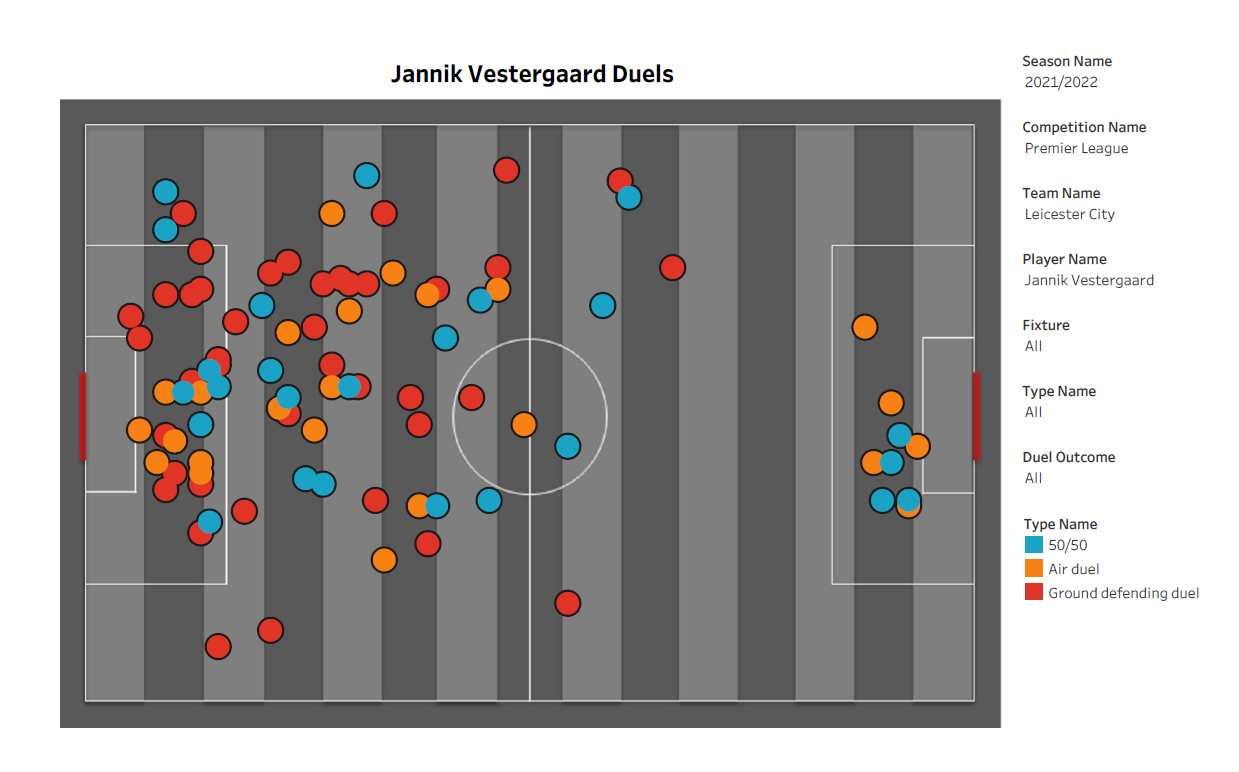 The above viz displays the defensive and aerial duels that Vestergaard has engaged in this season. We can see that he has been involved in a lot of defensive and aerial duels in his half. In addition, we can also see his involvement in aerial duels in the opponent’s half during his side’s set-pieces. Vestergaard remains calm under pressure from the opponent and utilizes his ability on the ball to dribble his way out and pick out a teammate. While his passing was criticized in the past, Vestergaard has since come a long way, improving a lot.

Vestergaard could prove to be a decent signing for Everton, as they currently lack an imposing presence in their backline. While he may not have been able to fit into Leicester City’s style of play, Vestergaard nevertheless, is a strong and capable defender.