Jesse Lingard is now a free agent after Manchester United released him following his contract expiry. He signed his first contract in 2011 and was sent on a few loan spells for more game-time. The 29-year-old became a regular member of the Red Devils squad in the 2015/16 English Premier League season. He spent every successive season with the first team, but in the 2020/21 season, Lingard struggled for game-time and was sent on a loan spell to West Ham United in the second half of the season. He was prolific in his short spell at the Hammers. Now, the England international is a free agent and a few Premier League clubs are after the player. Frank Lampard’s Everton are one of the teams willing to buy the player. Lingard offers a lot of creativity from the midfield and also likes to put pressure on the opposition players with his high-pressing. 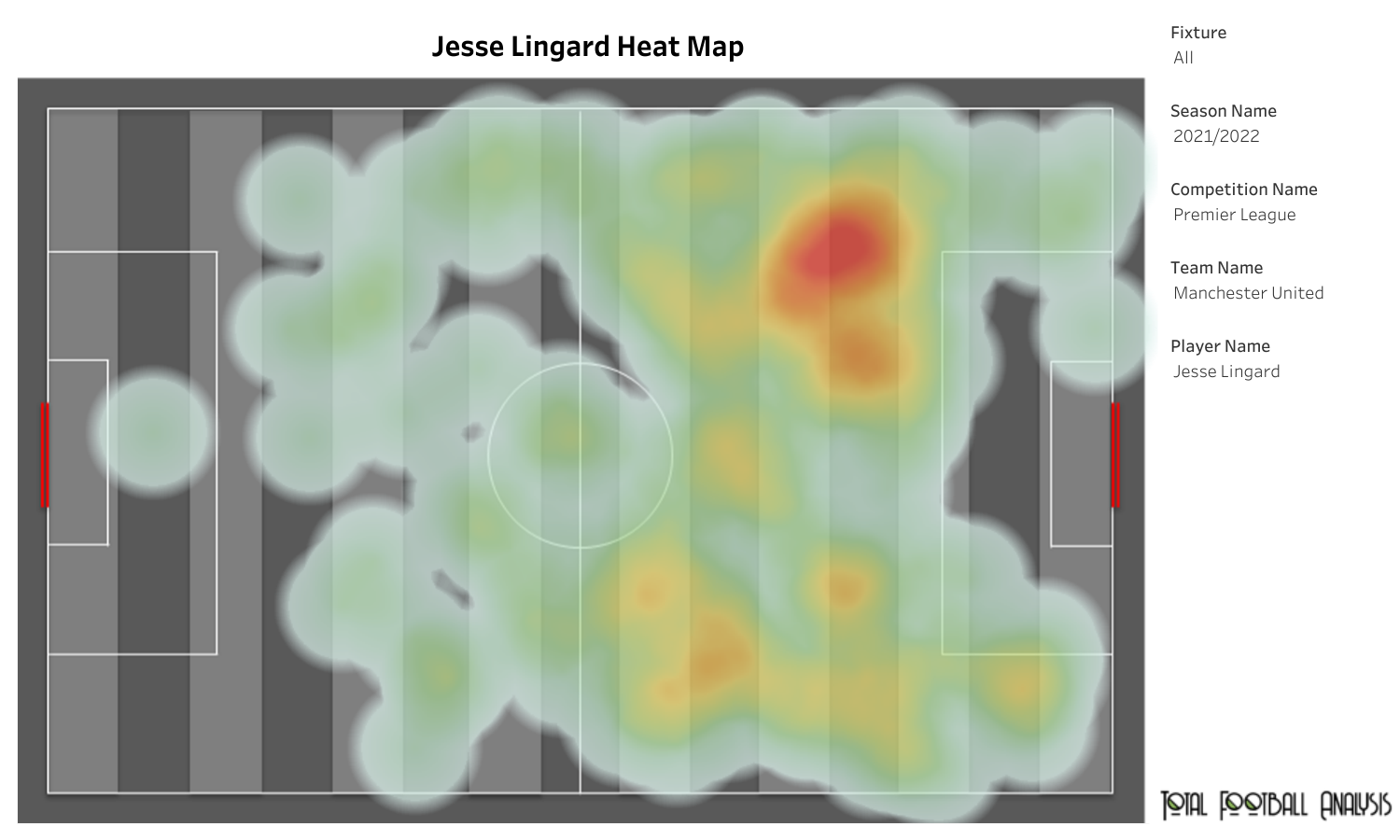 Last season, Lingard made 16 appearances in the league for Manchester United. He only started in two games. The player managed to find the back of the net twice, and both goals were scored in September. The above heat map shows his position in the English Premier League last season. Lingard is a versatile attacking midfielder who can play in the centre and on the wider sides. He likes to get involved in attacks and does a lot of running on the pitch. 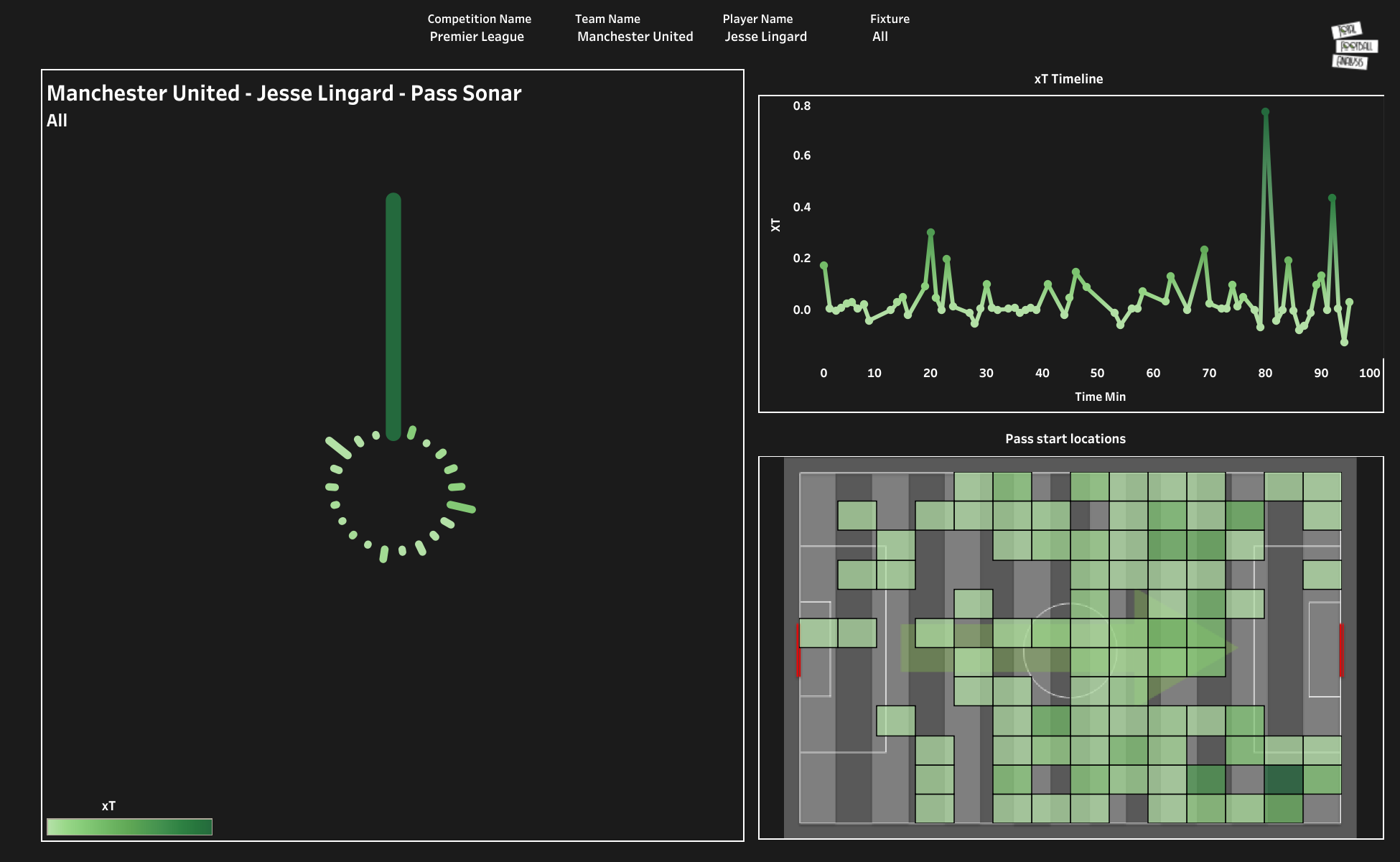 The above viz shows the pass start location and the threat created from passes at different time intervals. Lingard averaged 31.49 passes per 90 minutes with an accuracy rate of 83.87%. He averaged 1.83 crosses and 1.22 smart passes per 90 minutes. The pass start location map shows that Lingard made a lot of wide runs and attempted passes into the opposition’s penalty box. 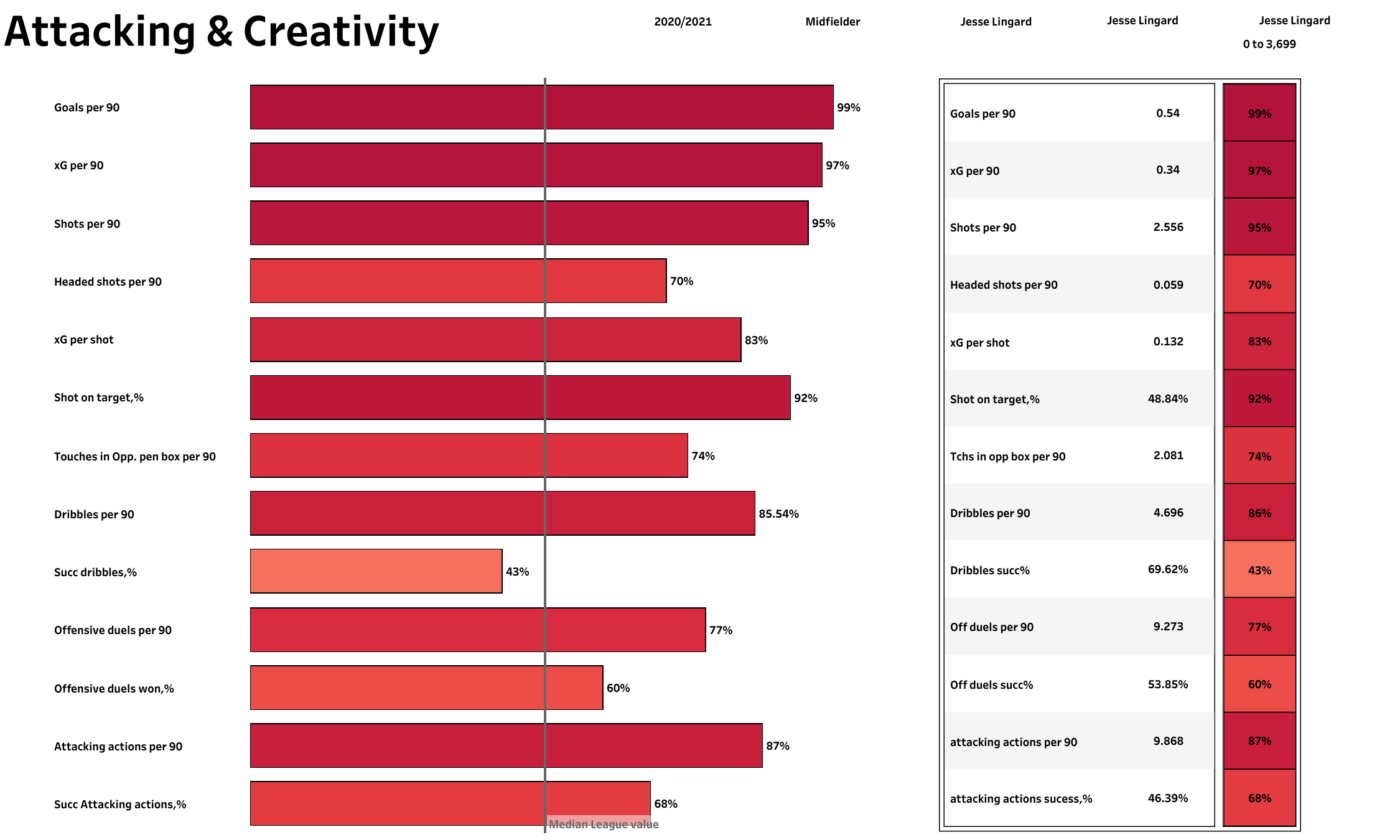 Due to limited opportunities, Lingard was unable to contribute a lot as he did for West Ham United in the 2020/21 season. He started in 16 matches for West Ham United and scored nine goals, along with four assists. When looking at the above chart, the general rule is that the longer the bar, the better the performance — you can see the league average in the middle, and the % is the percentile rank the player is in. Lingard had a very high percentile rank amongst other midfielders, and West Ham United were eager to bring the attacking midfielder back to their side. The Englishman attempted more than two shots per 90 minutes and had a high accuracy rate. Last season, his average went down to 1.6 shots per 90 minutes with an accuracy rate of 25%.

Jesse Lingard spent a successful loan spell at the Hammers, and this is the reason why a few clubs are fighting for his signature. West Ham United are one of the clubs competing with Everton. The 29-year-old brings creativity and attacking threats with him. He will add more dynamics to Everton’s attacks that struggled to score goals last season. Everton will have to persuade the player to move to Merseyside.