Following an impressive performance that saw them secure a 3-0 victory against Leeds, at Goodison Park, Everton were unable to carry their form to the away match against Southampton, as they fell to a 0-2 defeat. The two contrasting performances in back-to-back games were also evident in the first half of the season. Although they did start the match against the Saints well, Everton failed to take their chances and fell behind eventually.

Since taking over as the manager, Lampard has guided the Toffees to two wins and two losses. While there have been many positives in their wins, Everton’s away losses are becoming a cause for concern. The former Chelsea manager would be looking for some inspiration from his players in the away matches, and one of those players who can deliver is Brazilian forward, Richarlison.

Following his move to Goodison Park in the summer of 2018, Richarlison has established himself as one of Everton’s most effective players. The Brazilian has featured regularly and adapted well to the demands of multiple managers. While Richarlison has struggled with multiple injuries and has been inconsistent at times this season, Lampard remains assured of his qualities. Before the match against Southampton, Lampard expressed that Richarlison is ‘incomparable’ and that there is a lot more to come from the Brazilian. So far, the 24-year-old has made 16 appearances in the Premier League, scoring four times and laying three assists. Under Lampard, the Brazilian has been involved in two goals in four appearances.

Let’s take a look at some stats to gauge whether the Brazilian could be influential for Lampard in the upcoming games. 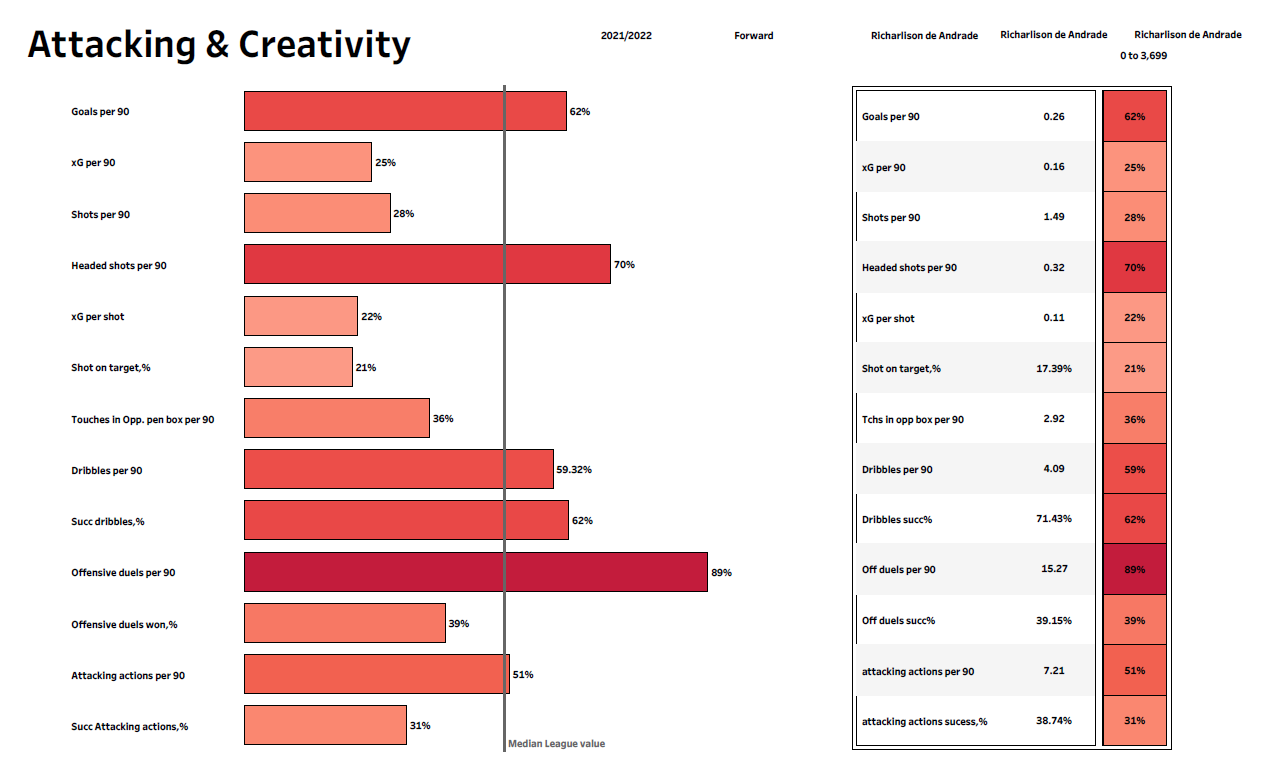 In the above viz., we can see Richarlison’s attacking & creativity stats. His stats indicate that the Brazilian has struggled to find consistency this season, as many of his stats are below the league median. His most notable stats are offensive duels per 90 and headed shots per 90. Despite his underwhelming stats this season, Richarlison remains a threat going forward and is influential for Everton’s attack. In the recent win against Leeds, he demonstrated his creativity and link-up play, making three key passes. He was relentless in his pressing and constantly caused problems for Leeds. 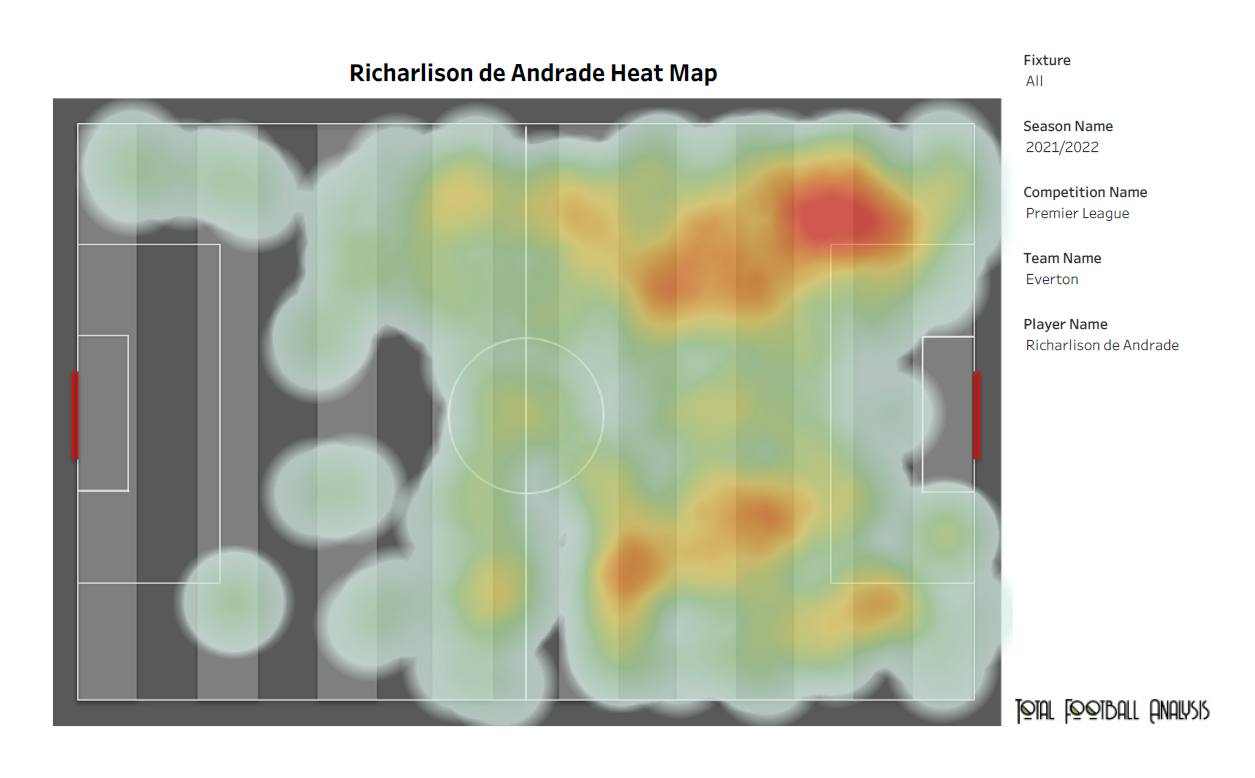 The above viz. shows the areas of the pitch where Richarlison is active. The Brazilian has a natural tendency to cut infield from the left, as he looks to create space for a shot. His passing style is direct and quick, and he links up well with other attacking players. Richarlison possesses explosive pace, and his direct style of running often causes problems for the opponent’s defenders. His combination play with other forward players, such as Calvert-Lewin, is impressive, and he can be frequently seen running the channels to create space for the English forward. We can gauge his impressive work rate and movement from the above viz. He has mostly occupied half-spaces on the left flank this season. 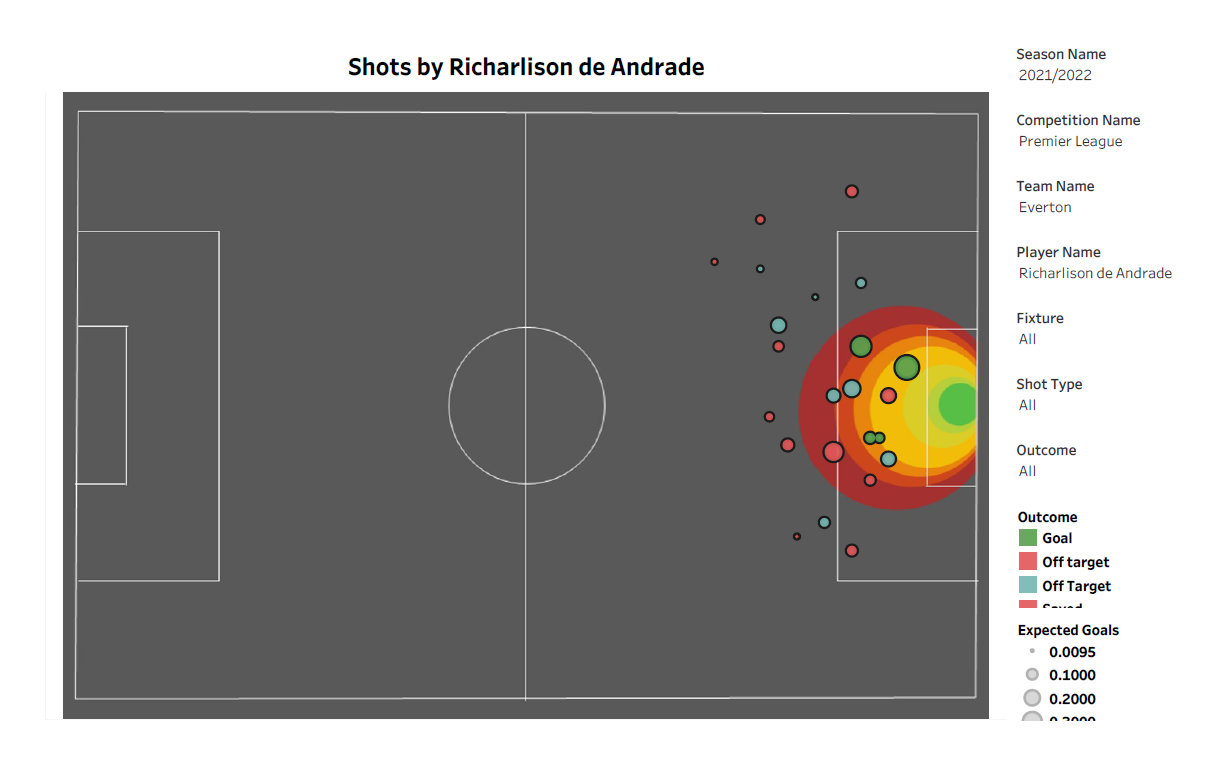 Richarlison is not afraid of taking a shot at the goal, as he often tries to look for a shooting opportunity. The Brazilian is also a threat during the set-pieces as he possesses impressive leap and excellent timing. The above viz. displays the locations of the pitch from where he has taken his shots this season. The 24-year-old has taken plenty of shots both from the inside and outside of the opposition’s box. All four of his goals this season have been scored from inside the box.

Over the past couple of seasons, Richarlison has shown plenty of glimpses of the qualities that he possesses. Although he has been inconsistent this season, Lampard could inspire Richarlison to achieve new heights as the season progresses.