Since joining Everton in 2009, Seamus Coleman has been a regular feature in the club’s starting XI. The Irish defender has made 314 appearances in the Premier League, scoring 20 goals and registering 24 assists. The 33-year-old right-back, who was handed the captain’s armband following the departure of Phil Jagielka in 2019, has been a mainstay in the Toffees’ backline amidst multiple managerial changes. For the entirety of Everton’s disappointing season till now, which has seen them drop to 16th position in the league table with five wins, four draws, and 11 losses, Coleman has shouldered the responsibility in the right-back role with next to no suitable replacement.

While a decline in his form has been evident for a while, Coleman was still the preferred right-back under Benitez. He has featured in 15 games for Everton in the Premier League this season, although many fans and pundits alike have highlighted that it might be time for Coleman to step aside and allow another suitable replacement to take his place as the club’s first-choice right-back.

With the arrival of 20-year-old right-back Nathan Patterson from Rangers, it’s looking likely that Coleman could soon be either put on the transfer list or be limited to substitute appearances. Patterson, who has gathered praise for his performances for the Scottish national team and Rangers, could soon be integrated into the Toffees’ first team, although much of that decision would be made by Benitez’s successor as the manager of Everton.

Let’s take a look at Coleman’s stats to gauge whether or not he should continue as Everton’s first-choice right-back. 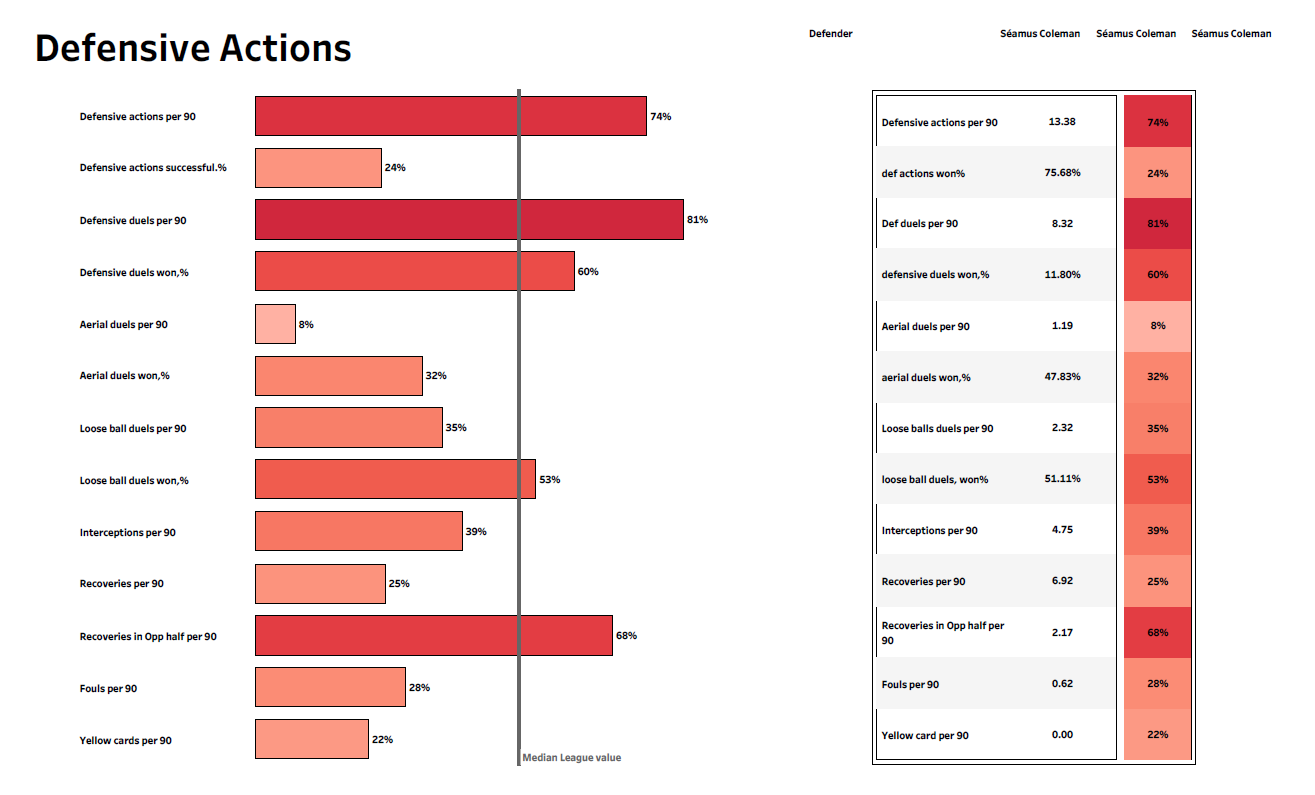 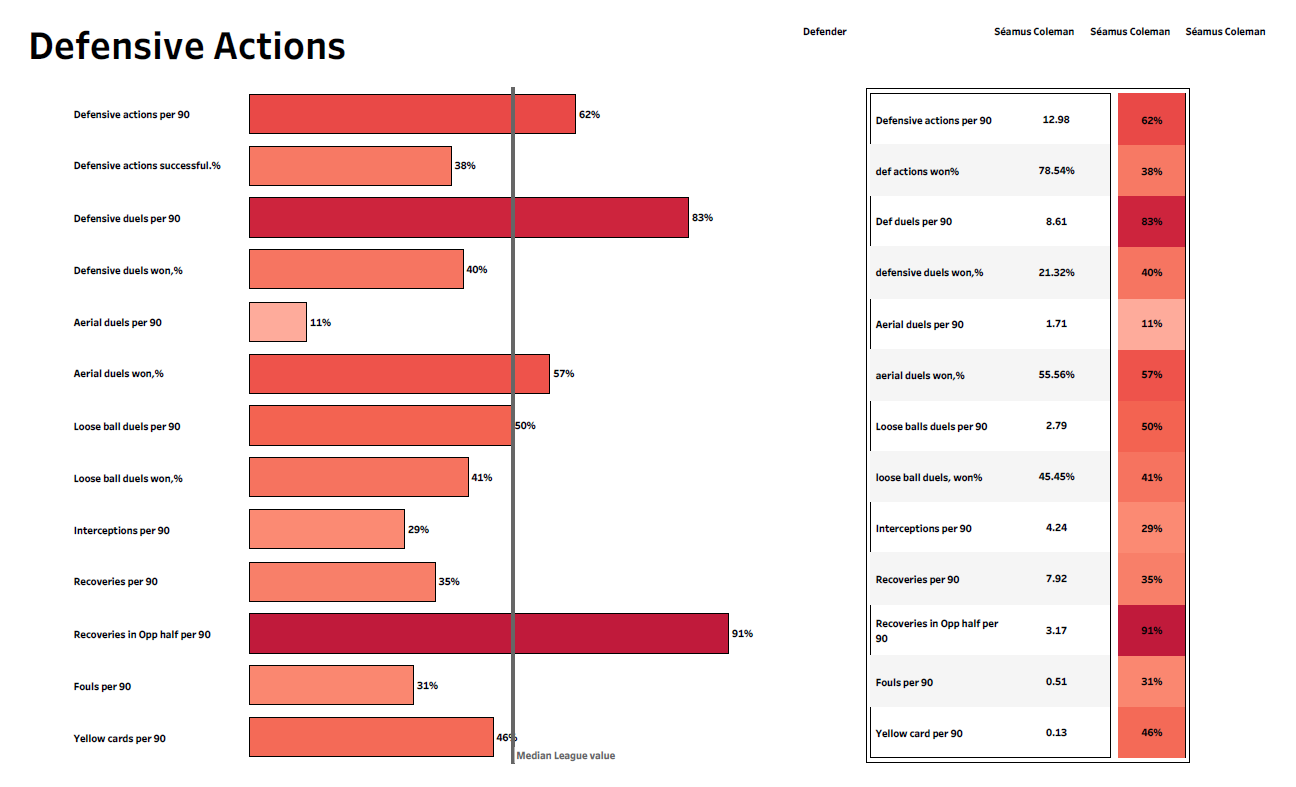 Comparing Coleman’s defensive stats last season with the current season, it is difficult to accurately pinpoint the areas where he has underperformed. However, there is no considerable improvement in any of his defensive stats, and we can gauge an overall decline in many of those stats. The most notable stats that have declined are defensive actions per 90, defensive duels success rate, loose ball duels success rate, and interceptions per 90. In addition, Coleman has consistently lost possession on multiple occasions this season. 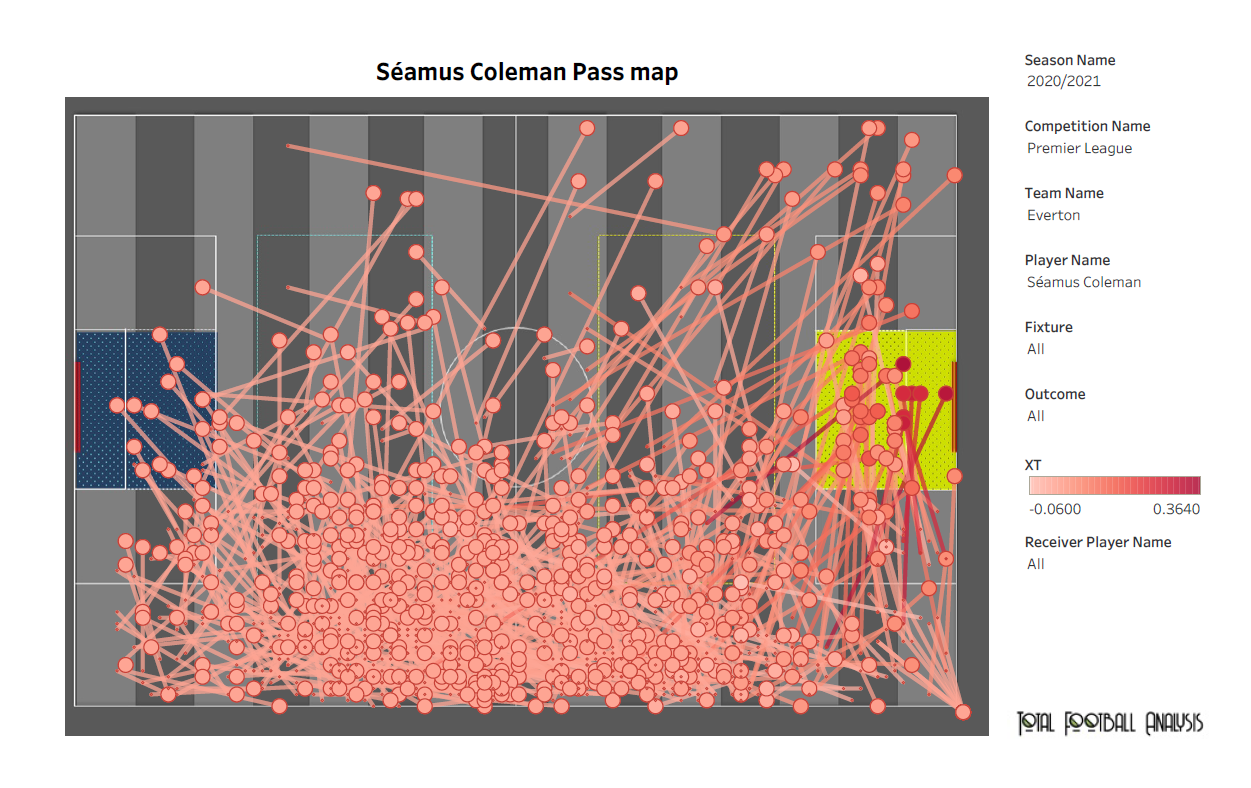 The above ‘pass map’ indicates the areas of the pitch where Coleman delivered his various passes last season. We can see that Coleman was frequently delivering crosses and passes from the wide areas into the opposition box. Many of his crosses into the box carried a high threat, as indicated by the darker red shade. In addition, Coleman had zero errors directly leading to a goal in 25 appearances. 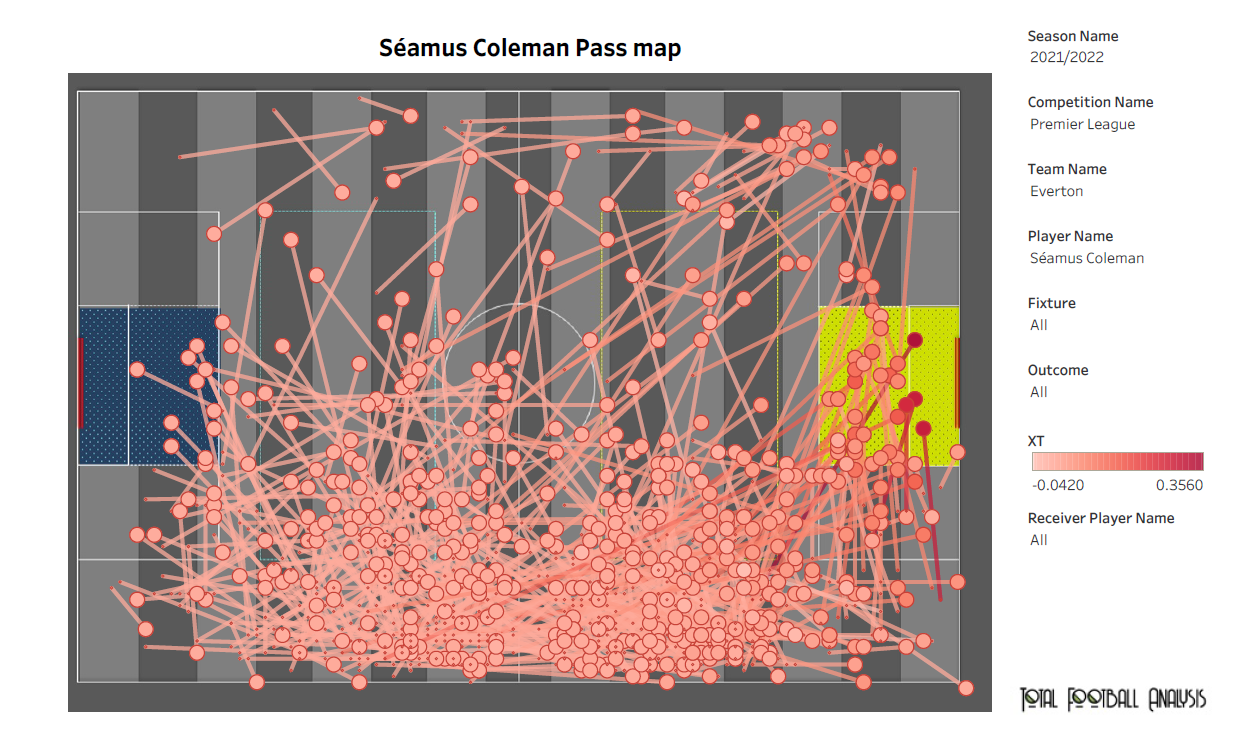 The above viz. highlights the areas of the pitch where Coleman has delivered his multiple passes in the current season. Comparing both the maps, we can see that Coleman’s ability to get into the wide areas and deliver threatening crosses has suffered a decline. While the decline is not that massive, nonetheless, Coleman has failed to register a single assist so far this season. In his 15 appearances so far, Coleman has made multiple errors directly leading to a goal.

In modern football, the role of a full-back has become very demanding, especially in recent times. Whether the role is that of a wingback in a back-three system, that of a more traditional right-back, or a left-back, the players in that role are expected to track up and down the pitch constantly and provide consistent attacking threat through overlaps or crosses. At 33 years, Coleman is now at the back-end of his career, and his performances have been declining steadily. While the Irish right-back remains the captain of the team, Everton should consider integrating a younger player with potential, such as Nathan Patterson, in that role.