Since the beginning of the January transfer window, Everton have not wasted any time to become active in the transfer market. Within the first four days of the window, the Toffees have already bolstered their squad by completing the signing of two full-backs. Left-back Vitaliy Mykolenko has joined from Dynamo Kyiv, while Scottish right-back Nathan Patterson has moved from Rangers.

Everton have struggled throughout the season to produce a decent string of results. Their poor form is highlighted by the fact that they have managed just one win in the Premier League in their last 12 games. Everton’s hopes of starting the new year with a decent result were hampered last Sunday, as they lost their first match of the year at Goodison Park against Brighton. Constant injuries to several key players have played a major role in the Toffees’ disappointing form. Manager Rafa Benitez has indicated on multiple occasions that the club would need to bolster the squad in the January window. Benitez has taken the responsibility for his side’s poor run of form but claimed that it’s been tough to lose the quality of players as he has.

In the last couple of days, news of Everton’s interest in signing Newcastle midfielder Sean Longstaff has surfaced. Although Newcastle are keen to keep hold of the midfielder, Longstaff will be out of contract at the end of the season. The fact that Newcastle have shown interest in signing Everton left-back Lucas Digne, who has fallen out of favor with Benitez, and that Longstaff has worked with the Everton manager during his time with the Magpies, makes it likely that a deal could go through.

Benitez, who handed Longstaff his debut, is a huge admirer of the Englishman and had previously claimed that the midfielder should be in the England set-up.

Let’s take a look at some stats to gauge whether Longstaff can flourish under Benitez and provide relief to Everton’s midfield issues. 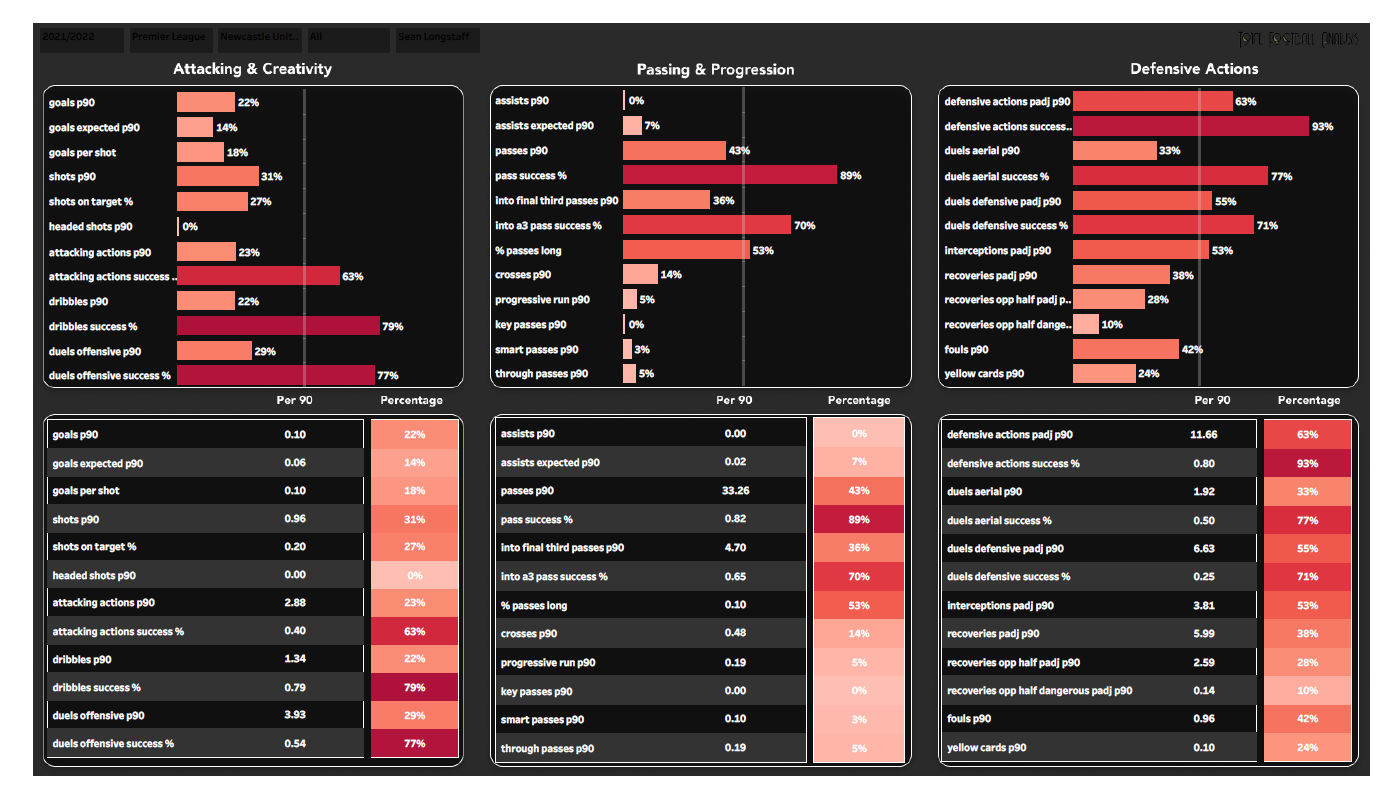 Longstaff has made 13 appearances this season, scoring one goal and adding a further assist. Longstaff’s stats this season have mirrored that of his side, as Newcastle have been poor all season and are placed near the bottom of the table in the relegation zone. Despite his side’s poor form, Longstaff has managed to fulfill his duties to the best of his abilities. As Newcastle have had to sit deep in the majority of their games this season, his defensive stats fare well in comparison to his attacking and creativity and passing and progression stats.

Under Benitez, Longstaff made meaningful contribution for the Magpies. Longstaff is a confident and tall passing midfielder who utilizes space around him effectively. In the previous seasons, he was rarely caught out of position and played in a deeper role. The midfielder is known for being assured in possession and does not take a lot of risks. His pass map indicates the wide array of passes that he has made this season. We can see from the map that he has made multiple threatening crosses into the opponent box. Currently Everton are lacking options in the engine room as Doucoure and Allan have been overburdened. Longstaff can provide an option in the midfield for Benitez. 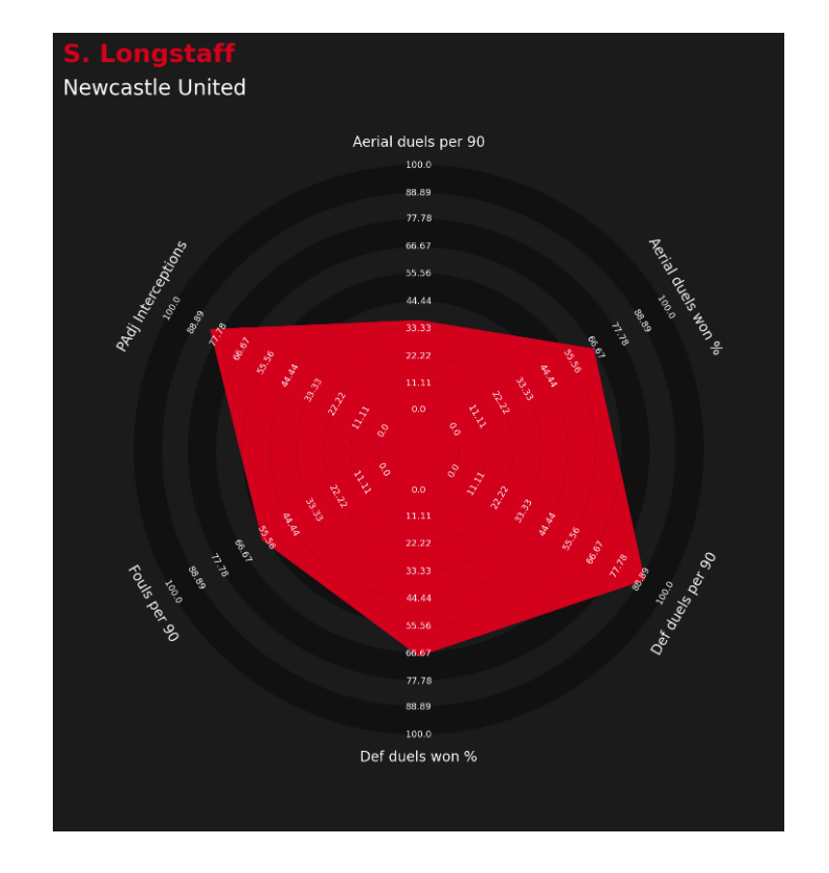 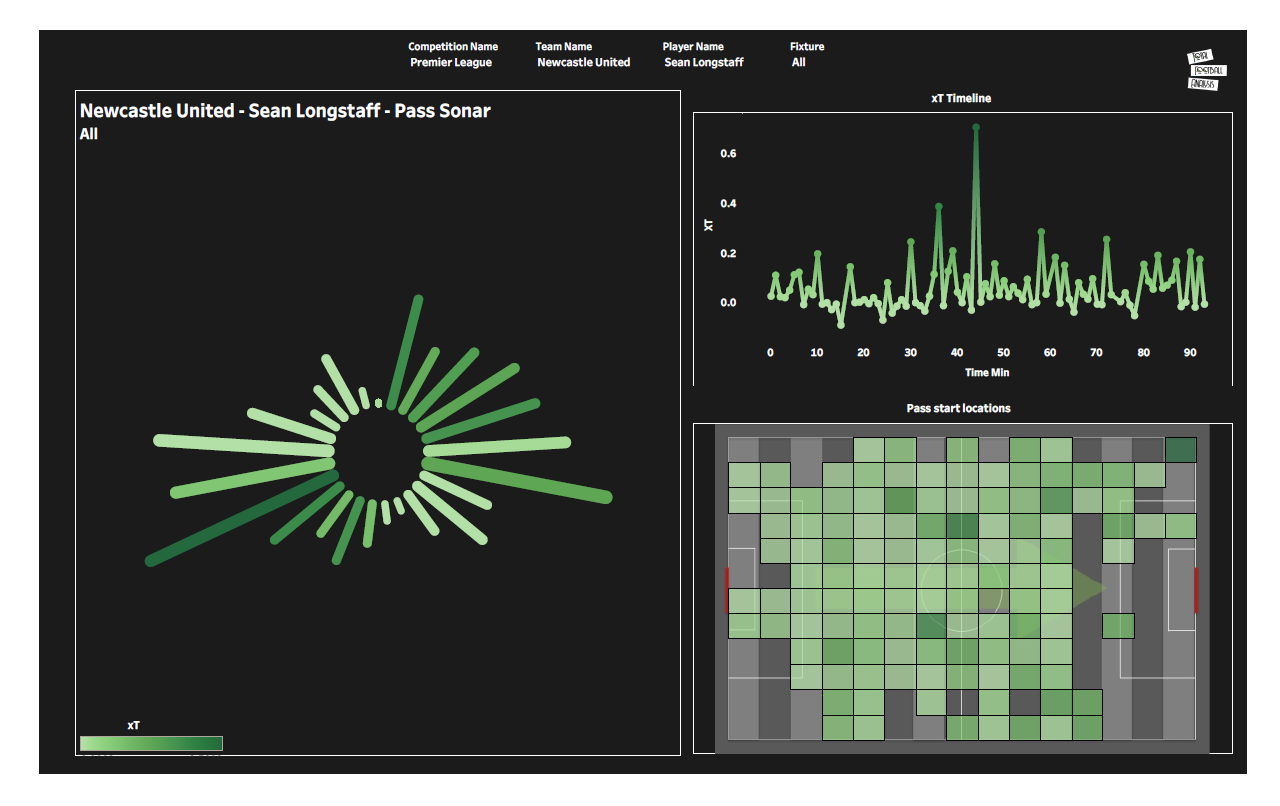 Pass Sonar outlines the direction of pass that a player or a team tends to make and indicates a player’s influence on the movement of the ball. In addition, it shows the frequency distribution of different passing angles for an individual player, as well as the typical length of pass attempts. We can gauge from his pass sonar that Longstaff is adept at spraying passes in multiple locations on the pitch.

Everton are in a need of a midfield engine who is capable of breaking up the attacks and contributing to the attack as well. Longstaff possesses the qualities that Benitez requires in the midfield with his composure on the ball, work rate, and distribution. Everton’s manager is familiar with the qualities that Longstaff can bring to Goodison Park and a potential deal could work out in favor of Benitez.