Frank Lampard’s tenure as the Everton manager started with an impressive win over Brentford in the FA Cup. The Toffees dismantled the Bees 4-1 at Goodison Park. While it is still too early to read too much from just one match, Everton did look like a side that has been transformed as Brentford found it difficult to break down the Toffees’ defense. The defense lined up in a back-three formation comprising of Holgate, Keane, and Godfrey. However, 14 minutes into the match, Godfrey had to be withdrawn, as he picked up a calf injury. Yerry Mina came on for Godfrey and brilliantly made his mark as he headed home a corner from Demarai Gray.

Mina has struggled with multiple injuries for the better part of the first half of the season. The former Barcelona man has made just nine appearances in the Premier League this season, as his side has struggled to perform and dropped off to 16th place. However, with a new managerial appointment and reinforcements in the squad, Everton would be looking to turn around their season as they head into the second half of the season, and Yerry Mina could play an important role for Lampard. The Columbian was one of the few standout players under Benitez and could replicate his form for his new manager.

In addition to scoring the opener against the Bees, Mina delivered an all-round robust performance at the back. His form in the recent match should put him in contention for a place in the starting XI as Everton travel to St. James’ Park for their upcoming Premier League fixture.

Let’s take a look at his stats to gauge whether the Columbian international is the centre-back that Lampard needs for his side to climb up the league table. 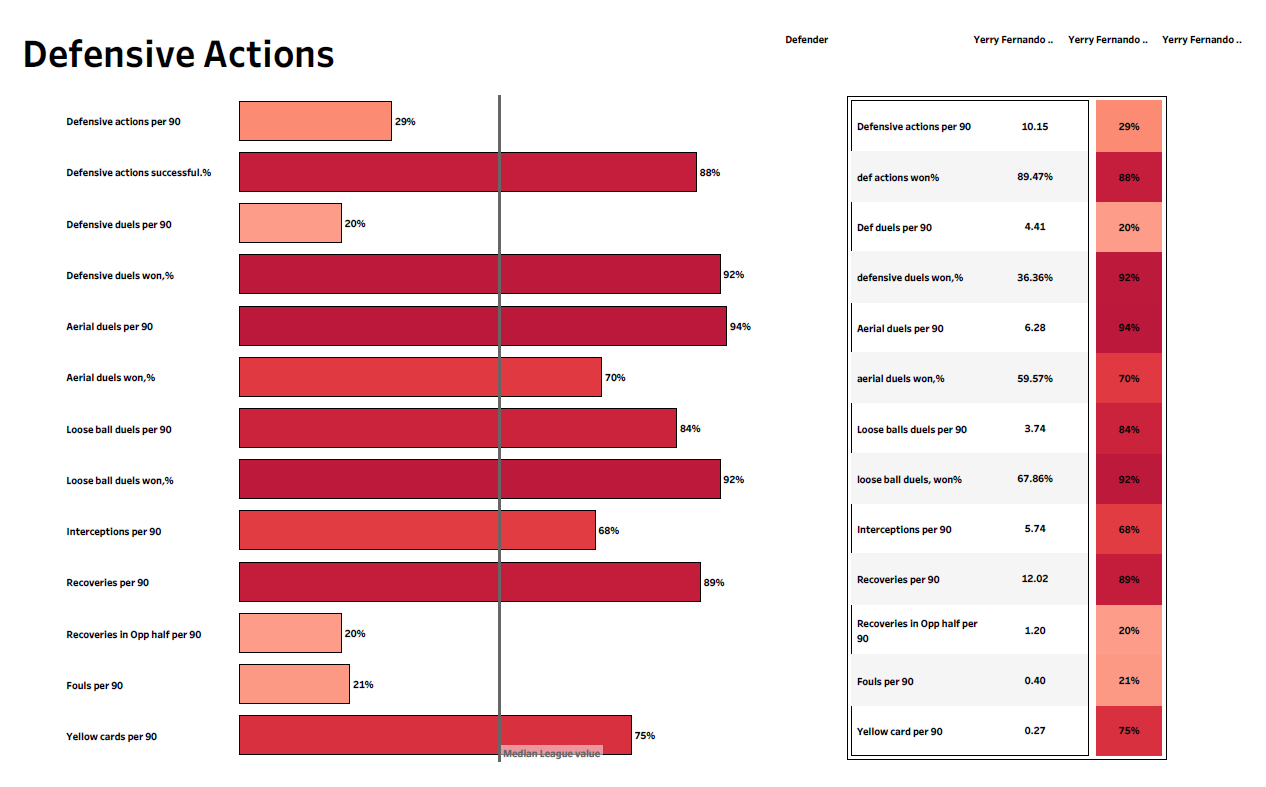 In the above viz., we can see Mina’s defensive stats from his nine appearances in the league. The majority of his stats surpass the league median, with the most notable stats being successful defensive actions, defensive duels won, aerial duels won, and loose ball duels won. In addition, the 27-year-old has made more than five average interceptions and upward of 12 average recoveries. Mina is a powerful and imposing centre-back who is dominant in the air. He is confident on the ball and can carry it out from the back. His impressive finishing ability with his feet combined with his dominance in the air makes him a huge threat during the set-pieces. 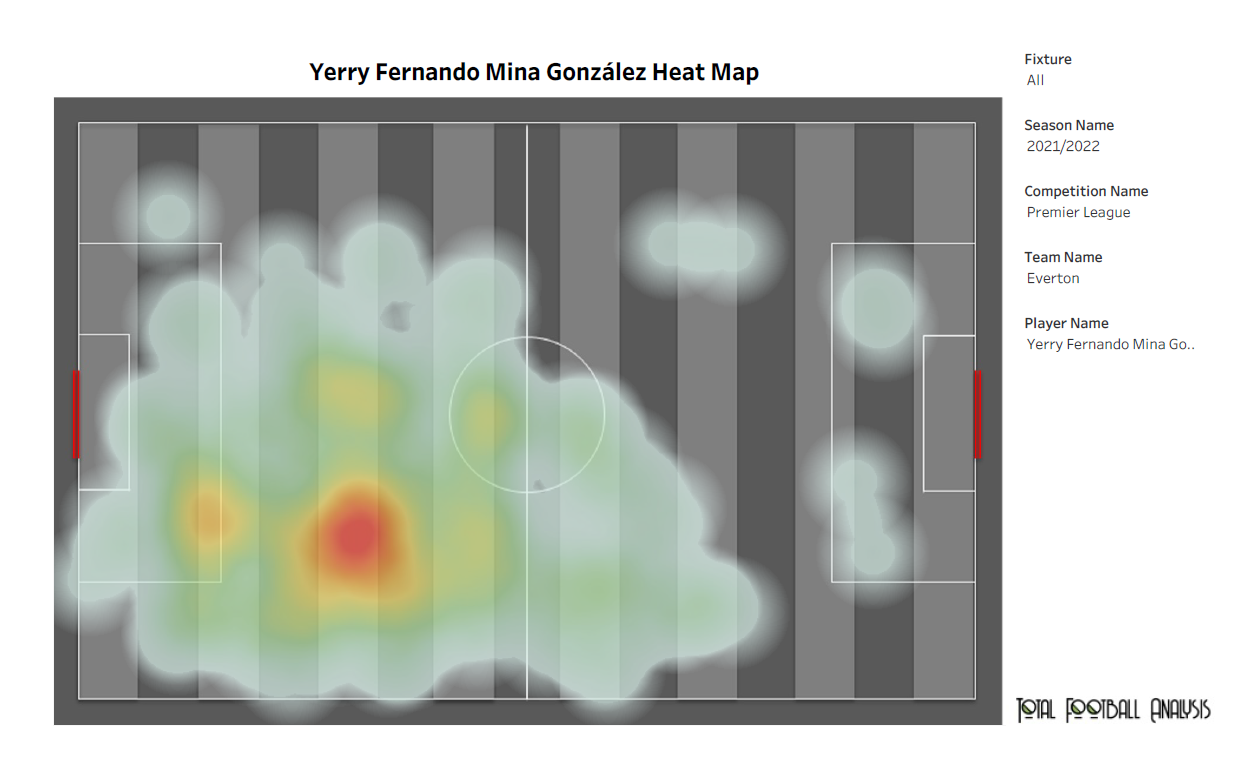 His ‘heat map’ highlights the location of the pitch where he is most active. We can see that he spends most of his time on the right side of his defensive half. If Lampard decides to progress with the back-three formation, he could deploy Mina as a right centre-back or in the middle. Mina’s composure with the ball at his feet and his capability of playing a pass through the midfield or a diagonal cross-field ball could make him an important asset for his new manager. 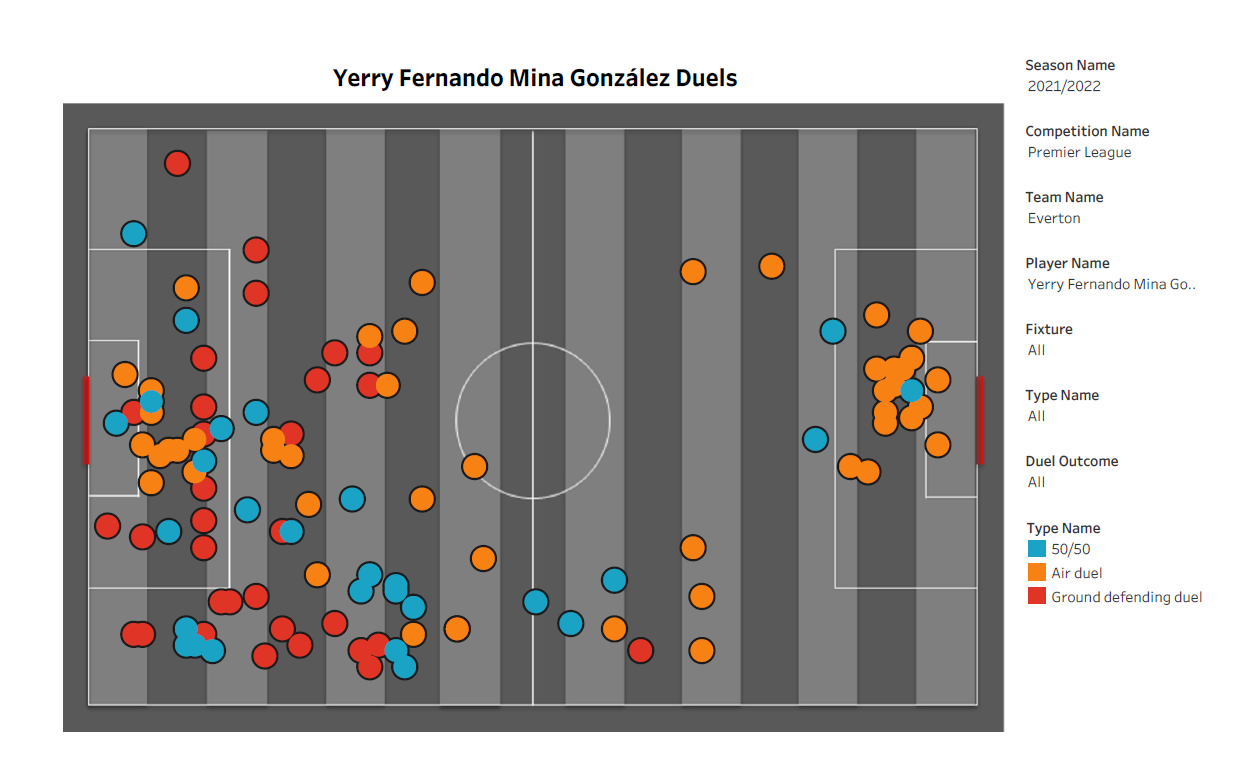 A 6’5″ centre-back, Mina utilizes his frame exceptionally well and usually comes out on top in an aerial duel. He is a constant threat during the set-pieces. We can see in the above viz. the locations on the pitch where he engages in defensive and aerial duels. Mina is adept positionally as well and regularly places himself in good defensive positions. His awareness and tactical understanding of the game are impressive as he is constantly ahead of his marker, intercepting the ball. The Columbian’s timing of the tackle further highlights his awareness.

Mina’s recent performance in the match against Brentford would give him an edge ahead of his fellow defenders. The 27-year-old could become an important defender for Lampard as the Toffees look to revive their fortunes, heading into the second half of the season.