Everton will host Brentford at Goodison Park in the English Premier League. The two teams are separated by seven points, with Brentford having the upper hand over their opponents. The hosts are unbeaten in their last three league games and last four home games. They have moved out of the relegation zone and have almost ensured their safety. The Bees have a nine-point gap between them and the relegation zone and are looking to end the season on a high. 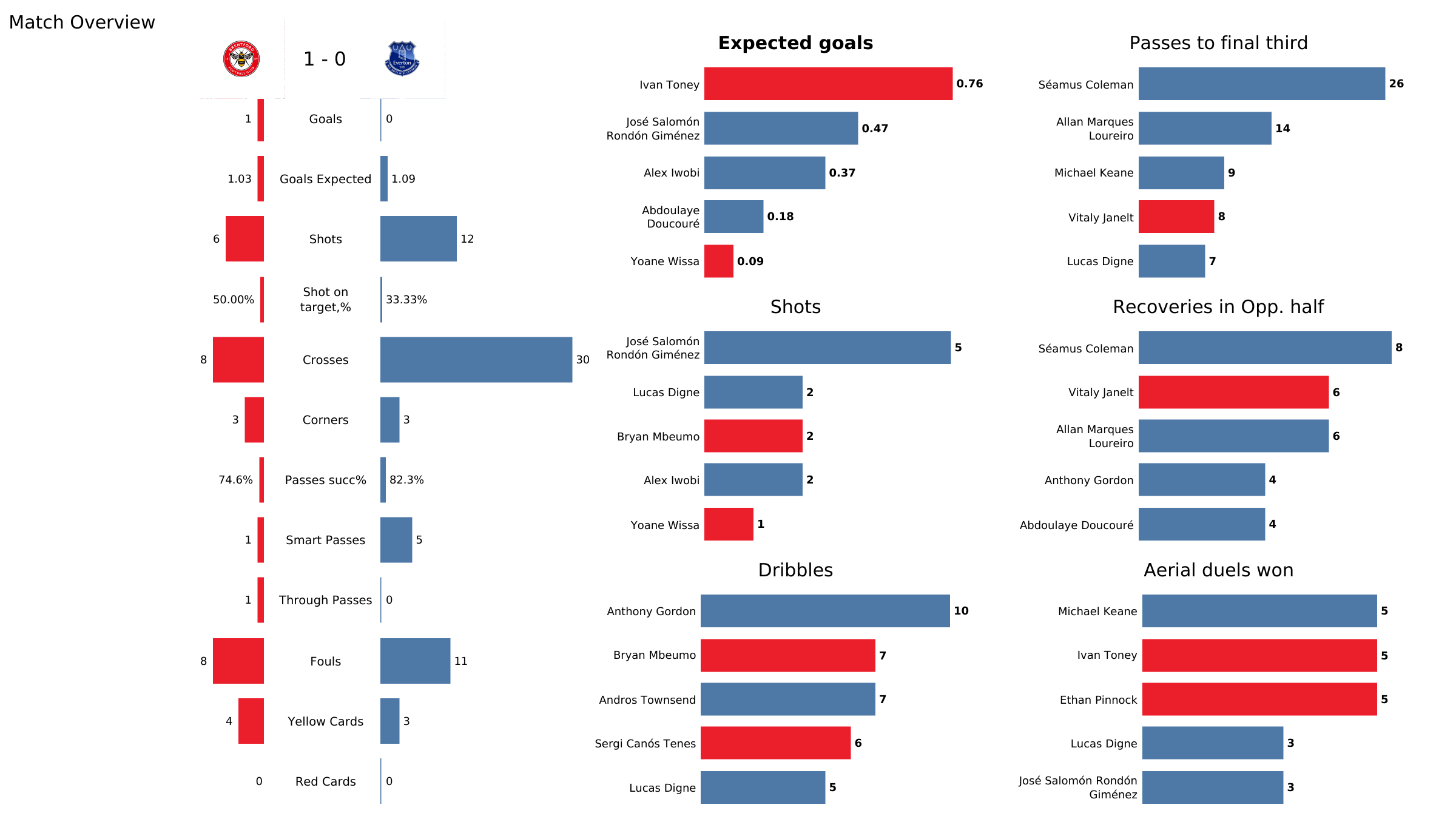 Brentford came out as the winners in the first meeting in the English Premier League between the two teams. Everton dominated the possession and created 43 positional attacks. They attempted 12 shots and managed to hit the target four times. Everton players attempted 30 crosses. The Bees created 24 positional attacks and attempted six shots. Thomas Frank’s men defended their lead and took the maximum points from the fixture. 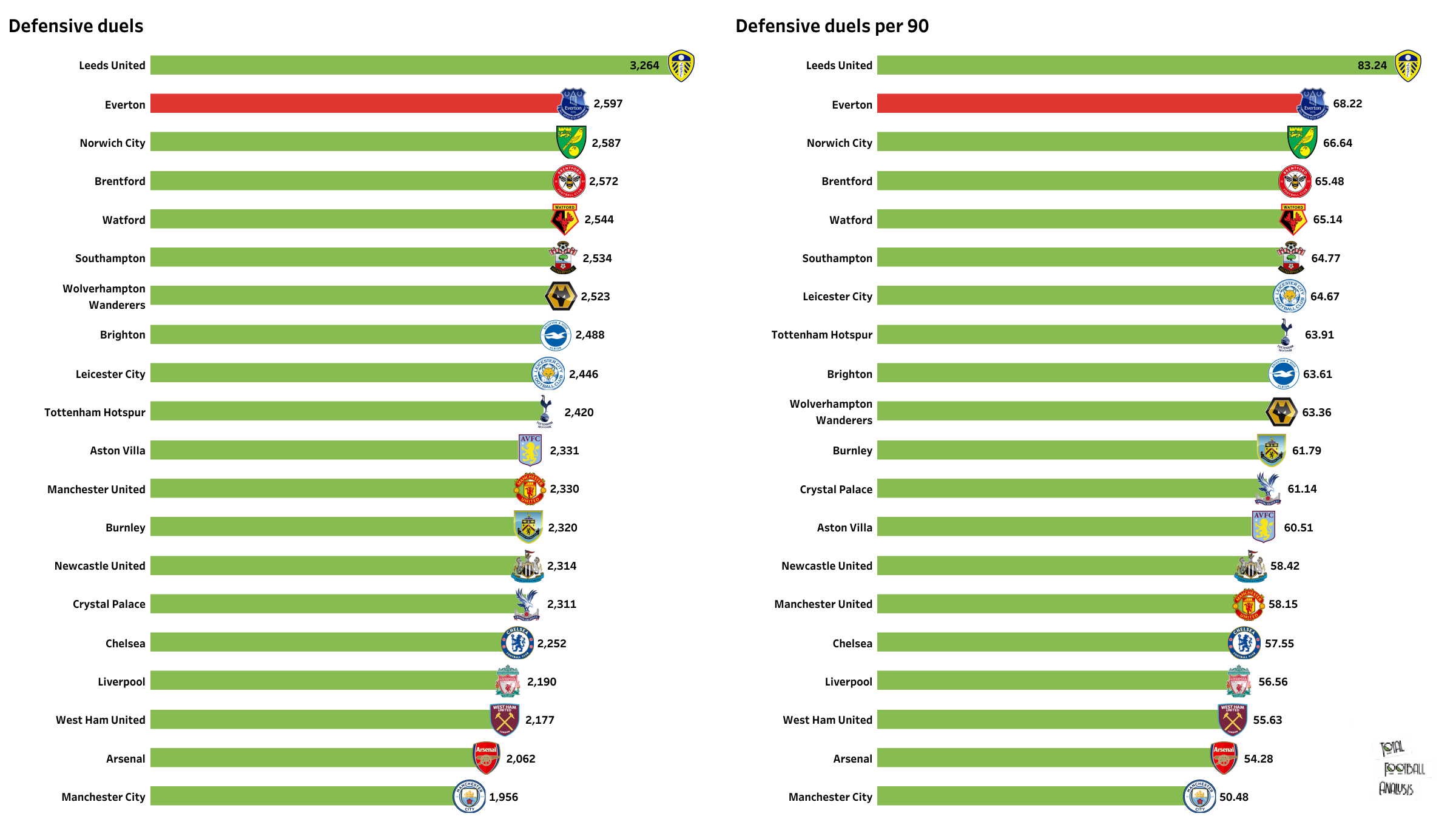 Everton are on a three-match unbeaten run and recently played a goalless draw against Watford. They have now won ten, drawn six and lost the remaining 19 matches. The Toffees have managed to find the back of the net 37 times with an xG rate of 42.64. In return, they have conceded 56 goals with an xGA rate of 51.16. Everton had to defend most of the time this season. The above viz shows that the hosts have contested the second-highest number of defensive duels in the league this season. Brentford are two places behind them in the above chart. 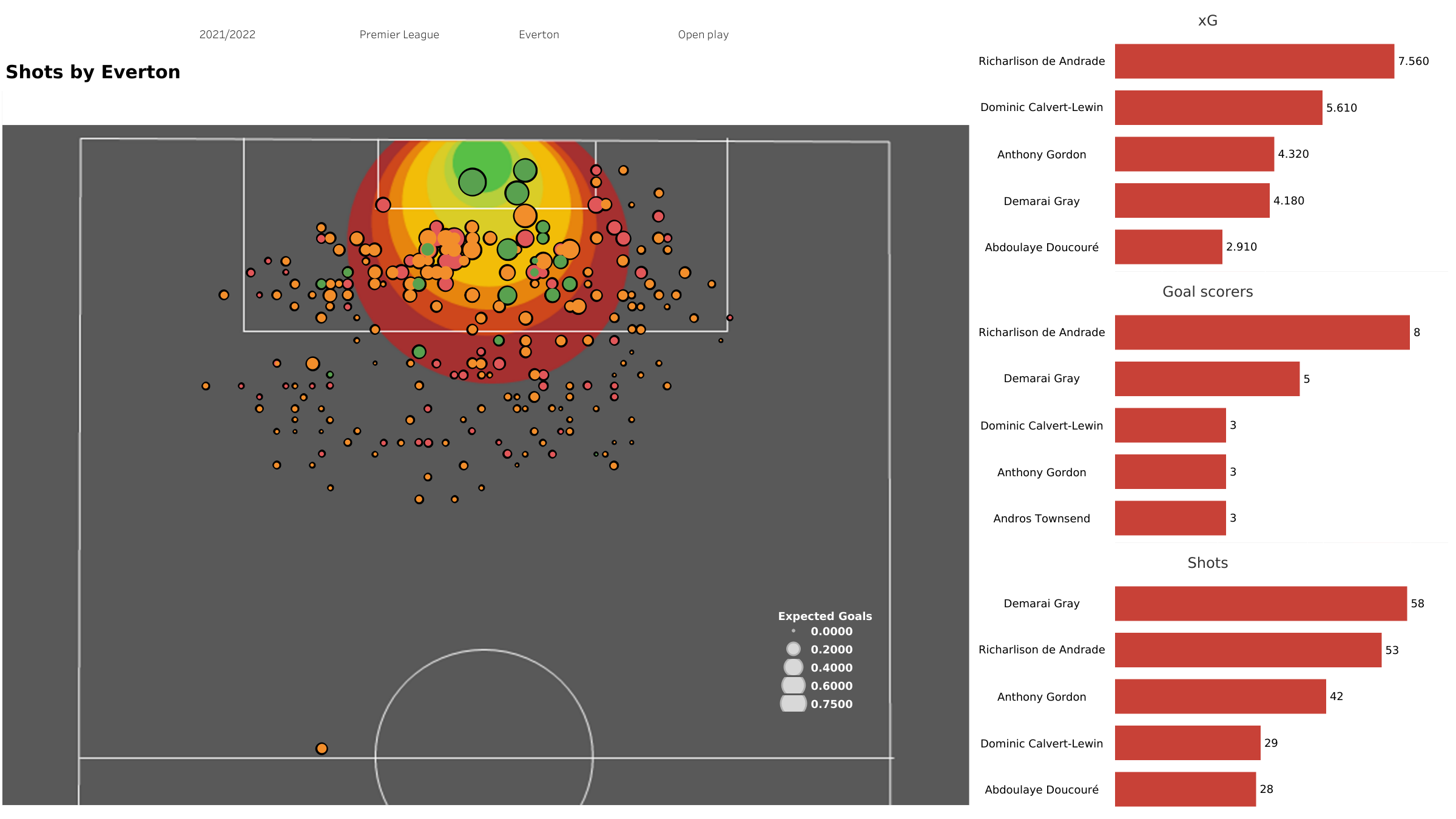 The hosts have attempted 381 shots with an average of ten shots per 90 minutes. They have managed to hit the target 122 times. A total of 227 shots have been attempted from inside the opposition’s penalty box, with 82 shots on target. The above viz shows all the shots attempted from open play. The Toffees have managed to score 20 goals from open play this season. They have struggled while going forward, and this is one of the reasons behind their current ranking in the league. 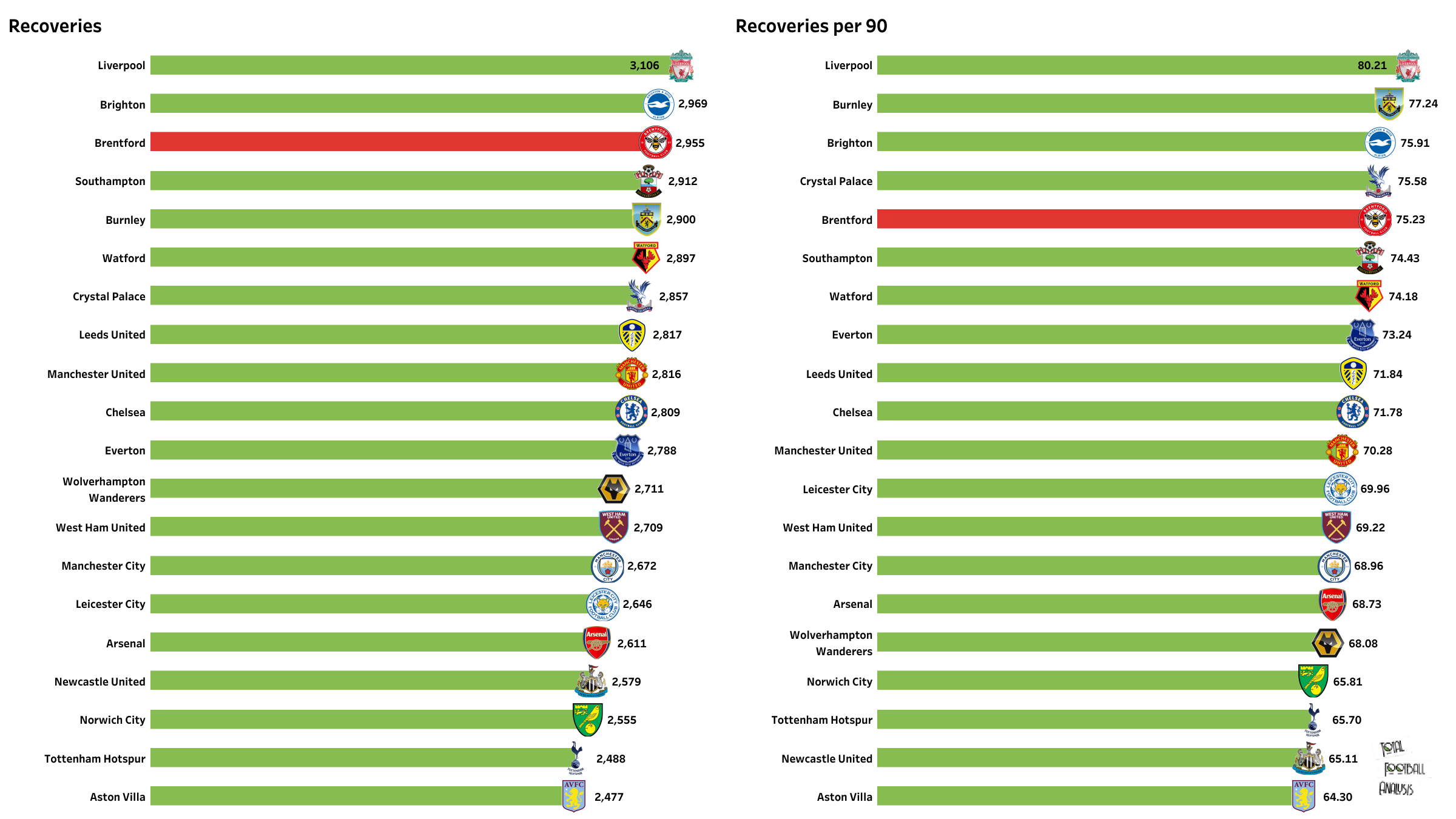 Brentford have won 12, drawn seven and lost 17 games this season. They are on a good run lately and have collected 19 points in the last ten games with six wins, one draw and three losses. The Bees have beaten the opposition goalkeeper 44 times and have conceded 52 goals. The xG and xGA rates of the team are 50.93 and 48.46, respectively. The above viz shows that the Bees have made the third-highest number of recoveries in the league. Of these 2,955 recoveries, 485 have been made in the attacking third, 1,218 in the middle third and 1,252 in the defensive third. 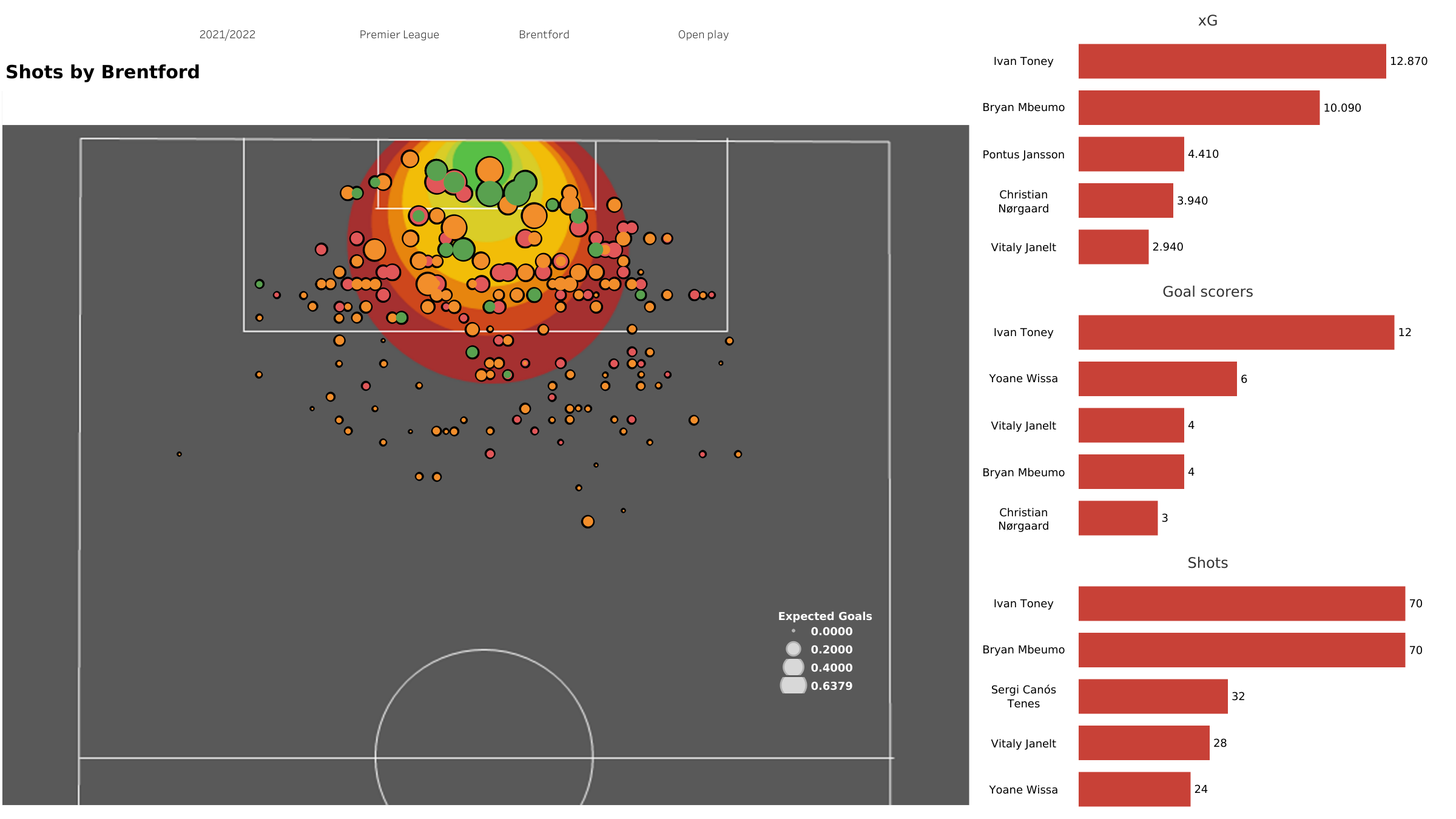 There are no fresh injury concerns for both teams. Ethan Pinnock could make a return to Brentford’s starting XI after missing the last game.

Everton will look to avenge their loss and move further clear of the relegation zone. They will have a tough task in hand against an impressive Brentford side. Brentford are a threat while going forward, and the Toffees’ defence has to remain on their toes all the time. They haven’t defended well this season and will have to outperform their opponents in this match.